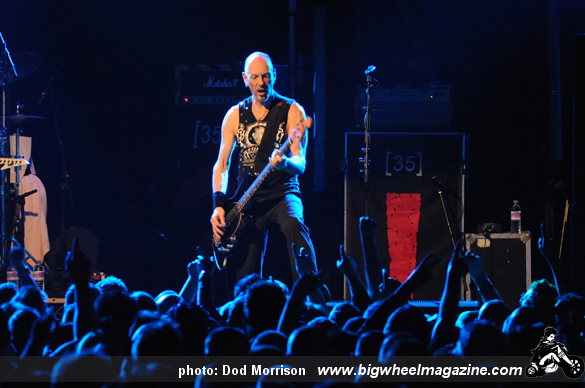 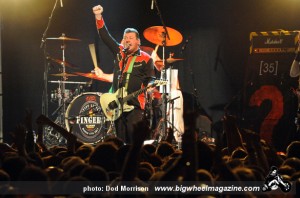 It’s a Monday night on Saint Paddy’s Day in the Gallowgate area of Glasgow, home of the city’s Celtic pubs as well as shops and stalls trading in Irish Republican and rebel chic. This has been the scene of Stiff Little Fingers‘ annual St Patricks day bash for more years than I care to remember. The Barrowland Ballroom maintains the faded grandeur of it’s sixties heyday and the ghost of Bible John probably still stalks the gloomy passageways and beer sticky dance floor.

I’d only attended one of these before, maybe about twelve years ago and my (albeit hazy) memories are of green and white hooped Celtic shirts and choruses of “hail, hail the Celts are here” from the assembled throng.

Not tonight, however. There are a few daft Guinness toppers and the odd leprechaun hat, but it appears that Stiff Little Fingers‘s core audience have bodyswerved the “honorary Irish” crowd and tonight is all about the band. This is a band that loom large in the city. There were a couple of legendary Apollo shows preceded by an early support slot with the Tom Robinson Band and they’ve been regular visitors ever since.

Like many bands of the time, they defined a moment for a lot of younger punk fans and filled a Clash sized hole for a sizeable amount of people in their initial incarnation. The first two albums are rightfully regarded as classics but I must admit, I fell away from Stiff Little Fingers not long after those.

With a new album (No Going Back) just released courtesy of crowd funding, via Pledgemusic, these old warriors have had something of a new lease of life. Bassist Ali McMordie is back and with a core of himself, Jake Burns, drummer Steve Grantley and guitarist Ian McCallum (who incidentally looks like the love child of Mani and Barrie Masters) they’ve been reinvigorated by this first studio record in over a decade.

Many of the sell-out crowd are approaching booze/anticipation overload when the lights drop and the intro music of Go For It kicks in. I’m driving tonight and have resigned myself to a no-alcohol night. The audience clearly didn’t get that memo and before the band are onstage I (and probably everyone within 40 yards of the stage) am wearing the best part of four pints of lager in my hair and jacket. I just don’t get that; you queue for 20 minutes for a pint then chuck it skywards? What’s that all about?

As I shake myself partly dry, Burns and Co stroll on to a heroes welcome. Straw Dogs (which my brother in law informs me they rarely played way back then) opens the set and is a furious, careening charge which has lost none of its vigour in the intervening years. Burns’ waistline may be slightly larger but the voice retains the righteous anger of his younger self.  Grantley’s martial drumming is relentless power and the band spin and scissor kick their way through the set.

McMordie is very much the unsung hero of punk bass men. His looping runs and thumping fills are driven by a plectrum technique that blurs his right hand. He’s clearly looked after himself  and despite the now shaven dome he’s all cool and sinew as he grins broadly at the crowd and his bandmates.  Tearing straight into Wasted Life, the years fall away from Burns and despite looking slightly uncomfortable at times, he’s at home in front of his people. My Dark Places, from the new album, is a somewhat personal account of his struggles with depression. The honesty of the lyrics are palpable and quite frankly, it’s a cracker of a song that I would easily put up there with their classics. Burns looks a tad lost in himself at times during it and one hopes the catharsis of performing it helps him. He tells us that it nearly never made the album due to it’s painful origins but McMordie convinced his old pal to use it. I’m glad he did. 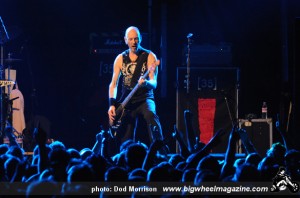 Ian McCallum takes lead vocals on Throwing It All Away and while it seemed a little odd to have a relative newcomer singing, the song fits the Stiff Little Fingers template to a tee and if it’s a portent of his songwriting, it bodes well. The band rarely stray from their signature sound and that’s just fine as far as I’m concerned.

Burns tells of his inspiration as way of introducing Strummerville. As a song it’s slightly weak amongst the material that surrounds it in the set, but it provides a real lump in the throat moment. As Burns pulls the final chorus to its conclusion, the crowd fill the gaps with the “Rock, Rock, Clash City Rockers” coda. As the band snap the song to a close, the audience continue the chant for a couple of bars and a miniscule nanoseconds silence before roaring the band (and themselves) to the old venues filthy ceiling. I think Joe would have approved.

Burns introduces The Specials Doesn’t Make It Alright as “a song we basically stole”; he’s right in his summation that the Coventry band agreed that Stiff Little Fingers’s version was better. The sheer dynamism of Burn’s slicing, ascending chords that bookend the verses take what was a fairly downbeat original song and fill it with the rage it deserves. This one was worth the price of admission alone and it perfectly illustrates what the band are all about.

Trying to get McMordie to speak to the audience before Barbed Wire Love is futile for Burns but the fondness between these two fairly shines from the stage. McMordie obliges by using his mic for backing vocals and not “as something for that skinny bastard to hide behind” as Burns laughingly puts it.  The song’s mid section “waltz” breakdown sees an arm swaying mass singing gleefully along.

Fly The Flag is introduced to great cheers by Burns’ tale of wishing he could dance on a recently deceased Prime Minister’s grave; When We Were Young is dedicated to old mate Phil Lynott with whom Burns spent many an evening following the split of their respective groups. There’s an unexpected pathos about much of tonight amidst the sheer joy of the early songs. One wonders if Burns’ battles with depression have driven more of the lyrical content than assumed and as mentioned, he sometimes looks a little disconnected from the audience carnage before him and the storm emenating from the stage.

Closing with a warp speed Suspect Device was expected but the sheer energy of Stiff Little Fingers’s debut single retains its gritty verve. The crowd, which has a pleasing amount of proper youngsters won’t have it any other way and before long, they’re back with a seething Johnny Was and an oddly sedate Alternative Ulster. The floor by this time is awash with lager and pulverized plastic pint pots. There are a few casualties reeling around and the security staff are keen to get home as they shepherd the happy throng out into the Glasgow chill.

The believers keep coming back every year. Now I know why.

Stiff Little Fingers. Still burning bright after all these years.