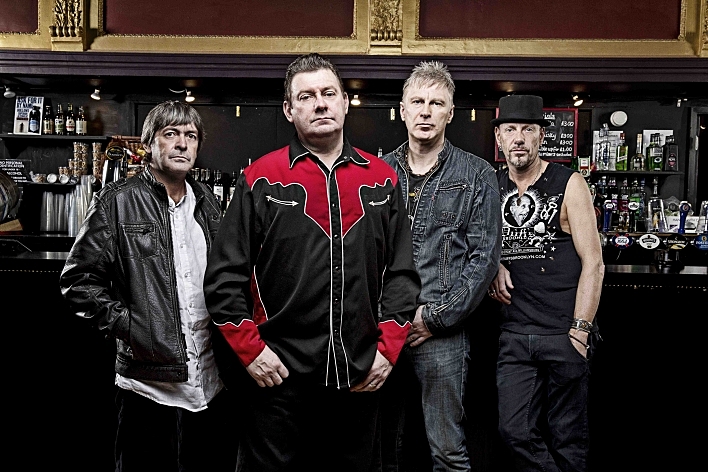 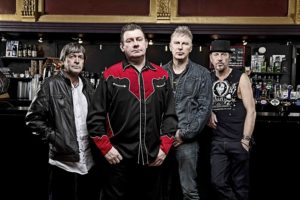 Vibrant distillation of the essence of Punk by Belfast legends.

“Everything under one roof” was the advice that Jim Bowen’s character Frank Cartwright gave to Brian Potter in Phoenix Nights. While the aging hotel impresario was referring to the future of the leisure industry, he could equally have been talking about a Stiff Little Fingers live appearance where the entire essence of ‘Punk’, and what it means to so many, is distilled into the sweat-soaked atmosphere of wherever they play.

SLF rolled into Chester on another wet August night as part of a short series of dates before their big ‘Fortieth’ bash in Belfast on Saturday where they will be joined by no less than The Stranglers, The Ruts and The Outcasts in what will surely be one of the gigs of the year. Tonight was very much business as usual, however, with the special brew of ‘Punk’ ingredients crammed into this confined space.

The songs are as good a place to start as any and what a back catalogue SLF possess. Opening track, Wasted Life is one of the ‘non-negotiables’ in the set list from debut album Inflammable Material. Often seen as a protest album about ‘The Troubles’, closer analysis reveals it is actually a ‘Punk-perfect’ document of teenage life as they saw it. Coming from Belfast it is inevitable conflict and terror will feature, but the music is so potent and irresistible they would still be legends, even if they had come from Norfolk and pondering life on the broads. Even so, the continued relevance of many of their songs is striking tonight and Wasted Life, with its message about youth refusal to be indoctrinated into joining a ‘religious’ conflict is particularly so.

It’s said that the music you grow up with as a teenager is what will stay with you for life and SLF are for many the perfect teenage band with songs such as Just Fade Away, At The Edge (which provokes a frenzied response from the crowd), Gotta Gettaway and Breakout. The latter was written by Jake Burns during his time as an inappropriate accounts clerk, having failed O Level Maths four times.

The atmosphere at SLF gigs has always been fervent, particularly since they reformed in 1987. It’s almost as if the fans are performing their own version of the Native American Ghost Dance; they’ve lost the band once but now think that if they keep moshing and pogoing it will never happen again. In these cramped confines tonight, the ‘mosh ritual’ is performed with as much vim and vigour as at any stage in their long career. Arguably, this is the true essence of ‘Punk’; the bond between band and audience born in the most frenzied period in British music history but built over years of mutual dependence, trust and shared ideals. The sparks when band and audience collide create enough energy to power the myriad bars that populate this ancient walled city.

However, to remain vibrant, you must be fresh and two of the most touching songs tonight are from most recent album ‘No Going back’, My Dark Places and Guilty as Sin. Jake Burns has always been very open about his battles with depression and, as he says when introducing My Dark Places, “just speak to someone” if you are suffering.

Another notable feature in tonight’s set list is the presence of the superb ‘kitchen-sink’ drama of Safe As Houses. Always a challenge in long ago bedroom sing-alongs, now we know why as Jake explains it was written in a key too high even for him and it has taken him over thirty years to work out that playing it a key lower will enable the perfect delivery we see tonight.

I never had the pleasure of meeting Joe Strummer but I know enough people who have to gain a measure of the man. What I believe is summed up perfectly tonight as Jake introduces Strummerville. An inspiration and hero to many, Joe Strummer always had time for everyone, always polite and left them feeling as if they mattered to him. He was a true icon and as big an influence on the band as they have been to their legions of fans and the inclusion of the song in the Fortieth Anniversary set list seems highly appropriate and a vital ingredient in the essence of Punk that we are experiencing under this roof tonight.

Maybe it is fitting that we turn to the timeless Johnny Was to represent the last vital ingredient of Punk. It is impossible to overstate the influence of Reggae on the birth and development of Punk and SLF’s reworking of this Bob Marley classic has always struck me as a very mature arrangement considering how young they were when they recorded it. The clashing of raw guitars set to a military drum beat alongside the ever-relevant lyrical content is as affecting now as it ever was and a track that you could lay before any curious youngster today and say “here you are, this is what Punk is all about”.

The evening is brought to a conclusion with a raucous Alternative Ulster before the sweat-sodden throng pile out onto the street, swapping stories as they go. All the classic ingredients of Punk, “under one roof” and delivered pitch perfect as ever. Stiff Little Fingers, forty years strong and still very strong indeed. On to Belfast.

Stiff Little Fingers play their Fortieth Anniversary gig with The Stranglers, The Ruts and The Outcasts on Saturday August 26th at Custom House Square, Belfast.