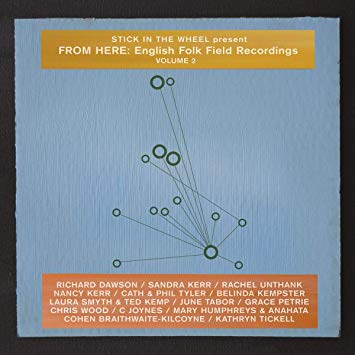 STICK IN THE WHEEL present:

The first volume of Stick In The Wheel’s English Field Folk Recordings (reviewed here) was a back to the roots revival of the old custom of collecting songs in the traditional way. Their second attempt has awakened and enlightened those non-believers as the folk music websites and national press run the risk of wetting themselves in excitement. Of course, we knew all along…

With Stick In The Wheel you don’t find too many frills.  Their music has brought openness and originality to the Folk music world in recent years and they’re a band who fit the Louder Than War “we are punk” philosophy to a tee. From here but out there

However, as they move on as a band, their This And The Memory Of This mixtape maybe gave an indication of their near future direction and whilst they may be uncompromising their forays into English Folk field recordings is resolutely traditional of which this is the second in what should hopefully be an ongoing series, is absolutely core traditional; the core of culture and identity.

Like the song collectors of yore but with the advance of recording technologies, they’ve again been around the nation to record established folk musicians alongside some of the emerging generations to seek their takes on what makes and gives folk music its unique ‘music of the people’ label. Artists who show what ‘from here’ means to them.

So it’s gratifying to see the folk club singers rubbing elbows with the likes of those whose names fit the legend bracket such as June Tabor on a similarly legendary The King Of Rome.  Nancy Kerr opens the set as well as rounding things off with her dancing fiddle and mum Sandra, yet it’s the younger generation that makes the boldest mark.

The pair of Grace Petrie doing one for the protest singers and Cohen Braithwaite-Kilcoyne’s dancing Two Lovely Black Eyes provide a highlight of the set and proof that the Stick In The Wheel philosophy ensures “everyone is equal.” It’s probably worth seeking out the bonus CD that includes his Drink Old England Dry as well. Like many Grace goes unaccompanied hand in hand with some lively instrumental prowess. C.Joynes’ rolling and tumbling Cottenham medley an early highlight. Along the way, you can cherish intimate moments where the tape (or whatever platform Nicola Kearey and Ian Carter used) captures the intake of breath from Cath Tyler at the start of Ladle/Richmond and where Richard Dawson almost cracks on his The Almsgiver – no autotune gimmickry here.

They all get the chance to explain their selection in the liner notes that provide an enlightening background that provides what becomes “a snapshot of the folk scene right now.” In two volumes of recordings, you can bet that some may have been lining up to be invited, some may have needed their arms twisting and possibly some may have dipped below the radar, but you can bet your boots that when the Volume Three journey begins, they’ll be battering down the door to be part of a little bit of history.

There are a couple of launch gigs coming up following the release. Details here:

11 May launch event at The Cluny Newcastle