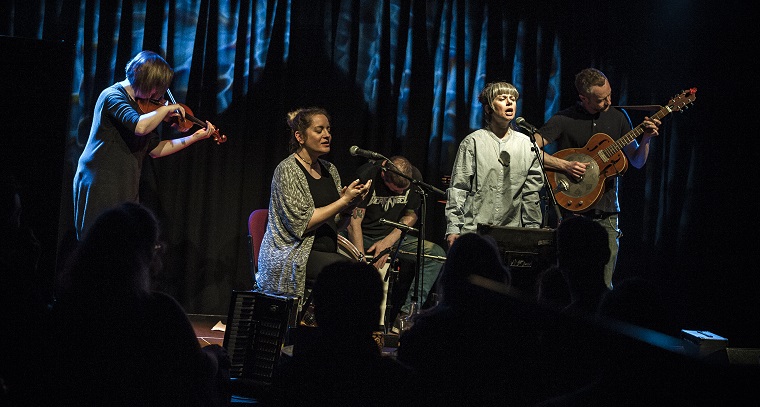 STICK IN THE WHEEL

Stick In The Wheel; a band embracing the past and defining the future. Folk music, not necessarily as we know it or fitting the broad the public perception, but an indication of how it should be done.

The momentum continues to gather speed with progressively more coverts jumping on board the bandwagon that’s filled with those who are rapidly realising that the Stick In The Wheel model provides an exciting vision of the future of folk by taking things right back to the roots. Deep ones. Their  profile raised by the likes of MOJO and The Guardian, the new album, Follow Them True with its 9/10 Louder review here, has already set 2018 on edge.

Their music has grown beyond their early endeavours where their spiky and raw approach which may have shocked in some quarters but certainly grabbed the attention. They still have the knack of conjuring up visions of Victorian England; not what they’ve called  “saucy tidbits of Victoriana” but  songs that soundtrack the times, sung in the streets by vagbonds and bottle washers and the common people in the alehouses and the alleyways. None, however, would have worn anything as outlandish as Fran Foote’s impressively yellow sneakers that prompted some musing over the fact that mustard rhymes with custard because they’re both yellow. Intent and intense but with moments of humour that are what Gordon Ramsay would call, as dry as the sands around the pyramids of Egypt. 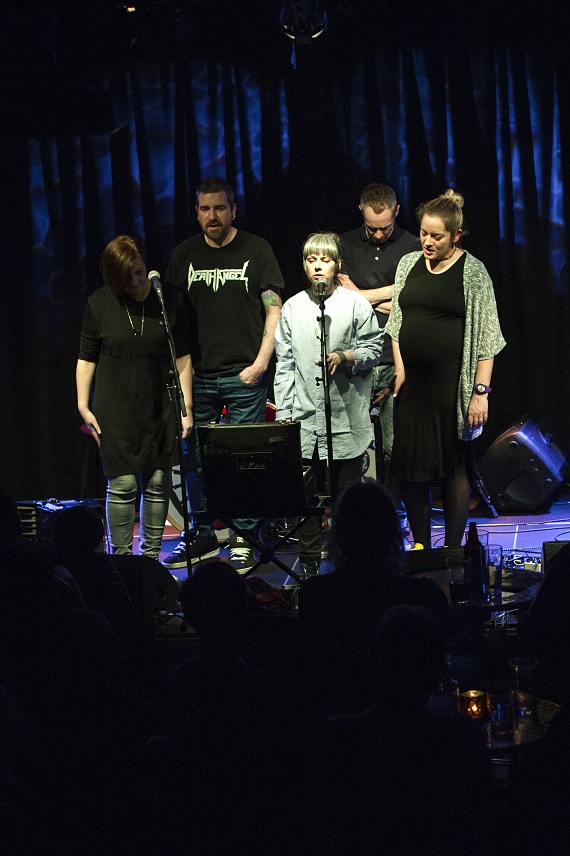 The mysterious suitcase stands centre stage, lid open but sans the Pulp Fiction golden glow while the band file on and declare the intent with Me & Becky – a song inspired if that’s the right word, by rioting anl looting. And nicking. The start of a series of songs about, for example, a horse, nutters (“can we say that?”) and bagpuss. The simplicity of their introductions belies the passion and the potency of the songs.

There’s a throwback to their last appearance in the same venue when someone fainted mid song (2015 English Folk Expo gig btw) – “don’t do it again, it put some off” deadpans Nicola Kearey then hopes the poor guy isn’t in the crowd.

All The things is stunning in its simplicity, just two voices and a guitar, lullaby-like although no ones is going to be lulled into sleep as the development into providing backing drones gets highlighted on Follow Them True, setting up  a haunting soundtrack from a couple of accordion buttons – less has always been more although a touch of reverb occasionally adds to the ambience that’s nothing short of inducing a hypnotic trance.

The thought occurs in Abbots Bromley Horn Dance (“an instrumental – not my idea”) a tune straight from the greenwood as opposed to their more typical fare, that Stick In The Wheel could soundtrack any remake of the merry eighties series, Robin Of Sherwood. While that core sound is wrapped around Ian Carter’s  raw and striking guitar and percussion that ranges from cajon and bells to handclaps, the regular short stabs of staccato fiddle often shift towards the more lilting,  typically on  100,000 years.

Following the rapidly rapped trip down White Copper Alley with The Cruel Ship’s Captain is another chiller / thriller – child exploitation, abuse and murder all in one song – it’s no wonder  they have to lighten the mood by following up with  Weaving Song (the opening notes highlight the Bagpuss reference ) that has the ‘Alouette’ sing-song-ness about it. At a push, Seven Gypsies  from From Here is possibly the pick of an incredibly strong pair of ten song sets; hearing the fine ladies responses sung  in broad cockney as the tale of the attraction to the migrant lifestyle unfolds  is a riveting experience.

There’s talk about English music having an identity, but one that sometimes gets lost. Stick In The Wheel are busy finding it, reclaiming it and nailing it,  with a hundred year old copper pin mudlarked from the banks of the Thames. Probably. Reinforcing their mantra that folk music is about where we come from, they step out for an encore of Poor Old Horse that encourages the spirit of  communal singing. One of the current crop of leading folk lights, Jon Boden, communal singing activist and supporter, would be bursting with pride.