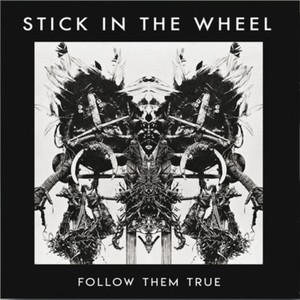 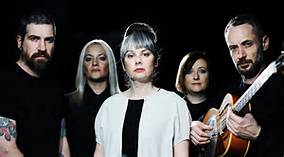 In 2015 Stick in the Wheel released their debut album From Here, (fRoots Magazine’s ‘Album of the Year’ and a MOJO ‘Folk Album of the Year’), one that revealed an invigorating set of stark pictures through songs, winning them  a whole glut of admirers who were stirred by their uncompromising approach. The  earthy, occasionally visceral,  depiction of a harsh realism was  a refreshing antidote to the mainstream vision of folk music.

After taking time to go native and get out into the field, sometimes literally, to collect and collate songs for From Here: English Folk Field Recordings , they’re set to kick into a new year with their new album, Follow Them True, which will be released 26 January 2018.

Grabbing tradition and culture by the horns, Follow Them True promises what they call “a product of the turbulent times we are living in.” A focus on the writing about shared experiences of the constant theme of struggle, it’s an album which is “a statement of commitment, a threat and a promise.”

Any attempt to try to paraphrase their typically forthright message is fruitless; it’s best to quote verbatim when they say:

“Any protest is implicit, it’s part of the very fabric of what we do. Not everything is revealed. The map is not the journey. Some of it is super-trad, some of it’s not trad at all. The vein that runs through it is our intent to reinforce the relevance of this music of forgotten ancestors, who were also everyday working people. This music has to cut through, this record draws that line from the past to now, the world is no different today to how it was before; we are collectively condemned to repeat the mistakes of the past. This is the sound of us reluctant to accept our own fate. Let’s turn the stone over. Let’s get at the grit. Let’s focus on English stuff because it is weird. It’s dark and surprising, it’s unashamedly odd and has a personality all its own. It’s uncomfortable, forces us to confront ourselves, unlike so much other music it’s not escapism. It embraces the good and bad of who we are.”

Look out for the Louder than War album review coming ahead of release.

Preorders with all sorts of stuff  here

Have a listen to the title track here: