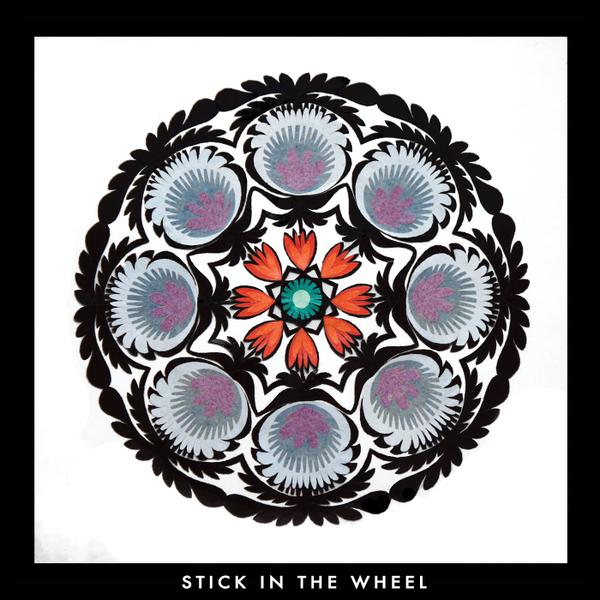 Stick In The Wheel: From Here (From Here Records)

London’s Stick In The Wheel find themselves borne on a wave of Folk Award nominations for best emerging act and best traditional track together with a showcase performance at this year’s Cambridge Folk Festival and now the debut album. Their frank and uncompromising style seems to be a refreshing alternative , bringing with them a wind of change which seems set to ruffle a few feathers.

“We play the music of our people. We sing in our own accents. We record in our kitchens and living rooms. This is our culture, our tradition.” They have been described as a raw, fresh take on English folk – which might actually gloss over the plain instinctive, intense and primitive nature of what Stick In The Wheel cook up and serve stone cold on their debut album.

Witness their website post after their showcase appearance at Cambridge Folk Festival (Louder Than War review here). “Cambridge Folk Folk Festival was just great. Packed Club Tent and good crowd.” No nonsense or hammy sentimental outpouring. To the point and you know you’re dealing with an attitude which refuses to kowtow or dress up what they do in anything but plain language.

It’s might not be pretty and it’s as from stereotypical folk music as you can get – neither woolly jumpers and real ales nor sexy young guys toting their fiddles and banjos, yet eminently folky in that the songs come from the people and the heart and with roots so deep that they can’t be seen. Perfect fare for the old ‘folk music but not as we know it Jim’ adage.

With song titles such as Jail Song, Bedlam and Hard Times, there’s an expectancy set up by simply reading the cover that the content is going to be harsh and uncompromising. It’s no frills, basic brand and straight from the gut. Nicola Kearney’s natural tones come accompanied by dobro, cajon, fiddle and handclaps provide the starkest of instrumentation – the dobro in particular providing an unrelenting driving drone. The deliberate recording in locations from warehouses to kitchens giving the authenticity and conjuring up images of Dickensian London – all Oliver Twist and Artful Dodgers, rolling carriages and a intimidating underbelly down dark alleys and passageways.

Telling tales of everyday life, carboot swindlers and city riots and the traditional songs of blacksmiths, prisons and asylums, the version of Seven Gypsies is a far cry from the traditional which has been passed on and around the folk scene. My Barra is one song which provides some light relief and Me And Becky has a friendly fairground styled vibe about it with a skipping rhythm that contrasts sharply with its subject matter, conveying the thoughts of an incarcerated girl following a rioting and looting session. It’s all very contemporary – “Me & Becky took a walk down the retail park”, stolen TVs and BlackBerries. Yet, for the most part Stick In The Wheel aren’t out to decorate the walls with flounces and flowers. We’re talking more like bare crumbling walls and cold stone floors – the perfect setting for the Stick In The Wheel recipe.

Hasp sees them at their most desperate and if the album is stark and unadulterated, then Hasp is positively skeletal; the bare bones. It’s the start of the end of the album, followed up by the pairing of By Of River and Who Knows, two pieces where the musical content of the album takes a twist, bringing the album to a close on a menacing note. Atmospheric and the other side of the coin from the band’s main instrumental signature, conjuring up visuals of thin mists stealing gently across the Thames, ominous shadows, something threatening never far away.

Nicola’s “We make this music because we have to” makes it sound like a trial; punishment coming in the form of prolonged exposure to the folk fuelled sagas of the record. Far from it. From Her’ is an uncompromising album and certainly brings home the bacon, delivering a breathe of fresh air albeit in the guise of a pea souper of a London smog. More spit and sawdust than spit and polish studio gloss from a band of folk brigands.

You can find Stick In The Wheel online here:  https://www.stickinthewheel.com/