STFU – What we want 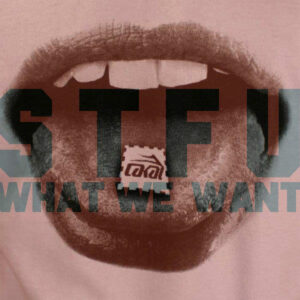 Alternative electronic maverick producer Dean Garcia, the musical mastermind behind seminal alternative rock band Curve and electronic dream pop duo SPC ECO, has joined forces with Preston Maddox of post-punk noise-rock band Bloody Knives in a new project, called S T F U. Both acts have quite the history and together they have crafted really long songs which give the listener the full emersion into each aural experience.

First song ‘Secret’ is in your face, euphoric, distorted and heavy as fuck. Nice throbbing electro baseline running throughout. Building up to a crescendo of noise before Maddox’s ethereal vocals come in. The vocals are then covered in distortion and electronic and with very downbeat tonal signing. ‘Second time’ follows quickly and is a slower track, but is just as noisy and distorted. Again we have the ethereal, yet distorted vocals singing about “easier the second time around”…

‘Do it now’ is more upbeat with an insistent, even disco beat. The vocals get more distorted and seem let the music take centre stage. It ends up being quite an experience! ‘Dead Right’ is slower more annalistic with the intense vocals, lyrics, delivery and spurts of noise. ‘New Shadows’ starts off very old school John Carpenter with a throbbing synth baseline and a bass beat bordering on early joy division lyrics and musical scope if he had survived to be part of New Order. Definite Depeche Mode influences too.

‘Deeper’ is a track full of lovely minimalist electronic at the start. Same deep and nihilistic vocals, swirling electronic and Space like sounds. ‘What we want really is the track of the LP with its meaty distorted baseline, with the great refrain “we can’t stop. It’s what we want”.

‘A thousand cuts’ is another measured and slower track from STFU. Dark and brooding. Lots of Depeche Mode influences, but not the strongest track on the LP to be honest.‘Trickery’ is another slower track as is track ‘Slow’ that more than lives up to its name and is surprisingly the shortest track of the LP.  Final track ‘Promise’ is very chilled out and is very reminiscent of NIN.

Having had firsthand live experience of Curve back in the day (supporting The Cure) you instinctively know you are going to get something special with this Dean Garcia influenced STFU project. It may not be perfect, but it has enough darkness, weirdness, noisiness and sheer boldness to grab you around the neck and force you to listen for a while. Good stuff!