Home Music Bands Steve Ignorant – Interviewed ahead of London gig with Membranes & others... 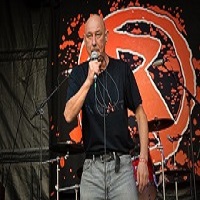 Coming up to the big event (Tickets from HERE by the way…more information on the gig from Facebook event page here)   what better way to wet your appetite than to than speak to the Crass legend who now heads Slice Of Life? Nowt really…

Being at the tender young age of late 40’s vintage I was a bit too young for the 1977 punk explosion that happened around that band I don’t even need to name.

I was seven years old when it all kicked off and I admit to being excited by this renegade stuff that was flashing around me as some of my family members were into the music scene and I heard loads of comments about punks and scum and all the rest.

“How dare you speak like this about the royal family!” etc etc etc. I was already on a sonic journey but what I’ll always remember was the big A’s on the back of black jackets thinking “that is scary”. Crass had me then. I’d heard about the hidden flexi discs in magazines and the outright anarchy that went with it and thought… Is this what music does??

And then I listened to them… So What and then the classic Big A Little A. I was only young but a sponge and this shit sounded raw and real. People reading this might say, but Wayne, you write about indie bands in a twee way and gush over all sorts. But that’s why who I am today. I listen to everything and appreciate anything that sounds good. Crass were different. They had a message. They built an image. They were intelligent. They were not thugs. And they wrote good songs which still stand the test of time.

Steven Ignorant attended the Louder Than Words festival in Manchester last year which was where I first met him and I was a volunteer doing the doors for his talk.

When I met him I was greeted with the kindest most sincere welcome from him and his entourage that I won’t forget. They herded in a load of school kids on a field trip and Steve tried not to shock them with his tales of avoiding flying glass ashtrays and gobbing. I used to shit myself when I met Crass fans and now I don’t know why….

I’ve caught up with Steven and asked him a few questions about what’s happening with the brilliant Slice Of Life and what we can expect from him on his latest tour dates.

What have you been up to since I last met you?

I’ve been running around all over the place doing gigs, studio work, a bit of filming and cutting the bloody grass.

How’s the new album coming on?

Very well – still some work to do on the tracks we’ve already put down and a couple more to record.

Slice Of Life’s last album Love And A Lampost is a massive departure from the Crass stuff, but tells some life aspiring tales. Are the old Crass fans bothered or are you as a matter of fact?

No, the older Crass fans like it. Ok it’s more melodic and mellow but I think people appreciate the subjects I’m talking about. I think it’s the younger Crass fans who find it difficult but then they’re very young and I’m coming from an older perspective.

What was the reason behind staging the Islington gig with Membranes and friends?

John Robb got in touch and said that an evening with those four bands would work really well and we agreed.

Who are your favourite artists at the moment and why?

But if you mean musicians I’m into Bowie’s early stuff when he was David Jones, Joni Mitchell, Miles Davis and I’m listening to a lot of soul at the moment. I could go on for ever.

Any chance of a Crass reunion on the cards or is that firmly in the past?

No, firmly in the past.

And that just says it all. Steve Ignorant. A punk saviour who just carries on with his intelligent music and prose. No big headed shit, just genuine stuff from a genuine bloke who loves what he does and doesn’t give a fuck whether we do too.

The Membranes Big London Bash  featuring Membranes with 20 piece Choir, Steve Ignorant and Slice of Life, The Cravats and the Wolfhounds is on 5th October 2018  – Tickets a value for money £15.  Event Page   Ticket Link