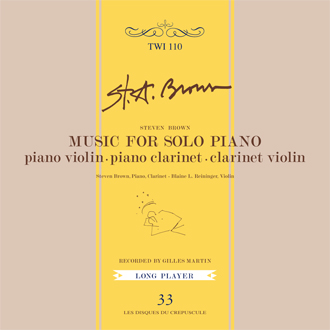 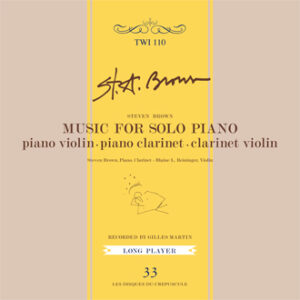 Reissue of Steven Brown’s debut solo album from 1984 with added input from Tuxedomoon colleague Blaine L. Reninger, plus nine bonus tracks in a similar format, with three coming from the modern ballet, Belly Of The Whale. Ian Canty ponders the crossover between classical music and post-punk on a grey January afternoon.

Well, one could be forgiven for saying this LP does what it says on the tin, but there is a bit more to Music For Solo Piano than just that. Steven Brown had been a member of Tuxedomoon since the band took shape in San Francisco back in 1977. Music For Solo Piano was his debut solo album, but began as a collaboration with his Tuxedomoon colleague, Blaine L. Reninger in 1982. With the latter’s exit from the band a year later, Brown was left to finish off the project on his own and it duly emerged in 1984.

Anyone expecting the kind of edgy electronics that Tuxedomoon specialised in circa the Half-Mute LP is in for a bit of a straightener. On Music For Solo Piano, we’re firmly in the quasi-classical field that appealed to a lot of the post-punk crowd as time went on and Brown was possibly one of the first to make the leap. Even the austere original sleeve design, restored to the version, bears an influence of the kind of graphics that adorned composers release. I’m not a great fountain of knowledge when it comes to classical music (much to the chagrin of my lovely music teacher at school), but from what I have heard and can remember, this kind of reminds me a little of the serene, timeless feel of Erik Satie. But I could well be wrong about that.

Taking it for what it actually sounds like, rather than playing spot the genre, this album is a melancholic pleasure and the restraint of the musicianship (which included viola and clarinet by Reninger as well as Brown on the old joanna) is just right. Brown’s piano lines are lyrical and emotional, filling in the gaps where words would have been and, in a sense, saying just as much. For example on Hold Me When I’m Naked, bass plucks and crashing chords give a curious scuttling effect and perhaps represents the natural impulse to take flight when forced to confront difficult feelings. This track veers close to musique concrete, but kept this listener rapt.

Egypt and The Fall were previously recorded by Tuxedomoon and Reninger’s viola makes its presence felt on both, being very much the lead instrument on the latter, with Brown’s piano not much more than a ghostly tinkle. Fantasie (sic) For Clarinet & Violin, a longer piece, has jazz swoops and evokes a strange atmosphere – you can imagine this sound-tracking a dance performance. R.W.F. is far more strident, almost a march and the lengthy set closer Rotterdam Lullabye (sic again) produces a very haunting atmosphere, with clarinet mournfully sounding over the viola. A memorable way to end the album.

Moving onto the bonus tracks, two takes of The Ghost Sonata are included, recorded for Belgian radio in 1983. They both are frosty and spine-tingling, tense, but lovely. Then we have Music No. 2, a stately gallop led by the viola. Three pieces including Basso Pomade have a full orchestral setting which tends to dominate proceedings. This gives them a slightly different edge to the pared-down sound of the album, but they are still worth hearing. The best of the three for me is the neat, off-beat feel to the viola/clarinet duet Licorice (sic yet again – this is how this is spelt on the LP sleeve, honest!) Stick Ostinato.

The last three tracks are the newest, being recorded in October 2018 for the ballet, Belly Of The Whale. These selections do hark back to the 1984 sound, but are a bit more playful. My favourite is the rapid changes in tempo of Melancolia (sic again!); with this you are obviously missing the crucial visual element, but it is easy to imagine how this piece knitted together with the dancers’ movement.

Music For Solo Piano is a pretty satisfying and unique creation, enjoyable and playful, at some times sad and others uplifting. Obviously a long way away from post-punk and even pop music, this is basically classical music in bite-sized pieces, with a left-field approach. But it is accessible enough to hold the attention of anyone prepared to try something a little different. You would have to be in the correct mood to get much out of this, but the melodies will embed themselves given half a chance and informative sleeve-notes plus stylish design make for an attractive package. Steven Brown took a chance with his first solo record like few others would and that is worth applause on its own – he also managed to fashion a pleasing collection into the bargain.