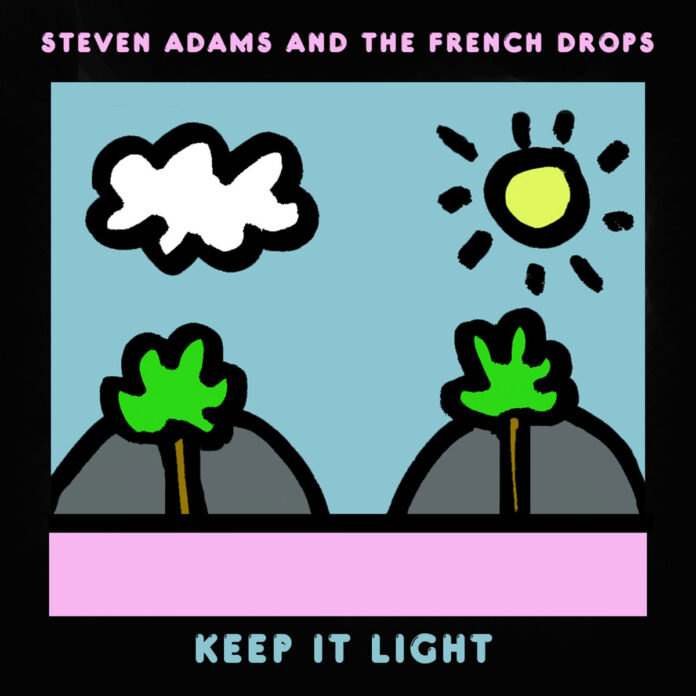 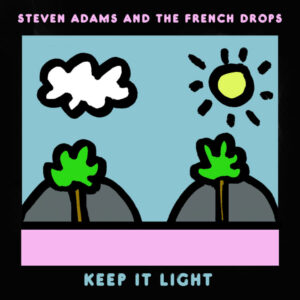 Steven Adams And The French Drops return with a brand new LP of indiepop goodness on the ever-reliable Fika Recordings. Andy Brown shares his thoughts for Louder Than War and tries to Keep It Light.

The Broken Family Band started life back in the early two-thousands and would introduce the world (or at least a lucky group of discerning indiepop/alt-country fans) to the songwriting talents of Steven Adams. Since then Adams has released music with The Singing Adams, a few records under his own name and, in 2018, the debut album by Steven Adams And The French Drops. He hasn’t released quite as many albums as Darren Hayman, yet Steven Adams has quietly become one of the most reliable and consistently brilliant indiepop songwriters in ‘the biz’.

Virtue Signals, the band’s debut, was a melodic yet no less incensed response to Brexit, the little England mindset and the people that, “need to divide us”. The new album is a markedly more personal and reflective affair born of an idyllic holiday in the South of France (ah, remember holidays?) and a desire to “keep it light”. Keep It Light certainly feels like a more laid back LP, albeit one that tackles racist siblings, panic attacks and a smattering of Twin Peaks-influenced blues. Well, you wouldn’t want it to be all smooth sailing, would you?

A lilting melody and acoustic, country-tinged instrumentation make Soft Landings a disarming and captivating re-introduction. “You don’t know” Adams sings over the swooning pedal steel “you don’t know what you do to me”. Harem Scarem’s Inge Thomson provides some impossibly gorgeous backing vocals just to top the whole thing off. Bring On The Naps might just be the most unapologetically joyous recording I’ve heard all year; an uplifting indiepop tune complete with some rather lovely and enthusiastic backing vocals from Steven’s kids. Let’s face it, we could all do with a good nap this year too.

Just as you’re getting comfortable the album takes a surprising left-turn. The woozy guitars that ache throughout Canary evoke the sonic sleaze of The Pink Room scene in David Lynch’s Fire Walk With Me while an unexpected sax solo adds a little jazz to the song’s dark, bluesy undertow. The result is astounding and quite unlike anything else Adams has produced. Gracechurch Street sounds equally fresh; a smooth, jazz-influenced melody complimented by some soothing harmonies and saxophone swing. Adams has always had a way with words and doesn’t let us down here: “things that don’t kill you/ can still chip away at your sense of self-worth and ruin your day”. It’s clear by this point that you’re listening to something pretty special.

Oh Dear strips things back, a gorgeous sad-eyed ode to lost love. “How you didn’t mean to wreck it and you wish you could forget it” sings Adams before adding a nod to the late, great Daniel Johnston, “and true love will not find you in the end”. This subdued moment is followed by a joyful cover of Going To Everglades by fellow indie stalwarts Herman Dune. Keep It Light is the sound of a band in a good place; relaxed, having fun and free to try whatever they want. Note To Self is a decidedly more tense piece; an earthy, confessional slice of Americana with a satisfyingly explosive edge. Despite the title the album finds the ideal balance between light and dark, exploring both with equal vigour.

Echoing the sentiment of the 1983 single Racist Friend by The Specials, My Brother, The Racist is a real album highlight. The song finds Adams confronting a very personal and difficult relationship, “My brother, the racist will die and I won’t know when/ Guess I’ll find out later, I can hold on till then/ I don’t wish he was dead but he can never be my friend/ That won’t change”. A song that tackles some issues explored in Togetherness and Bad Apples from previous records but from a much more personal perspective. An incredibly powerful song, wrapped up in a nimble yet urgent indiepop tune. This, ladies and gentlemen, is how you write a great song.

Jonny doesn’t have the same kind of emotional impact but introduces some satisfyingly fuzzy distortion into the mix, further widening the album’s sonic palette. The album comes to a close with the melodic brilliance of Mr Sunshine. “I found the last patch of sunlight in the city” sings Adams as he clings onto his newfound optimism “I’m bringing it home to you”. From its Cure-referencing album cover to its beautiful, well-crafted songs, Keep It Light really is a ray of sunshine.

If you’ve been out of touch with Steven Adams since The Broken Family Band days then I can’t emphasise enough just how much you need to reacquaint yourself. Equally, if you love your indie with heart, soul and melody and don’t know Steven Adams you’ve got a lot of catching up to do. In case it isn’t clear, this isn’t the indie of stadiums and endless, increasingly dull nights on the tiles. The French Drops have created an engaging, emotional, intelligent and beautifully crafted album. A varied, cohesive and downright beautiful LP, Keep It Light is a thing of pure joy.