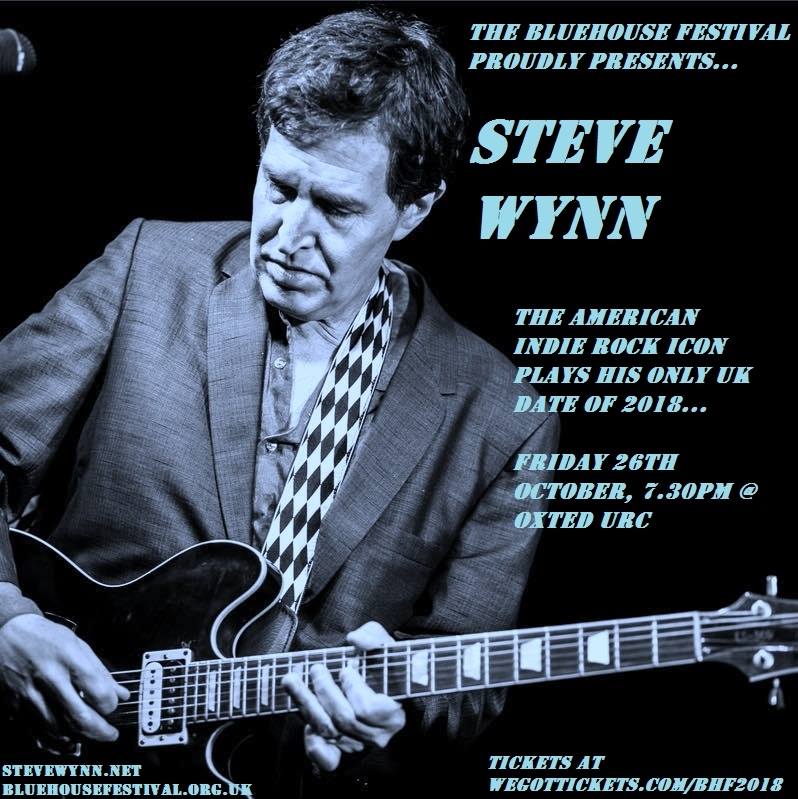 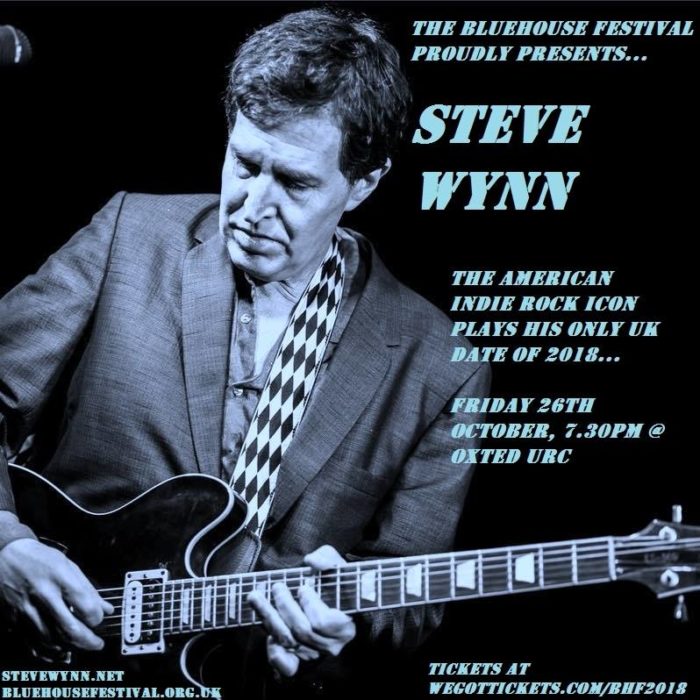 An icon of US indie rock and one of America’s most enduring singer-songwriters, it’s fair to say that Steve Wynn is ‘a force to reckoned with and cherished’ (Sunday Times).

Steve first came to prominence as the frontman of The Dream Syndicate, a band that helped define the burgeoning US indie/college rock scene of the early 1980s, before releasing a string of critically acclaimed solo albums in the 1990s and 2000s. The Dream Syndicate reformed in 2012, and released their first new material in 30 years with 2017’s much lauded How Did I Find Myself Here?

Steve has recorded and played with REM’s Peter Buck and Led Zeppelin’s Jon Paul Jones, and has played, by his reckoning, well over 2000 shows in around 30 countries, from the northern tip of Norway to downtown Tokyo. Steve visits Oxted (his only UK date of 2018 and his first visit to Oxted!) to kick off a European tour. Tickets are available here.

Randy and The Rockets, Surrey’s ‘best rock ‘n’ roll band’, will open the night. They will be showing a more rarely seen side, in their appearance at the festival, in a stripped-back performance featuring some of their own songs, with a few well-chosen covers thrown in for good measure.

The below interview was conducted by Dom Damesick and is reproduced with his permission.

Hi Steve. I know you’ll have played many shows in the UK over the years, but would imagine this is your first visit to Oxted! How did the show come about?

SW: I’m easy to track down – my website, social media, things like that. So, I get offers all the time and I’m especially interested when I’m asked to play someplace that I’ve never played before. That’s one of my favourite things about touring – seeing new places, meeting new people. I was already going to be over in Europe and I got a request to play in Oxted. It sounded like fun, it was logistically possible, I said yes. Sometimes it’s that easy.

Your first release with The Dream Syndicate was all the way back in 1982, and I know you still regularly play songs from those early days: ‘Tell Me When It’s Over’ and ‘The Days of Wine and Roses’ to name just two. What does it feel like playing songs that you released over 35 years ago, perhaps to audiences who are hearing them for the first time?

SW: It feels great. I’m happy that almost none of my songs feel dated or irrelevant to me or, hopefully, my audience. I just filter wherever I was back then to where I am now. It’s a psychic journey for me every night.

I just put out a book of my complete lyrics from 1982 until now. I was somewhat shocked and pleased to see that the book was almost 500 pages long, about 300 songs in all. It makes me feel like I’ve kept pretty busy over the years. And I carry most of those songs in my head when I take the stage and that gives me the chance to tailor my history to wherever I am that night. It’s all fair game–Dream Syndicate, Gutterball, solo records, even the Baseball Project! And it’s fun to filter those records through one voice and one guitar.

And after so many years in the music business, how do you stay creative? And still find the energy and motivation to play shows night after night?

SW: I’m lucky. I love my job. And the greatest thrill remains those lucky days where you’re writing a song or playing a show or recording and everything just clicks. Sometimes it can feel like you’re trying to catch a wave and that wave is never gonna come. And then–whoosh!–it’s there. That’s a great feeling. I guess that’s what keeps me going.

Now, The Dream Syndicate released their first studio album since 1988 last year, with the excellent ‘How Did I Find Myself Here?’ Do you think your sound, as a band, has shifted in that interim, or have you retained your core musical identity?

SW: Glad you like it. Without thinking too hard or getting too calculating, we were trying to make a record that would reference our history but feel current – both in terms of sound and also where we all are at right now. I think we succeeded. It really sounds like a Dream Syndicate record even though I’d be hard pressed to compare it to any one in particular. It’s where we are right now, or at least where we were two years ago!

And am I right in saying that the band are now working on a follow-up to ‘How Did I Find Myself Here?’ Will there be a sneak preview of any songs in your forthcoming shows?

SW: Probably not. But the album will be out in May so we’ll be back over and unleash the beast sometimes next year.

Away from The Dream Syndicate, you also co-front the band The Baseball Project, who write songs exclusively about baseball, and which includes such luminaries as Peter Buck and Mike Mills from REM; Scott McCaughey of The Minus 5; and Linda Pitmon, of too many great bands to name! Any aspirations to take this show on the road in Europe? Or are we just not ready for such an overload of baseball references this side of the pond?

SW: I’m dying to get The Baseball Project over to the UK. We’ve played shows in Norway, Holland, Italy, Spain and Croatia and had no problem connecting to audiences that didn’t know or care about baseball. At the end of the day, those songs are all just universal stories about things that affect everyone. Some of the most personal and heartfelt songs I’ve ever written have been for The Baseball Project. That’s it! I’m going to have to play some of them in Oxted!

And away from The Dream Syndicate and The Baseball Project, are there any other projects you are working on?

SW: There’s always something. I’m working on a record with the leader of a Norwegian band called Serena Maneesh. It’s a pretty wild punk-psychedelic record. And also new records, as we mentioned, by The Dream Syndicate and also a new Baseball Project in 2019.

And, finally, what is the one thing you hope to find time to do while visiting Oxted?