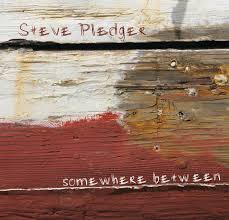 Steve Pledger, a man who  overcame the challenge of  ‘Striking Matches In The Wind’  (LTW review here) on his 2015 self-same  titled album. An album that  whetted the appetite of folk music lovers who enjoy the swing towards meticulous singer songwriting.    His  muse gets another  thorough examination  on ‘Somewhere Between’.

Unlike the aggravating noisy dog which gives its name to the first release (NDCD01) on the Pledger record label, ‘Somewhere Between’ fails to irritate;  more akin to contemplate,  investigate and  deliberate. Having successfully managed to strike a chord and earn deserved  acclaim with his sophomore work, his new album begs the question of what is he somewhere between?

Sounds like he’s at some sort of crossroads. Too young to be at a mid life crisis and too old to be one of Channel 4’s Inbetweeners or even at the same crossroads out of Clarksdale, Mississippi where Robert Johnson sold his soul to the devil  in a Faustian pact. Maybe more a philosophical junction as he confesses that  the songs  are about “transience and change; doubt and assurance” while talking about “what to accept and what to work harder to change and the need to come to terms with the unknown.” He appears at a point where the songs are informed by a maturity in his thinking which on the one hand recognises he can’t change things yet on the other, he knows where to pool his efforts. What the psychoanalysts would call controlling the controllables.

Much of which informs ‘To Change The World’; the SP response  to the question of whether  songs can change the world.  A resigned acceptance, contrary to what Bono may think . The song  also introduces drums – not something you expect at the start of an SP record, yet along with the  contributions of Lukas Drinkwater on double bass it adds a welcome sonic depth  to the trademark Pledger signature of passionate delivery over an inconspicuous guitar backing. And he’s an underrated guitar player at that although as a songwriter, his strength as an astute and observant lyricist is the signature that stands proud. Transgender, the welfare system,  depression and the story of a friend’s relative who was a miner in the early 1900’s get the Pledger perspective  and reveal that he has an angry side – not quite Frank Turner or Billy Bragg, all  fire and brimstone – yet with a considered dose of realism.

Ultimately, an acceptance of fate and karma and the bigger picture – the  “it was / wasn’t meant to be” mentality which might sound like something your Grandma would say –  forms the basis of ‘At The Last’. It also goes some way to answer  the question of where Steve Pledger is – a musician whose considered songwriting prowess,  which evolves from  that of his  guiding lights Springsteen (Bruce) and Joseph (Martyn), has brought him to a place where he feels at ease.

You can watch Steve playing ‘Other’ from the album here:

The album is launched officially with a gig at Dunster Castle on 4th November.  Details  here .

Steve is online and his website is at:  https://www.stevepledger.co.uk/

He tweets as @SteveMPledger and you can also find him on Facebook and his YouTube channel is here.