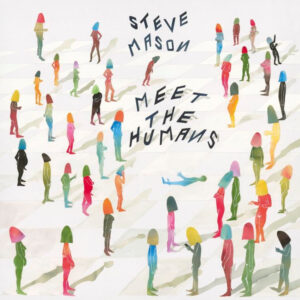 Former Beta Band front man, Steve Mason, has just released his latest LP – Meet The Humans. Louder Than War’s Stephen Murphy thinks he may have already heard the album of the year.

To say Steve Mason is one of the most important musicians of the last few decades, is to damn the man with homeopathic levels of faint praise. In-fact, it’s difficult to think of anyone releasing music today who has been so consistently ahead of the curve, and so immune to the fads, fashions and fancies of the record industry.

Right from the beginning of his music career with The Beta Band (and on early solo King Biscuit Time releases), Mason helped create music that was very different to anything being produced at the time, and without due credit, helped influence many of his 90s/00s contemporaries – both great and mediocre. You only have to listen to Oasis’s 2000 cheeky-bastard/Manc-magpie ‘homage’ to Mason and co. – the execrable ‘Go Let it Out’ – to hear the chasm that exists between genuine, genre bending savvy, and those who think that the addition of a shuffling drum pattern and twisty time signature, is going to turn fetid, unflushed toilet water into musical gold.

With the release of their 2004 career-best album – the wonderful ‘Heroes To Zeros’ – it seemed that The Beta Band were about to go stratospheric, and become the rarest of beasts – a band who could produce challenging, life affirming music that would also appeal to the masses. Heartbreakingly though, it wasn’t meant to be, and by the end of 2004, The Beta Band had collapsed under the weight of record company debt, and crippling mental health problems.

Whilst the breakup of the band was a shocking loss, the releases that followed (and not just from Mason), almost made up for the fact that the group no longer existed. Whilst drummer Robin Jones and keyboardist John Maclean eventually went on to join forces with original Beta Band member Gordon Anderson to form The Aliens (their two LPs – ‘Astronomy For Dogs’ and ‘Luna’ are both rather exquisite), Mason brought out a sting of albums that confirmed again and again, that the wee Scottish fella is more than worthy of the somewhat overused title – ‘massively talented blighter’.

So how does Mason’s new long-player – ‘Meet the Humans’ – stand up to his previous releases, both as a Beta Bander, and a solo artist? Without fear of overstatement, it’s absolutely the best record he’s ever made.

‘Meet the Humans’ opens with ‘Water Bored’, an uplifting jangly gem of a track, that from the second it kicks in, leaves you with a massive smile on your face, and the feeling that the hopes and desires kicked out of you by the unrelenting grind of daily life, can, and will be reignited. As is often the case with Mason though, ‘Water Bored’ is underscored with lyrics that are are part socio-political allegory and part love song, that will leave you feeling a bit cross about something, whilst at the same time, swooning like a lovelorn, hormonal teenager. You’ll dance! You’ll frown! You’ll feel like a rutting stag! Tremendous!!

Just as uplifting, is ‘Alive’ – a melodic and powerful slice of superior indie-pop that skips along like a run through a sun dappled meadow with your favourite guy or gal, but where as Mason’s vocal stylings normally sound sound like a mild mannered/honey throated Gregorian monk, on ‘Alive’ he occasionally dirties up his singing voice to add a thrilling sense of antagonism to what is one of the LPs most gorgeous tunes.

Check out Steve mason’s ‘To A Door’:

On a record where each song is on a rolling-program of being my new personal favourite, it’s perhaps the chiming guitars and horns combo of ‘Another Day’, and the piano-led delicacy of ‘To a Door’ that are the most affecting. They both best exemplify, that in many ways, ‘Meet the Humans’ appears to be a act of self-healing for Mason, and for someone who’s battled so many demons over the years, it’s astonishing that so much hope and beauty could emanate from one LP. Yes, the pain, injustice and cruelty of the world all get a look-in, but at its core, ‘Meet the Humans’ is a testament to the survival of the human spirit, and for the listener, is an all-enveloping warm hug and a whispered ‘I love you’ from an old friend. I’m calling it here and now – album of the fucking year.

‘Meet the Humans’ is out now on Double Six Records.