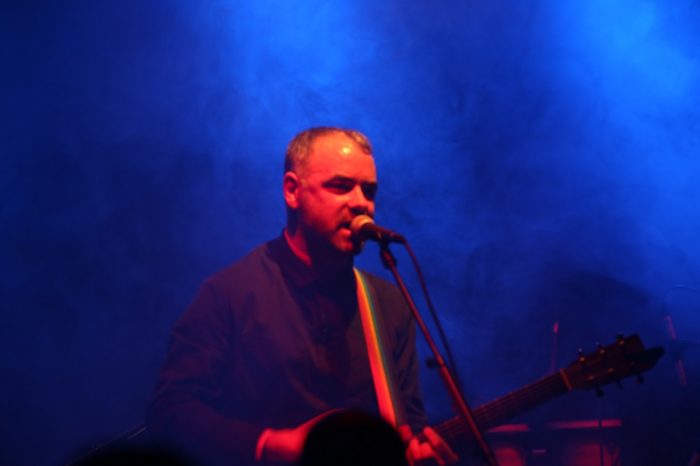 It’s often a mark of how relaxed artists are with themselves when they start delving deep into their back catalogue for tunes that previously they might have rejected.

Steve Mason has had a public battle with depression but tonight he is on great form even knocking out tunes from his Beta Band days much to the surprise of a packed room.

Mason has one of those rare voices that are not only pure but totally honest as he bangs out an unaffected version of Am I Just A Man which really sets the tone. The mournful Oh My Lord from Monkey Minds in the Devil’s Times really benefits from the muscular simplicity of the tight three piece set up he is currently touring with.

There is still a bit of willfulness about Mason as he insists on sitting down for the first part of the show much to the chagrin of the people at the back who keep shouting out for him to stand up. Does anyone really care when the music is as good as this? He could hang from the ceiling doing his thing for all anyone should care.

His latest album Meet The Humans is a modern classic packed full of high quality song-writing and Another Day is quite simply sensational despite a bit of a middle aged handbags fight breaking out mid song, Boys Outside is part of his desire to ‘kick the fuck out of depression’ as he forcefully puts it which certainly seems to be working.

The hard core fans who have loved Mason his since The Beta Band can hardly contain their excitement when he does Dogs Got a Bone from their debut  Champions version EP swiftly followed by Dr. Baker from the Los Amigos del Beta Bandidos EP. A welcome reminder why the folks at Q magazine placed The Three EPs collection at number 74 in its list of the 100 Greatest British Albums Ever.

Mind you his new stuff is just as good and a jaunty run through Alive was a joy. He closes a short but sweet set rocking out on Hardly Go Through giving it some Neil Young style riffing.

But he saved the very best for last striking up the opening chords of Dry The Rain and I thought the bloke in front of me was going to faint with joy. This is a stone cold anthem Noel Gallagher would love to have written, but old Monobrow just doesn’t have Mason’s vision. As he intones the chorus ‘take me in and dry the rain’ hands are thrust in the air and people lustily sing along as they are transported back nearly two decades.

As Mason walks off he seemed both shocked and pleased at the warm reaction but he shouldn’t be as he is one of our truly great contemporary artists with a glorious voice who has battled his demons to reach a point where he seems at peace with both his past and his future.

Meet The Humans is available from all good independent record stores. You can follow on Twitter @stevemasonkbt or find out more on his official website www.stevemasontheartist.com.