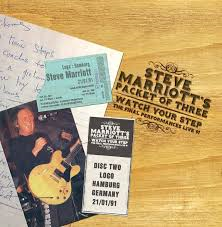 Subtitled “Final Performances 91” this collection does what it says on the tin, the last recorded live gigs of the ex-Small Faces leader with his band of the time….LTW’s Ian Canty hears the last stand of an ace Face……

Just to make it totally clear at the outset, the gigs documented here don’t represent a high point in Steve Marriott’s career. He was back on the club scene, which seemed miles away from his halcyon days in the 60s with the Small Faces or the later large-scale stadium American success of Humble Pie. Almost inconceivable today, someone of his stature (and I’m not talking about height) playing the smaller venues on the tour circuit. It seems cruel to say it but in 1991 he was either feeling artistically spent at this time or, looking at it more optimistically, simply keeping his hand in and getting back to his roots. The set-lists for all of these gigs are chock-full of classics, but sadly not much in the way of new material. The only thing that is vaguely new is Cockney Rhyme/What A Silly Song which is 50 seconds of acapella that has a hint of Chas and Dave’s Rabbit about it.

Watch Your Step – The Final Performances ’91 makes no bones about being aimed squarely at Marriott fans and Small Faces/Humble Pie obsessives, who won’t care too much about the sound quality on offer. It is what it is, if you were expecting a pristine aural experience well, you won’t get it here. Those hoping for new songs showing his creative spark back will also be disappointed, but there’s no doubt that even at this stage Steve Marriott was still a high quality live act, as is adeptly demonstrated here.

Although operating at a lower profile apparently these were much happier times for Steve, in smaller venues where he felt “at home” and his performance fears could be managed a little better. It perhaps seems odd that one of the best singers and frontmen this country has produced struggled so much with nerves, but that was the case. Various other demons did not help either, but working in these gigs seemed to suit him and his band, where the pressure was less intense. Also he was appeared to enjoy being a working, gigging musician away from the glare of publicity. However this stage fright (detailed in the accompanying booklet) manifested itself, it certainly doesn’t show. He seems well in his element as the cheeky chap of yore.

Disc one is from the second gig in this final run, which took place at the Half Moon in Putney. For this performance his old Humble Pie bandmate Peter Frampton was on hand and joins in on their Natural Born Bugie (a great version but fades out) as an encore. A possible, more formal collaboration between the two was mooted at the time and even got to the songwriting stage, but after travelling to the US to work on this Marriott soon decided he didn’t want to get on the super superstar merry-go-round again and nixed the idea. The sound on this gig I would put at just about good bootleg quality – a pretty clear recording, whoever had their finger on the “record” button did a fair job, but inevitably it is a little muddy in places. You can still hear all of what is going on.

The Marriott combo of the time the Packet Of Three (he intermittently had a band of that name for live showings since the 80s) were a good tight Pub Rock outfit and I don’t mean that in a demeaning way. I’ll wager if you had been in attendance at any of these gigs with reasonable expectations, you wouldn’t have left feeling short changed. Jim Leverton on bass (and a couple of lead vocals during the set) and drummer Alan “Sticky” Wicket were clearly both good players, but not in the league of his two most famous groups. Also, though a competent enough singer, I doubt many turned up to listen to Jim sing while Marriott just played guitar. Nevertheless, you can always hear him on backing vocals, that is for sure! Steve complains of suffering from the flu during the gig, but puts on a solid enough show. The set-list takes in both Small Faces and Humble Pie material and some of Steve’s Blues and Soul favourites from his Mod heyday and provides the basis for all four of the gigs included here.

Whatcha Gonna Do About It in this guise contains an element of the Stones’ The Last Time and the rarely played live Itchycoo Park gets a competent, if unexciting workout. All Or Nothing, the other Small Faces’ biggie to get played is thunderous, but does suffer slightly from Marriott’s self-consciously bawdy interjections towards the end.

Onto the Hamburg gig on disc 2, the sound here is slightly clearer. Though having much the same set as the Half Moon there are two additional numbers in Fool For A Pretty Face and Before You Accuse Me and on the whole it does seem like a slightly better performance as well (possibly down to recovering from the flu of the Half Moon date). They sound like they’re really enjoying it on a fine, rocky Watch Your Step and the Soul strut of Mr Pitiful.

Gig three has worse sound, we’re safely in bootleg sonic quality here, but you can still hear the singing and playing ok. It’s a fairly energetic performance, not markedly different from the previous German outing, save a couple of swaps in running order and Some Kind Of Wonderful being missed out this time round. The final offering emanating from Frankfurt returns to the Half Moon set order with the addition of the drawn-out soulful number Blues Before You Accuse Me as an encore. The fidelity is improved on this one, probably the best of the four in fact and added to that the band appear to be having a good time. They were a well oiled machine by this time and put in a convincing performance to end this set.

It’s a shame the detailed sleeve note seems to be missing a page to start with ( I understand this issue is a problem with some but not all of the boxsets and will be sorted out by Cherry Red for the repress). Other than that its a pretty full account of the last days of the Mod hero, that also gives the full story on those last aborted sessions with Frampton. You wonder with the set-list for these gigs how much Steve had left to give, but one hopes given time he would have re-located his writing muse and got back to his best. His voice was in great shape and there’s no doubt he could still more than hold his own on as an on-stage performer. Having witnessed some great comebacks over the years since his passing there is no doubt he could have returned to delight us once more, had not fate played its cruel hand.

Yes it’s rough and ready, audiophiles would do well to steer clear, but the raw passion that shined out of Steve Marriott is still detectable despite the slightly murky surroundings. One definitely for the committed and anyone new to his oeuvre would probably be far better served by starting off with maybe a Small Faces and Humble Pie compilation. The obsessives won’t care, happy that some more Steve is out there and having something that came from his “wilderness years” will prove attractive to them too.