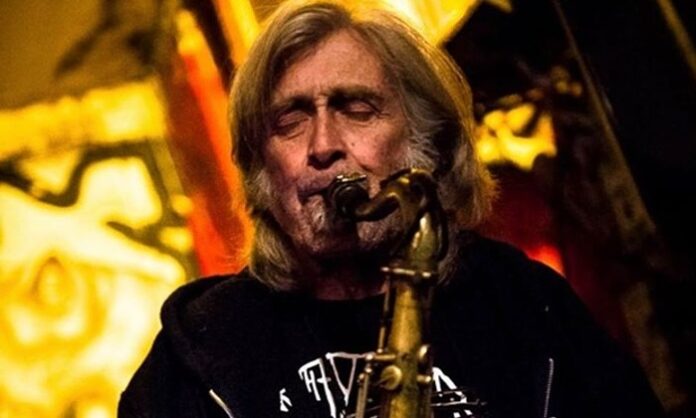 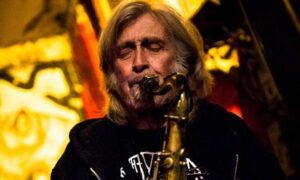 We were sorry to hear of the death of Steve Mackay – the Stooges mighty sax player – leaving Iggy as the sole survivor of the Funhouse album – arguably one of the greatest rock n roll records ever recorded.

The obits have been written and the death has been duly reported but,  for  a change, we thought we would celebrate just what Mackay brought to the band and to rock n roll itself as this is more than just a sax break on a dusty old track but the door opening to a whole new freedom in rock n roll that continues through the Birthday Party, the Fall, Swans and a million other sonic adventurers.

The Stooges, of course, are rightfully celebrated as the prime progenitors of the uber garage skronk, the lowdown bump n grind riff masters who took rock down to a new base level and created the template for punk rock ten years later.

This is an achievement enough and this idea of stripping rock away of its artifice and getting it back down to the hip swing thing is a glorious one and Funhouse has become one of the classic examples of this form.

What the Stooges did though, unlike so many other bands who have been on this trip is somehow to combine the primal and the feral with a case of the smarts. They may have been acting like the fucked up droogs and the wild two chord dogs and they did that very well but these were smart kids and their music has a complexity and deep intelligence hidden in its playful and dangerous dumb uberstomp.

And this is where Steve Mackay comes in.

What he did was take the garage rock shuffle and turn it into a free jazz weld that combined the two forms into an unlikely whole. He may have hardly been on the album but when he appears its a mind-blowing moment. His free jazz skronk and John Coltrane lines give the Stooges an elixir and rare beauty. I can still remember the first time I heard this holy album and, already thrilled by the cosmic, lunatic funk of the chainsaw scuzz being fired by this loose sax cannon playing all over the glorious noise of 1970. It was like life itself erupting from the guitar noise and gave the Stooges and quixotic and artful edge and a whole different tradition than being just the mere inventors of punk rock that they hardly seeking anyway.

The sax suddenly opened the door into just how complex this stuff was and made you listen back to the album and understand that they were not just gonzoid two chord hustlers but that ALL of their music had this sharp and deep intelligence and danger to it.

Suddenly all Ron’s truly brilliant guitar riffing sounded far more clever and complex than you had first assumed and the guitar freak outs made total sense as they soared above the bass riffing – they also were seeking the essence of free jazz and the glorious soaring of life itself and we more than the usual guitar breaks but assimilations of the freedom of the avante garde and all the true possibilities of the late sixties and left field musics that had escaped the commodification of rock n roll. It was the moment that the Stooges had some managed to make an album that was not only proto punk but also psychedelic free jazz, fringe left field and also neo prog!

Of course Mackay does not play on all of the album – he doesn’t need to. He was hardly even there – unless you have all the outtake of the album were there are some glorious moments of pure sax. He was only in the band initially for a few short months in 1970 when he joined, at the bequest of the Stooges singer, from local left field band Carnal Kitchen and he had left by October 1970 but when he enters the right hand speaker on 1970 his sax brings an unexpected and brilliant twist to the song and truly is, as Iggy would sing on one of the album’s other great tracks, ‘Loose!’. He truly is a brilliant player – the spirit of Ornette Coleman, and the idea of Coltrane and all the ancient, primal players are summoned as he blows the brilliant notes that flow from his sax like the juice of life as the band jam out in the studio . His slinky riffing on Fun House gives the song and added swing and his moment of punctuation are impeccable.

It’s the moment when the Stooges true artfulness and intelligence suddenly appears and makes them out as far more than garage gonks and gives them a future instead of a footnote and for that Steve Mackay we salute you forever.

It was was something we were enthralled with when we were young teenage kids trying to make music in the early days of the Membranes. We even had a sax player ourselves for a year and enthralled with the Mackay magic we gave our jazz loving sax fiend friend, Tim Hyland, free reign over a few tracks- some of which we even recorded for release (Spike Milligans and All Skin And Bone). it was our mini tribute to the great Mackay.

When the Stooged reformed it was thrilling to see him back out on tour with them – a very astute and smart move from Iggy who understood that his band were more than just a rock band  and yet again that his sax gave his band a different kind of edge, a different kind of noise and was a high point at the gigs that made the Stooges more than just a rock band.