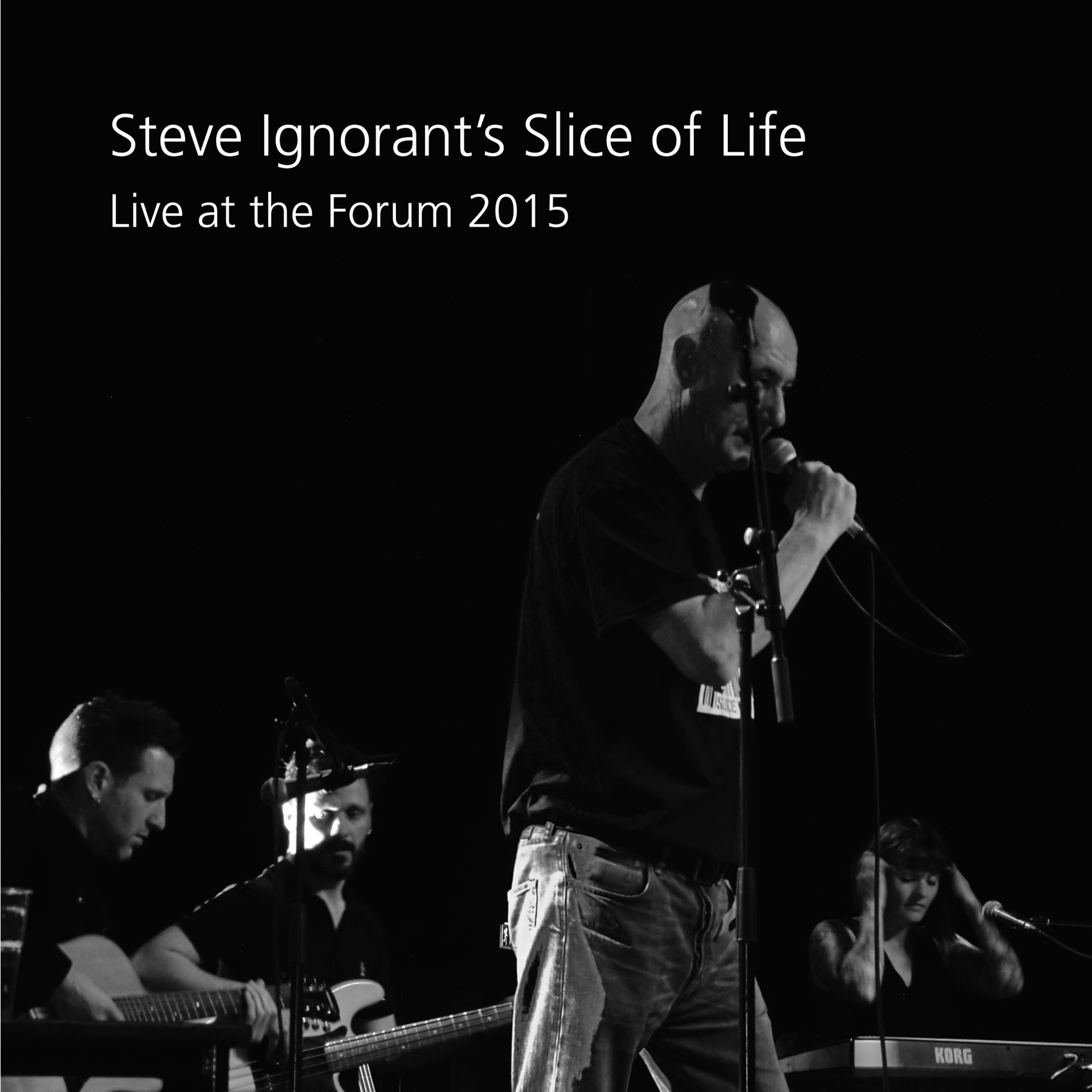 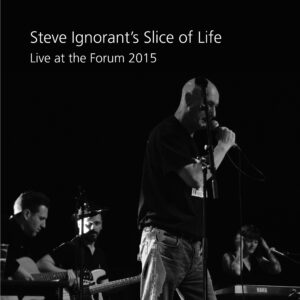 Brave is the word – but then, it takes immense self-confidence and a willingness to take risks to make it on any level in the music business – it helps when you happen to be the former frontman of Crass; a band with a fervent residual support base; however having met Steve on a number of occasions self-confidence is not a readily identifiable character trait; and when your latest foray into music is a semi-acoustic arrangement of piano, guitar and bass then you need to be able to rely on the quality of the material to overcome the initial bemusement of your audience.

The key here is the very quality of the song-writing, and the innate ability of the musicians Steve has gathered under the Slice Of Life umbrella; Mancunian pianist Carol Hodge first came to prominence as a teenager in the late 90’s then went on to perform with Electra Glide, Wrecks, and Bad Taste Barbie’s; it’s her measured use of keyboard that brings a sense of both drama and melancholy to this live recording captured during a Sleaford Mods support slot, the smokey, jazz tinged piano that underpins ‘Our World’ providing support and space for Steve to deliver a spoken word, rhythmic narrative railing against the inaction of politicians over the ongoing ‘migrant’ crisis – Steve spitting out the word, his lyric laced with contempt – there is as much power here as anything from the Crass back catalogue!

‘Love And a Lamp-post’ the title track of the 2015 album again utilises Hodges piano, but adds the refined bass of former Last Supper and long term Ignorant collaborator Pete Rawlinson on bass and brings to the fore Pete Wilson on guitar – the live setting elevates the drama of the delivery, Ignorant is nervous – you can hear this in his voice, and it’s this fragility that allows the tracks to connect with the clearly receptive audience; new track ‘Slaughterhouse’ is one of the more traditionally constructed songs, despite the acoustic instrumentation this has a joyous off-kilter pop sensibility to it that could easily grace day-time radio, the same could not be said for ‘Your Day Will Come’ which is built about a nagging looping piano and bass riff over which Steve’s disgust for animal abusers runs amok.

Flipping to Side 2 – don’t forget, this is a vinyl only release, a one-off pressing of just 300 copies so don’t hang around toying with the idea of buying it – opening with ‘Eleven Chimneys’ the juxtaposition of the delicacy of the music, and the Cockney snarl of Ignorant shouldn’t work, but work it does; there is no hiding the honesty of the material, these are not complex or intricate compositions, and as such they connect instantly, that’s not to say there isn’t room for exploration; ‘Stretford Blue’ is darkly foreboding – storm clouds are gathering, the lyric heart felt and intense.

‘Live At The Forum’ perfectly showcases Slice Of Life, the songs are crafted from life experiences and Steve’s wry observation of such, the message maybe (ever so) slightly less aggressive than that of Crass, but it’s no less vitriolic.