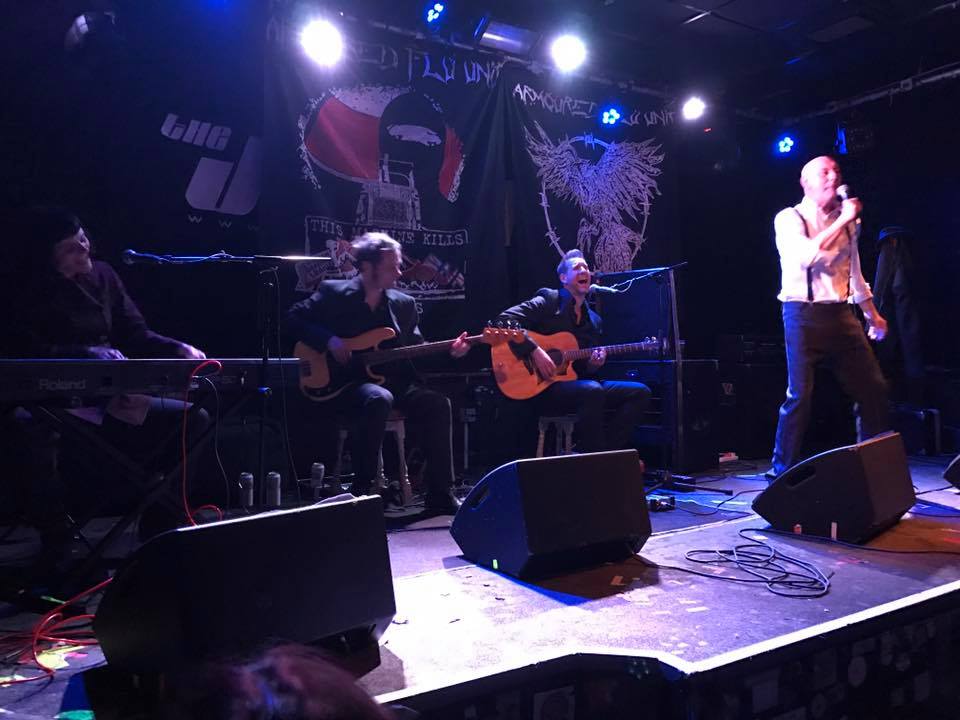 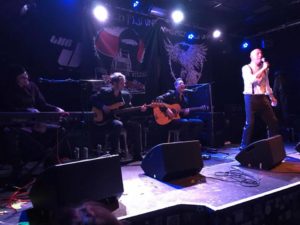 Steve’s first gig in Southampton for many, many years. Ged Babey missed Crass at the Ashby Centre Youth Club in 1980, so wasn’t going to miss this.

It is deeply ironic that a man who gave himself the name Ignorant is actually the most open, friendly, polite ‘geezer’ you’re ever likely to meet.

“Hello hero, hero hello..”   I should’ve said to him (I thought afterwards..) but he’s not really a hero.  In the words of the little kid in Whistle Down the Wind he’s ‘just a feller’.  Albeit a fellow who was part of a group who changed countless lives.

One of the first things he said to me was ‘Have you met my wife?’ She was busy selling merch but I did later and she was equally as down-to-earth and charming and full of pride in her husband and the love & respect he gets from the people who attend his gigs.

Call me a pedant (You’re a pedantic bastard Ged, and a whinger..) but the fact that this was promoted as a gig headlined by Steve Ignorant Open Brackets CRASS Close Brackets, irked me.  The band are called Slice Of Life. There’s four of them. Steve is the lyric-writer and focus of course but it is not Crass. It’s a world away.  A venue has to get metaphorical bums-on-seats though so putting CRASS on the posters theoretically pulls more punters than Slice Of Life. (Although I see the band have called themselves ‘Steve Ignorant’s Slice Of Life’ on the latest posters)

Suitable support acts have to be found too. But are ‘power-violence’ hardcore and heavy-duty punk bands the right fit to open for an acoustic quartet singing Brechtian songs with delicate piano?  Despite these reservations and quibbles this still worked as a brilliant mid-week night out.

I’m not dissing Hack Job who I missed completely (free download album here) or Our Mutual Friends (Ang) – as both are great, dedicated, rip-roaring bands

Carol Hodge, Slice of Life’s piano player and arranger happened to stand next to me during Armoured Flu Units  support set.  I recommended she listen out for the ‘Stop the Killing’ song and see if she noticed any resemblance to a Dick Dastardly and Muttley theme tune.  It finally appeared at the end of the set after a rousing and well-received rendition of (you can’t say)  Cuntyside Alliance ( without saying Cunt).  I didn’t notice whether Carol joined in with my “Nab Him Grab Him” heckling.

Once onstage Steve Ignorant only takes one song before he discards his suit jacket and hat. The songs from the Love and a Lamp-post album seem to have developed in a live setting.  Sections which are quietly spoken in the studio are more strident and accompanied by gesticulation and almost miming as Steve punches, points and taps his head, punctuating the lyrics.  It is a stripped-down yet theatrical approach – which I guess is what Brechtian means.  Basically, you can’t take your eyes off him. He is a compulsive performer but reverts to being a blokeish geezer between songs.

The fact that Steve toured with  Sleaford Mods’ because Jason Williamson was an admirer, has in turn meant that the Mods approach and manic energy has rubbed off on Steve.  Slice of Life could’ve become a bit too cosy, sit-down and folky but that’s definitely not happening.  This was a great set with light and shade but quite a bit of kicking and screaming ( Or banging and shouting, like a kid gone wrong).  A song with the refrain Just Another…Just Another… seemed to be an emotional outpouring and was a set highlight  ( Of course I discovered later it was an old Stratford Mercanaries song called Stretford Blue) embellished with some great Aladdin Sane piano by Carol.

A couple of David Bowie covers towards the end were great fun and nicely performed.  Five Years in particular though did show that Steve is not a singer in the conventional sense; but a great performer, a true exemplifier of anyone-can-do-it and proof that music, punk, freedom of expression (A-R-T) is important and life-affirming.

Going to see SI’s SOL should not be about ‘brand loyalty’ to Crass or Anarcho-Punk – it should be about being a part of one mans life, songs and journey (maan) dodging the slings and arrows of outrageous (mis)fortune. And because he writes songs about truth and love and the everyday triumphs and struggles of us against them….

The best thing about Steve Ignorant is that he has retained his sanity, integrity and doesn’t feel the need to live in the past or live up to any preconceptions people have about him. And it’s brilliant to see that he is, in the words of everyone he spoke to offstage (probably half the audience I imagine) ‘a really nice bloke’ as well as a great, original artist.

Flowered Up – A Weekenders Tale

Interview: Blueflint – Mike Ainscoe talks to the band whose music...

July 19, 2017
We use cookies to ensure that we give you the best experience on our website. If you continue to use this site we will assume that you are happy with it.Ok