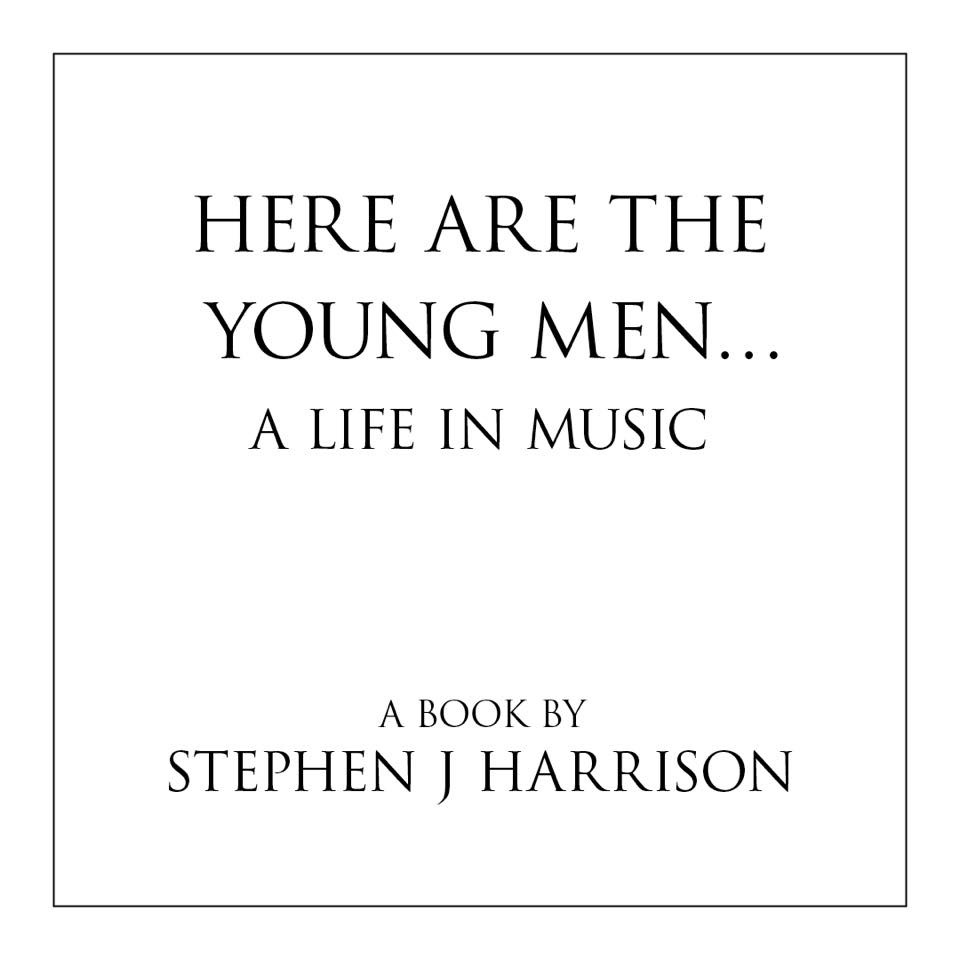 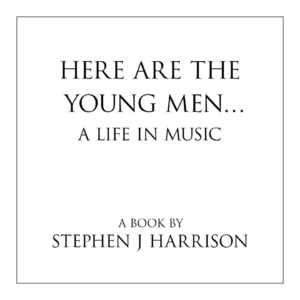 Steve Harrison was at the very heart of the Madchester scene, managing one of thee great bands of the era, The Charlatans, helping them and other bands achieve worldwide success. Starting up his own music shop, going onto seeing bands he managed play at the biggest venues in the world, to seeing band members sadly lose their lives, Steve has seen and done it all. With all this and so much more in his memory tank Steve has decided now is the time to release his stunning book Here Are The Young Men…Life In Music, scheduled to be released by Unbound Books next year. Matt Mead catches us with Steve for this exclusive interview for Louder Than War.

A book of insider stories drawn from the music scene of the North West in the days of punk, Madchester and acid house.

The music scene of North-West England from the late seventies through the nineties is the stuff of legend: written about, argued over, praised and disparaged, it still exerts a powerful influence on anyone who writes, thinks about or plays music. At the heart of it all was someone few outside the North-West have ever heard of – Steve Harrison. Steve started and built Omega Records, the record shops all the local bands shopped in, and went on to run the labels Dead Dead Good and Transworld, managing The Charlatans, Alfie, Peter Hook, Monaco and many others. He saw it all: the great clubs (the Wigan Casino, the Electric Circus, Eric’s, the Boardwalk, the Hacienda); the great bands (Joy Division, The Fall, The Chameleons, The Stone Roses, Oasis) and the great characters (Tony Wilson, Caroline Aherne, Craig Cash, Ian Brown, Noel Gallagher are/were his good mates; Ian Curtis was a neighbour of his family, Bernard Sumner, Morrissey, Tim Burgess, Johnny Marr were customers). It’s a book about the business of music (deals, t-shirt and ticket touts, bootleggers, payola, gangsters, fraud, the labels, touring, promoters) but also the joy and the madness of taking raw talent and creativity and turning them into something bought and loved by millions. It’s about the rewards and perils of fame.

If you love music and the people who make it, you’ll love Here are the Young Men.

The book is written in collaboration with novelist and Times journalist Mark Hodkinson and will have a foreword by Peter Hook.

LTW: Can you tell me a bit about your upbringing?

Steve: I’m one of two. I have a younger sister. We are from Mancunian/Cheshire stock, and the family settled in the Northwich area. Dad got a job as an apprentice engineer at Foden the truck-builders. Dad worked on the shop-floor and ended up as a departmental foreman until the business sadly closed-down having employed over 3000 people at one point.

There wasn’t a whole lot of music around our house, but I can recall being given a batch of records from a local pub jukebox where my Mum’s cousin was landlady. There was I Can Hear Music by the Beach Boys, a Link Wray single, the song Apache and I think Telstar. I distinctly remember the Capitol Records centre on the Beach Boys record.

When and how did you first start to get involved with the music business side of things?

I played in bands, from the punk era, and I was particularly inspired by Joy Division.

I always wanted a record shop. I worked at a clothing manufacturer until I had saved enough money, and with this, some help from Mum and Dad, the Government Enterprise Allowance Scheme and a friendly Bank manager called Stephen Hodgkinson I opened a record shop in Winsford in Cheshire, having first sold Northern Soul records at a few all-nighters in the north-west. This was 1982. My first helpers were Mike Christie; now a film director and John McGee who is a tour rep for Kings of Leon.

I always surrounded myself with good people.

Were The Charlatans the very first band you got involved with?

No. I helped a band called Treatment Organisation get a record deal with a label called Native; they had previously signed the Darling Buds.

Treatment was along the lines of 23 Skidoo/ 400 Blows/Portion Control/Test Department/ A Certain Ratio. Keo Martin from the band still plays nowadays and does a bit with ACR. I also supported other local bands and musicians such as tTe Train Set, the drummer Adam (Halford) and I previously played in News from Nowhere. Adam is Dad to the girls in The Orielles. I helped a friend/customer along called Pat Smith who was in a band called Silent Passion. He remains in the music industry and at one stage booked shows at the Sydney Opera House.

The Dead Dead Good label was a big part of the Madchester scene. Was it an exciting period for you personally? Or was it a challenge for you as a manager of one of the biggest bands of the time, The Charlatans?

It was an amazing period. My Omega Records stores (then in Northwich, Crewe and Altrincham… later Wigan, Winsford and Macclesfield) sold tickets for the likes of the Boardwalk and the International and we were very involved at the Warrington venue Legends where an Omega staff member Russ Pearson was DJ.

It wasn’t so much a challenge as an opportunity. I had already decided to establish a label with the idea to release records without UK deals associated with the Paisley Underground scene.

I was also talking to an English band called The Prisoners and looking to acquire the rights for the band’s albums for re-issue. Through this line of enquiry; I met Martin Blunt from Making Time. Martin ended up forming The Charlatans with Jonathan Brookes and Robert Collins. Effectively I was asked by Martin to join him putting this band together, and with no early interest that meant we ended up signing The Charlatans to the label, then Katherine E.

The immediate ‘indie’ and ‘dance’ success meant that the master plan was put on hold. So DDG would not become a UK home for the likes of Miracle Legion, The Rain Parade, Husker Du, The Replacements, Green on Red, The Church, The Three O’clock, Lets Active etc.

However; I did later attempt to attract USA artists such as Yo La Tengo to the label.

What are 5 of your all time highlights as manager of The Charlatans? 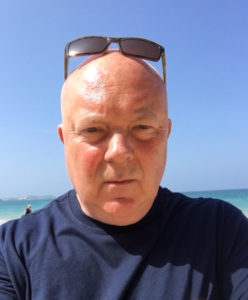 Fast forward and you are about to release a book all about your time with DDG etc… what can readers expect to see when they purchase the book?

A straight-forward and honest account of my life so far with a particular emphasis on the music industry.

It will be informative, educational and real. There will be no sensationalism, no reinventing stories to suit agenda, it will be the way it was and indeed remains in my world. Mostly, good stuff, some real funny stuff, some flying by the seat of your pants stuff, and some tragic and lots of emotional stuff.

Against all this there will be a backdrop of me growing-up, and the things that inspire me, from record shops, football, youth culture, casual culture, scooters and cars, punk rock, to business of music, travel, deal making, (not) deal making, and working with talent and moreover the people who helped realise and optimise the talent. The rich, the famous, the deluded, the good, the bad and the ugly sides of life. From the humble Saturday assistant in the record shop to the person appearing for England Football Team last night. There is one consistent… it’s about people, and the stories associated from the catalyst which was Omega Records.

Will there be any surprises that you’re releasing in cooperation with the book?

Peter Hook is writing a forward for the book.

I’m looking forward to speaking more on the Q&A circuit, and there will be a book launch night in Manchester based around the same.

What are you up to these days Steve?

The mantra continues and it’s a case of Here Are The Young Women too!

I work in sports management as a Director at a firm of lawyers. I still do a bit in music and film with the likes of Mark Gill amongst others. I’m an events speaker and open to opportunity as and when. Essentially I’m a management consultant without all the wanky corporate shit.

We have family homes in Manchester, Cheshire and Cornwall. Life is good and I’ve been happily married for over thirty years to Jude. We have a wonderful grandchild and a second on the way. I remain a Manchester City season ticket holder and I still drive fancy motorcars across mainland Europe which is an immense passion along with wine.

Thanks for the interest. Keep On Keepin’ On.

If you would like to pledge to receive a copy of the book you can do via this link. Steve can also be found via his Instagram, Facebook,and Twitter pages.