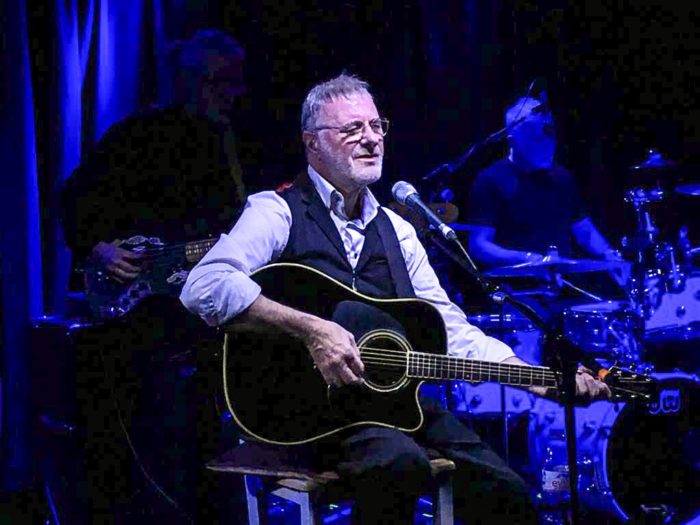 Walking through Shepherd’s Bush on Friday afternoon, you could tell it was a lot of people’s last day of work before Christmas. This was largely by the number of people who were no longer at work, no longer behind a computer screen, sitting instead behind a glass of something more fulfilling than emails. It was that day people were calling Black Eye Friday, the day, seasonally, most likely to result in a punch in the face for revellers out on the town. My good lady and I, were highly vigilant, therefore, for any rebellious Cockneys as we walked to Nell’s Jazz and Blues in West Kensington to see Steve Harley and Cockney Rebel that evening.

Having seen him three times since he broke his hip early this year, Harley has been ever more the rock-star raconteur. He was clearly aware of this, deliberating how performing from a seated position has made him more talkative. ‘Confessional’ was the word he kept returning to, not in an “I shot a man in Reno, just to watch him die” kind of way, but rather in an unfiltered, unfettered, unaffectedly personal way. It’s refreshing. There’s no ‘fourth wall’. He ought to have been in EastEnders by now. Every bugger else seems to have been. He’d be perfect in Albert Square: humorous, rugged, avuncular, and with a heart of gold, but when he gives you the look, you just know you wouldn’t mess with him.

He talked fondly about family. He mentioned how talking about family with family in the audience in Bexhill had made him suitably emotional as to get his words wrong for three songs. He spoke movingly about his year on the polio ward in Carshalton when he was twelve, when he met Charlie Watts of the Rolling Stones. When he sang, “Hold on to adolescent dreams,/ Stay free and open,” on Journey’s End, you could see that he exemplified this advice meant for his son, as any good Dad should.

The rebel came out through his speech at frequent intervals, bemoaning how the lunatics are taking over Asylum UK before dedicating Ordinary People to the ordinary folk who’d had Christmas ballsed by some Herbert farting about with a drone near Gatwick. He introduced Ordinary People with, “We released this one as a single not long ago. That was a fucking waste of time,” before reflecting on how financially dead recorded music has become.

You’re guaranteed that Steve Harley will, regularly, make you smile. He may be 67, but in Terry Jones’ finest Life of Brian falsetto, he’s a very naughty boy. Who knew that he’d done the score for a Viagra advert too? When you think of the connotations of ‘come up and see me’ and the resultant glowing outcome in his signature song, then it’s not surprising he was hired. Naughty old Steve, of course, asked if they’d rather not use Mr Soft instead.

The band were suitably impish too, happy to be playful with songs. Sling It gave us wah-wah piano, a Doors-like instrumental and then some folk/jazz violin. Best Years of Our Lives were pushed towards the superlative aspect of the title by solos from James Lascelles and Barry Wickens. The opening run of Here Comes The Sun, Judy Teen and Psychomodo (and a good afternoon’s drinking) were well placed to remove audience inhibitions early.

Considering it was supposed to be Black Eye Friday, there was a pleasant joy in the room throughout. Steve confirmed he was incapable of ever retiring, which got one of the biggest cheers of the night. We got all the songs that we both wanted and expected. We sang. We drank. We danced. No-one disrobed (Steve did take his natty jacket off to at least one wolf whistle, though). Someone did manage to circulate a load of Party Poppers during the “ooh-ooh, we’re having a party” section of Mr Raffles that were deployed in the band’s direction. I was nervous that someone might go apeshit with a can of Silly String, but mercifully I didn’t need to intervene.

It was quite the Christmas shindig. Come Saturday morning there’s bound to have been a few hangovers knocking around.

You can find Steve Harley online here. He is (kind of) on Facebook and Twitter, in the sense that someone else does it for him and saves him the frustration and faff.

All words by Jon Kean. More writing by Jon on Louder Than War can be found at his author’s archive. He tweets as @keanotherapy. Featured photo also by Jon. Other great photography by Jon can be found in your imagination.