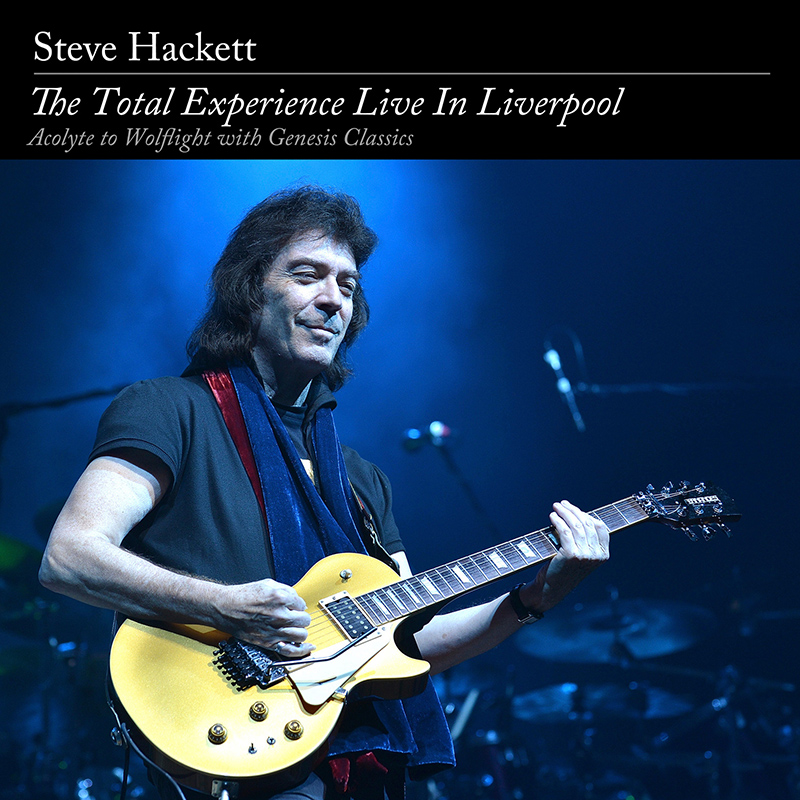 Steve Hackett’s been touring his Genesis Revisited II album in various forms since 2013, doing frankly a roaring trade. Not just revisited and extended but giving the fans what exactly what they want. The allure of Hackett delving into the definitive early seventies output of one of the greatest prog rock bands has been a worldwide draw. Records of the tour in the form of Live at Hammersmith and Live at the Albert Hall are now accompanied to form a holy trinity, by a record of the most recent venture taken from Liverpool’s grand Philharmonic Hall.

The Total Experience might sound all encompassing but it completes a round of touring which has seen the Hackett organisation come full circle. From his homages to his Genesis past in both recorded and live performance, 2015 brought  the opportunity to also celebrate the fortieth anniversary of his first solo flight with 1976’s ‘Voyage Of The Acolyte’. A fledgling journey which provided the spark for his decision to follow his own varied and ultimately highly successful  path.

And while there was the experiment with surround sound in the theatres on the tour adding to the ‘total experience’, the labelling of the tour as  ‘From Acolyte To Wolflight with Genesis classics’ was perhaps more apt as  those two albums (2015’s ‘Wolflight’ being the album recorded during breaks in touring) made for the bulk of the ‘solo’ set which preceded a trip back into the archive.

The band added Flower Kings/Transatlantic guitarist Roine Stolt to the ever changing bass slot, plus there’s  a special occasion appearance from occasional band member Amanda Lehmann and always a delight for fans to see  John Hackett step up to duet with his brother. This time adding his flute to ‘Jacuzzi’ which follows the closest you’ll get to seeing a Hackett band unplugged and Steve strumming away on the 12 string  on ‘The Loving Sea.’

Splitting the show into two halves and  even stretching towards three hours as Steve himself indicates, it proves impossible to shoehorn a forty year solo career into just over an hour, especially with a new album to promote at the same time. The new material naturally gets a feature as does a  healthy selection from ‘Acolyte’ and while some may bemoan the  big chunks of the solo output, vast as it may be,  being overlooked, fans loved the inclusion of ‘Icarus Ascending’ as the curveball in the set. The second half is probably much more satisfying with a set of Genesis classics,  some for the first time in the Hackett Genesis adventure, some for the first time in a very very long time.

Over the past couple of years the band have proved themselves more than capable in backing Hackett and  doing justice to the Genesis material. Roger King’s skills in the keyboard and arranging department  adding to Rob Townsend’s subtle embellishments on all sorts of wind instruments, they perform  the material with due deference to the authenticity in a manner which could be termed contemporarily authentic.   Arguably the star of the show, aside from Hackett and of course the songs, is Nad Sylvan, who’s visibly  grown into the role as the Hackett vocalist of choice and delivering the revered Genesis material in his distinctive but respectful way.  The jury may be out on the headgear he sports in the encore but where would we be without a singer doing early Genesis material without any sort of costume?

‘The Musical Box’ has remained as a constant in the set for two years, indicative of its status and it’s a performance which is as dynamic and theatrical as it ever was. If there ever were a contender  for the highly overused rating of  ‘best underrated Genesis song’ ‘Can Utility And The Coastliners’ must surely be up there. Sung on ‘Genesis Revisited II’ by Steven Wilson, its rarity in the live setting has been worth the wait as has the Hackett band’s chance to let loose on the instrumental  section of   ‘Cinema Show’ and Roine getting his more familiar six string instrument  strapped on to deliver the solo on ‘After The Ordeal.’

The concert film captures the full set shot from the usual multi camera perspective. There’s a concerted  effort to provide prolonged  full stage views from the  back of the stalls and from the balcony  – the band aren’t  racing round the stage a la Iron Maiden requiring lightning fast editing cuts, although they do get a bit intense during the huge climax to ‘Shadow Of The Hierophant’. There’s also someone wandering round behind the backline giving occasional views into the audience and the ecstatic front rows. It comes supplemented by the inevitable  behind the scenes documentary and rehearsal  footage; from Hackett,  more often than not captured not with a guitar but mug of tea in his hand to the pre show meet and greet, fans ushered in like kids excited to see Santa, sharing their memories as Steve graciously chats and signs various ephemera.  Particularly f you’re one of the lucky ones captured on camera for posterity, or even if you were just there,  then the whole package  makes for a  worthy addition to close the most recent and celebrated  chapter of the Hackett story.

Watch ‘The Lamb Lies Down On Broadway’ from the film here:

You can find the Steve Hackett website  here:  https://www.hackettsongs.com/