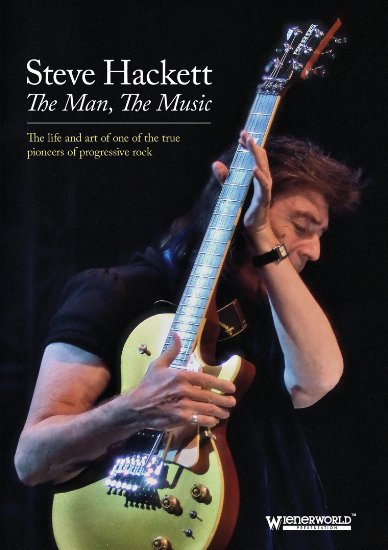 Never was it more appropriate to churn out  the time honoured  phrase “Steve Hackett – this is yer loife!” – imagine that half hour from the primetime TV staple of years gone by  expanded to two and a quarter and you have a pretty comprehensive and at times, revealing overview of the life and times of Mr Stephen Richard Hackett.

“I was born in 1950” – it literally does start at the beginning and brings the story right up to date with Steve talking about his most recent album ‘Wolflight’, the train stopping at all major stations in between and down several  rarely travelled branch lines on the way.

A project masterminded and filmed, with the occasional wobble  by Matt Groom, the documentary (or rockumentary if you will – been dying to write that) gathers snippets of live footage and clips but is, in the main, made up of interviews in a range of locations with Hackett himself and a whole host of colleagues and family.

The first surprise is to see him, on occasions, dressed in something other than his customary black – in conversation with his main sidekick, regular collaborator, producer and top keyboard man in his touring band Roger King.  There are contributions from the rest of his current touring and recording band  who all add their three’penno’rth on the Hackett magic, more often than not sat in Tammy Wynette’s very pink and sparkly Winnebago backstage in Leamington (don’t ask). Nick Beggs appears in full undertaker’s garb as was his wont a few years back, all top hat and pint of Guinness and brother John Hackett talking back over the early days of Steve’s solo career, throwing in a few nice curios about the recording of the first solo album ‘Voyage Of The Acolyte’ back in the mid seventies.

The late great Chris Squire also gets some airtime, chatting away about their recent ‘Sqackett’ collaboration over tea at the Hackett kitchen table. Clearly at home and relaxed, the access to several of the ‘to camera’ chats and guitar demos are direct from  the Hackett home and studio, making for a comfortable and informal atmosphere. A couple of times, Steve opens up quite candidly, for example, talking about his first marriage, possibly for the first time although uber fans may correct me on that. There’s also Steven Wilson seating barefooted and dressed in black in the conservatory chatting over all things prog and getting a bit closer to home, a lovely  couple of moments where Steve’s mum talks proudly of him ‘being a star’and  playing the harmonica at two the way proud mums do   – Steve looking suitably embarrassed by it as she  talks about her little boy!

Unfortunately, there are no contributions from  Genesis members yet Steve talks in very complimentary terms about his former band mates from the glory days of the seventies, of Mike Rutherford in particular and also of Gabriel’s creativity as he and Hackett tried to embellish and add their weight to  the power trio of Banks, Collins and Rutherford.  He also compliments the arranging skills of Phil Collins and reveals how it was he who pushed Tony Banks into broadening his keyboard ideas from piano and into the mellotron and beyond. One highlight is when he refers to Gabriel’s tortoise-like progress in songwriting as “endless foreplay”. Not that Genesis gets the bulk of time, in fact quite the contrary as in terms of time allocation, as Genesis don’t appear until 45 minutes in and essentially get about half an hour, which in terms of a forty year career of which Genesis played a part in 6/7 years, is a pretty fair representation.

The strength of the film comes in the coverage of the Hackett solo career and the breadth and variety which comes from the refusal to be tied and labelled with one genre – check out the demonstration of various techniques as he models on both nylon and electric guitar. Plus a slight preoccupation with harmonica (and spoons).  What the film also does is clearly redress the massive imbalance which the Genesis ‘Sum Of The Parts’ film was guilty of when looking at (or not as the case may be) Hackett’s solo career  alongside the context of his contribution to Genesis. And to boot it also goes to reinforce that Steve Hackett is one of rock music’s good guys.

Trailer for ‘Steve Hackett: The Man, The Music’:

Steve Hackett can be found  online at : www.hackettsongs.com

He is also on Facebook  and tweets as @HackettOfficial.