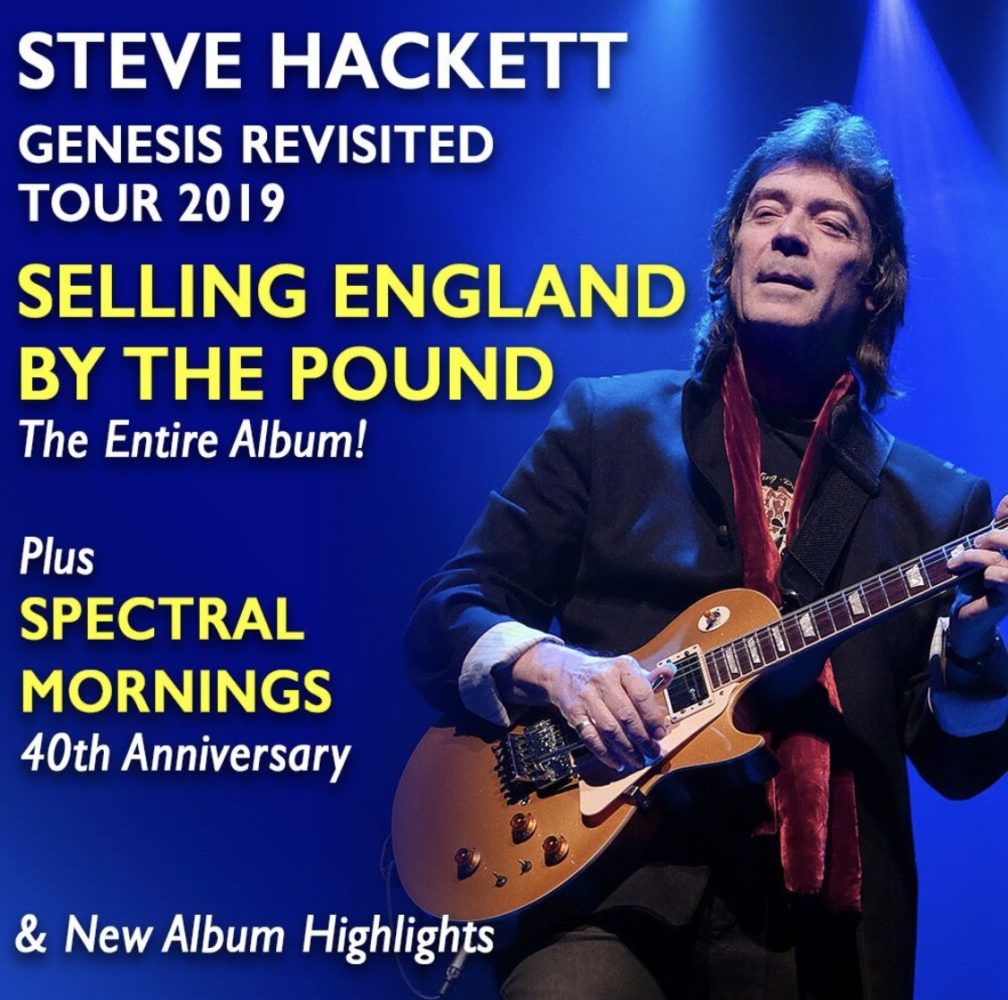 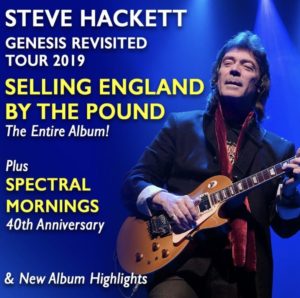 This comes after his announcement of a massive US and Canadian tour where he will be performing in its entirety for the very first time, Genesis’ groundbreaking album Selling England By The Pound. This album has been recognised as the definitive Genesis album. Hackett will also be celebrating highlights from his newest release Edge Of Light unveiled on 25 January 2019.  Accompanying Hackett on the tour are Roger King (keys), Jonas Reingold (bass), Rob Townsend (sax/flutes), with Nad Sylvan (vocals), and Craig Blundell (Steve Wilson, King Crimson, Iron Maiden) will be playing the drums.

Steve Hackett is one of those illuminating musical masters. He has enjoyed an incredible career since the 1970s having been part of one of the most innovative and compelling bands in the history of music. He is a classical guitarist and composer and has released more than 30 solo albums. In 2010 he was inducted into the Rock And Roll Hall of Fame.

In his own words Steve conveys, “I am thrilled to be performing the whole of my favorite Genesis album, Selling England By The Pound, which caught the attention of John Lennon in 1973. I felt that I was now playing guitar in the world’s best band and everything was opening up for us. Also I look forward to playing all the favorite songs from Spectral Mornings, marking its anniversary, plus new album tasters as well as additional Genesis gems in a terrific grand slam.’

I had the distinct honour of speaking intimately with Steve who was candid, brilliant and a real blast.

Louder Than War: What motivated you to do such an extensive US/Canadian tour?

It’s madness really. I love touring. There is something about taking either new music or old music and playing it in front of people and having them go nuts. I quite like it. I’m addicted to the process, and I figure it’s less harmful than heroin and it gets you high all the time.

I love that answer. Artists today can’t seem to remain relevant for 40 seconds. What is your secret to remaining relevant, you and bands like Genesis for over 40 years?

There isn’t any Genesis left at the moment. It’s the love of the early music which I still feel that it’s my time to honour. There are guys like myself; Roger Waters still goes out and does Floyd, as does Nick Mason from Floyd, but those were very different eras of that band. You have one guy and his vision of that. My vision of Genesis: I did the whole Selling England By The Pound plus one extra track that didn’t make it onto the album but we played that. I want to give people the complete thing. I don’t want to Segway a few teasers. I’d like to honour the past but I also want to make new albums. I’m recording even now. I still get a buzz out of new albums.

You have already completed over 30 albums?

Yeah, they keep coming. I love making albums. They can be infuriating at times because you don’t get all the ideas that you need chronologically – they fall into place gradually over time. Complex music is like that, rather multifaceted. Multifaceted music has got surprises.

You might have already had it but if not, if you could have your ultimate stage fantasy what would need to happen?

Ultimate stage fantasy…oh wow…well I did have quite a few fantasies. The truth is the biggest fantasy of them all is to keep playing. Each time I come back it’s different. I have a different drummer this time, Craig Blundell, Jonas Reingold on bass… if you just heard what the rhythm section alone does together…somehow the rhythm section is the engine room of the band. It can be powerful. These guys are extraordinarily gifted, they are masters.

Do you think that back in the 70s if all the technology that we have now was available, you would have done your recordings differently?

I think so. We would have used more colours, more sounds. We were using a mela-tron, and a piano – it seemed like we had a lot of sound. Now there is so much more that you could do: you have the sounds at your fingertips so then there’s that; you might have a player but you double that with a sample as well; you’ve got the man and the machine going all at once. The process of recording has changed over the years. You’re gaining precision but the band can’t quite breathe in the same way, like orchestras, the invisible conductor, “You’ve got to speed it up a bit, or slow it down.” That has to be processed if that what is you want to do. Music has become more mechanical because it’s relying on technology.

You just announced that you will be releasing a new CD Live at the Royal Festival Hall?

That was an orchestra – the Heart of England Orchestra. We had them on stage with us with the band and they were phenomenally good. I did a show in Buffalo with the Buffalo Philharmonic a couple of years back. We liked the conductor so much, he was jumping up and down and people loved him. We brought him over to conduct on this British tour, and it looks and sounds great. It kind of sweeps all over the orchestra and you can see what’s going on, it really worked. It was an extraordinary thing.

You also released an album in January, The Edge of Light.

The Edge of Light and its predecessor The Night Siren had about 20 people on each of those albums. We had so many people on it from all over the world; we had a sitar player, Sheila Marikar, and she was extraordinary – she came to my house, sat down on the floor and recorded this extraordinary set, first-take stuff. There were a lot of things like that on the album, things that came together very quickly. I was surprised. The album got done very, very quickly and it sounded so good, it sounded like it had taken years. It took a little more than a year to put that together.

The question is: If you could live one day of your life as a female would you? I’d have to say which female would that be? I guess if she was attractive enough I’d have to say OK yes, I’ll try it just this once, but don’t trap me in this body. What’s it like to look in the mirror and see yourself absolutely looking gorgeous? What’s that like? You were not expecting me to ask that?

Well good. I know my mother was very attractive in her day and even now and she says, “I wish I was born a man.” If you’re born a man you’ve got so many more advantages.

I love being a girl because I love men so much.

Just as well and even if you preferred women, that’s still an option and the main thing is that people are fulfilled whether they are hetero, gay, or bi, or asexual or whatever. The thing is to have a great time. Narcissists of course are so in love with themselves, and their main relationship is with themselves. There are people like that who physically admire themselves.

What can the fans expect from you for this tour?

I’ll tell you what they can expect…the whole of Selling England By The Pound, plus the extra Peter Gabriel track. That was the album John Lennon said we were one of the bands he’d listen to all those years ago. So I’m proud of that. I’m going to do most of Spectral Morning. We did 18 countries in seven weeks, and then we went back for more. We were gluttons for punishment. I do some tracks from Edge of Light too. I think the whole experience is about three hours – usually there’s a 20 or 15 minute break in the middle for the people that want to powder their noses. The others can do whatever they need in between. It’s a long show but it’s a very fulfilling one. All three of these are favorite albums of mine – they happen to be favorite albums for different reasons and I think this is the best show that I can do. The band are quite wonderful and it’s extremely varied music. It’s a very surprising show unless you happen to know every note of everything I’ve ever recorded. I’m very proud of it and I think that people are going to love it – I’m looking forward to doing it in the States and Canada, and I’m looking forward to doing the dates you’ve mentioned at the Beacon and the Richfield. We will also be doing Australia next year. I’m recording new stuff already but I’ll be taking the Selling England show to Australia. I’m a busy boy.

Then you will begin again with the new music.

And then I’ll be doing it all over again. It’s a great life if you don’t weaken, and I have a lot of fun doing it.

I actually believe you.

You know what I think? The longer I’m around I think that music’s job is to heal. Its healing people and building bridges between nations that are becoming fractured by politicians. There are no borders for musicians. We live out of our suitcases, we’re gypsies, that’s what we do. We show up and if we’re lucky people go nuts. We have the best job in the world.

I think you’re right. Is there anything that we haven’t talked about that you wish to mention?

I’m sure that we would have conversations way into the night. I’m working on my autobiography – it isn’t finished yet but by the time I’ve slagged off all of the industry it will be done…No I’m just kidding, I’m going to praise everyone. Particularly those I work with. I’m not going to use it as a forum to bitch about everybody, I won’t be doing that. I will be talking about the extraordinary people I work with. I’m a product of a lot of different schools of thought. I don’t feel I stand alone by any means.

There’s always room for improvement. The longer I’m around the more I get involved with other things. Right now I’m involved with healing – it’s something I was reading about and I found I had ability to do that. People have been going to concerts and saying they have got their hearing back. Recently I’ve been healing people. Again, music is healing and at the very least it can energise people – it’s an extraordinary power that music has. That’s all part of it I think.