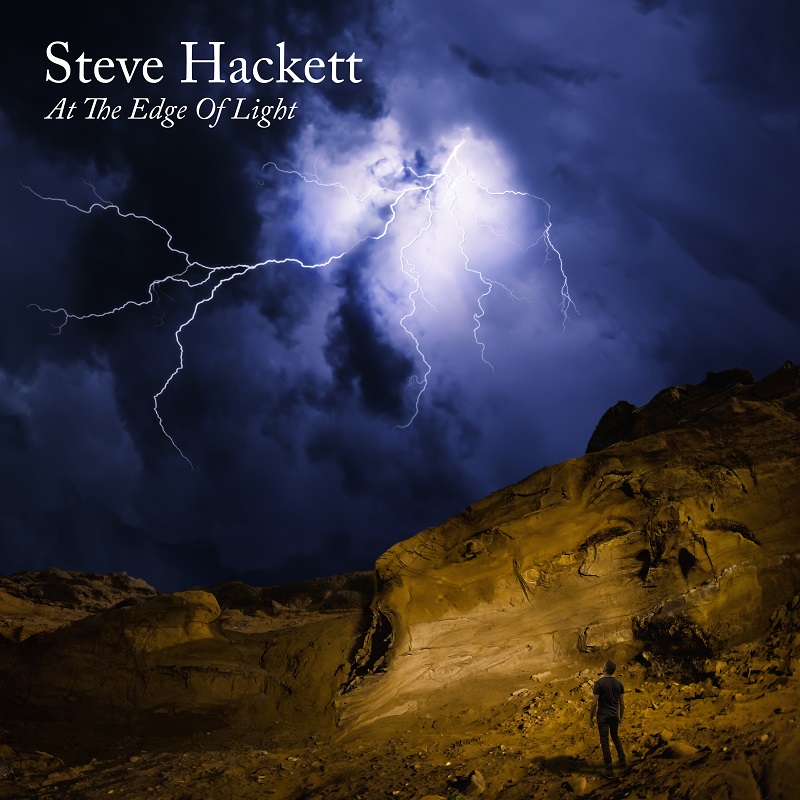 Steve Hackett: At The Edge Of Light

A late call on the new Steve Hackett (as he continues to be billed ‘ex-Genesis guitarist’ but it was over forty years ago – yawn) album which sees his more recent work coming into sharp focus.

Despite the label, Steve Hackett has never been beholden or precious about forming an attachment to any particular musical genre. In fact he delights in confounding anyone who tries to pigeonhole him regardless of the ‘ex-Genesis’ billing.  Having said that, since 2013 his live work has revolved around a very successful succession of tours based on his Genesis history. In the absence of anyone else willing to assume the mantle, he’s been the keeper of the flame and while people have lapped up the offerings and he’s responded to the demand by varying the diet with orchestras and sets that celebrate album anniversaries, his solo work has seemed to play second fiddle. And that’s despite him issuing three albums in the period with 2017’s The Night Siren and 2015’s Wolflight and now the new set At The Edge Of Light.

While the previous two albums have seen Hackett toying with world issues both lyrically and especially musically, utilising a whole host of world musicians and obscure/interesting instruments and working on arrangements that don’t follow a linear direction, At The Edge Of Light sees his visions, hinted at or not quite fully formed on Wolflight and Night Siren, most fully realised.  From a personal viewpoint having been a fan and Hacketeer for some forty summers this very year, it’s his most satisfying release in a long while.

Why’s that? Well, not to suggest he’s going backwards at all, but it seems like he’s hitting the sweet spots of yore combined with the best features of his more recent work. Meaning, you may find yourselves harking back as far as  1978’s Please Don’t Touch and the deployment of different vocalists and styles whilst admiring the vast and dramatic arrangements that have characterised his contemporary work.

The tone is set immediately as Fallen Walls And Pedestals hits with cathedral walls of sound, a monstrous beat and a sharp Hackett lead line cutting through, yet only provides a minor hint at the wildly ethnic atmosphere and groove that appears later on Shadow And Flame. Much has been made of the Descent / Conflict / Peace trilogy that closes the album but the real delights appear elsewhere as again, the non linear nature of the tracks sees the arrangements and moods shifting mid song. Some standard bright and breezy Hackett that opens Under The Eye Of The Sun soon evolves into a mid song sea of tranquillity before the main theme returns and Steve fizzes out some striking lead lines.

Hungry Years is one of those almost throwaway yet invariably catchy songs he does now and again and harks back to the sort of more accessible song based music from the Cured era. All very pleasant and not too much of a challenge maybe, then he launches into a superbly crafted  solo that shifts the goalposts. Both pieces  show his knack for coming up with a melody that proves  impossible to resist.

It’s a feature of the remarkable eleven minutes of Those Golden Wings which is built  on a chorus that defines exquisiteness – Hackett at his most musically eloquent. It relies on a certain lush quality and a brief moment that musically harks back to Please Don’t Touch’s Agatha Christie/Carry On Up The Vicarage Englishness, before a hint of the hard rock riff of the obscure b-side Hercules Unchained, oh, and a choir which reappears later at the climax of the album. Underground Railroad suggests it’s going to be one of those Hackett departures into the blues that he’s so fond of,  but a gospel tinged vocal challenges his rolling acoustic blues that eases into a guitar masterclass and another melodic hookline around the contemporary theme of “keep on moving till the shadows are gone, cross that water to the land beyond.”

And with that, his latest solo venture is set to give way to another Genesis based tour that also celebrates another landmark in forty years since his classic Spectral Mornings album. Looking backwards is great but At The Edge Of Light is a strong reminder of the power of now.

You can watch the video for Under The Eye Of The Sun from the album here:

Steve and his band are on tour now and reach the UK in November where he’ll play the full Genesis Selling England By The Pound album plus a revisit to 1979’s Spectral Mornings and hopefully some of his new work.

He’s said, “I’m thrilled to be performing the whole of my favourite Genesis album, SELLING ENGLAND BY THE POUND, which caught the attention of John Lennon in 1973. I felt that I was now playing guitar in the world’s best band, and everything was opening up for us…

Also I look forward to playing all the favourite songs from SPECTRAL MORNINGS, marking its anniversary, plus new album tasters, as well as additional Genesis gems in a terrific grand slam!”

The November 2019 UK Tour dates are as follows: 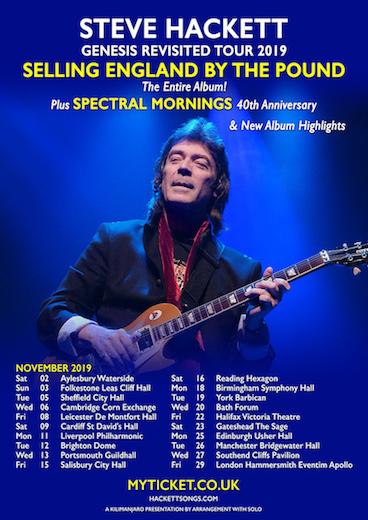