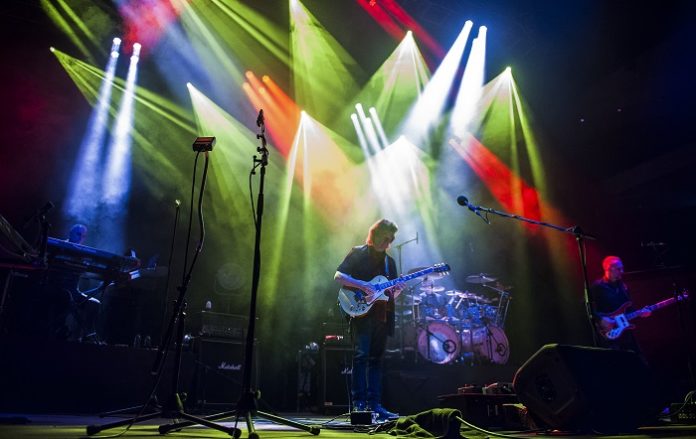 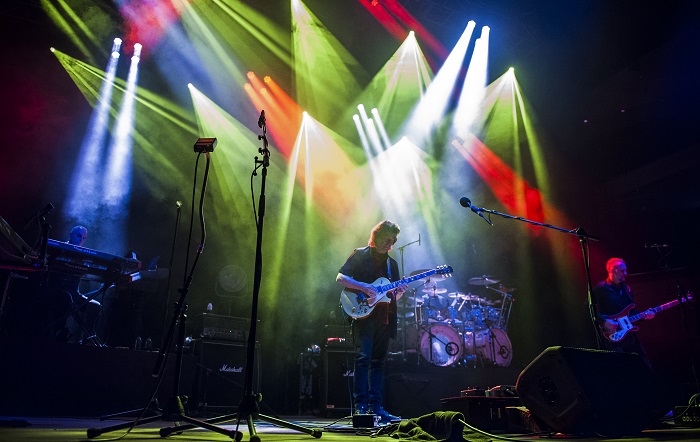 Almost a year since he was stood in front of a mighty symphony orchestra in the mighty Bridgewater Hall (our review here), he was back with his no less impressive five-piece band. This time he’s not selling tickets by the pound, or for his next round of shows in 2020/1 whatever form they might take, but indulging in another round of celebrations.

His Spectral Mornings album is, incredibly,  forty years old, and Genesis’ Selling England album…well, why not? He’s performed much of the latter over the past six or seven years, but the second half had him venturing into unmarked territory, more of which later.

Spectral, though, has always been a special album – one that cemented him as a solo artist and in particular had him declaring that the set of musicians who were on his short solo journey were a group he was “now proud to say are my band.” The current Hackett outfit isn’t too shabby either. Despite a few team changes along the way, Jonas Reingold is now in the bass box seat managing not only the four-string duties but switching between the double neck and six-string guitar while setting off bass pedals with apparent ease. Craig Blundell is the newest recruit and his drumming style, whilst appearing to be similarly at ease, is a perfect match for Hackett now long term drummer Gary O’Toole has moved on.

So our first half focused on the forty-year-old yet still fresh Spectral Mornings material with a chunk inserted from the latest At The Edge Of Light record. The latter was particularly bold and dramatic, yet to hear some rarely heard classic from ‘79 was a real treat. Every Day has been utilised as an opening gambit in the past, but preceded by the Land Of A Thousand Autumns intro music was a real throwback and the solo ranks up there with one of his best.

Partying like it was 1979, we had the rare treat of an appearance by younger brother John Hackett on flute for an exquisite, underplayed and very welcome The Virgin And The Gypsy, with Hackett donning the Zemais twelve-string and The Red Flower Of Tachai. It was a pity he didn’t stay on for Clocks and bash away at the bass pedals with his hands like he used to do back in those Spectral days. And for the icing on the cake, we even had the ‘full’ version of the landmark title track with the full intro restored, missing in action (like some of those pilots in Tigermoth) for far too many years. 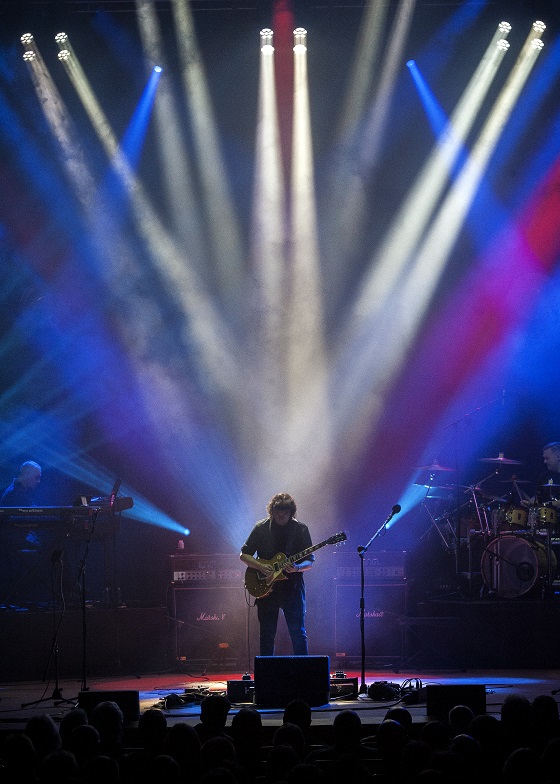 The peak of Genesis’ recorded output. Others will argue some major highs yet a few weaker moments. Nonetheless, no-one can have complaints about a full run-through; classic songs that have been part of the Hackett set for a number of years juxtaposed with outings for the likes of The Battle Of Epping Forest, where Nad Sylvan played all Gabriel’s weird and wonderful characters to a tee – even rolling his ‘r’s on the Mick The Prick line. People’s complain about the track being a battle between a wordy set of lyrics and instruments all fighting for space, but it is what it is and was a pleasure to hear.

The Cinema Show, one of Genesis’ strongest pieces, saw Hackett, Jonas Reingold (a bassist in the style of Chris Squire, Colossus-like, who makes the bass seem like a toy), and Rob Townsend all taking a seat while Roger King and Craig Blundell duelled out on the instrumental section before some bowel-rattling bass pedals. Possibly the only slack moment was the extended jam in the middle passage of I Know What I Like, Rob Townsend’s sax taking centre stage. And then there was the surprise call of Déjà Vu – a song from the era, overlooked but revived by a few who have tried. But, by Hackett’s own admission, Nad Sylvan has made it his own, sending a chill with the way he delivers the opening “I’m on my way, I’m stronger than before” line and adding  a touch of bluesy soul to More Fool Me, he’s cemented his position as the perfect vocalist for the Hackett band.

True to form, the tour is still running and we’re faced with the announcement of Steve’s next round of dates with a Seconds Out series of shows announced for November 2020. It’s bound to rival the high-quality production values of the current show but hopefully with less hazy light or smoke. By that time Hackett will have joined the ranks of the seventy-year-old rock stars. And just when we were wondering what he would do next…

All words and live photography by Mike Ainscoe. You can find more of Mike’s writing on Louder Than War at his author’s archive.