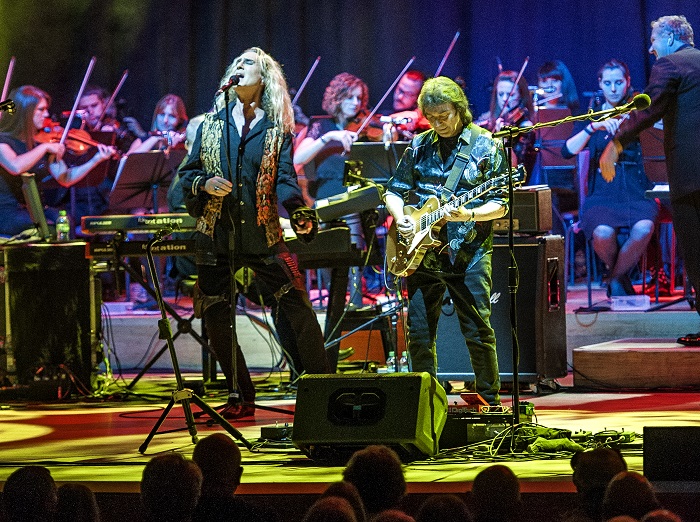 Rock music and orchestras cross paths again. Earlier this year, we were on hand to see how the orchestral Evanescence experiment translated into the impressive live Synthesis experience. Now after almost forty years of Hackett watching, our prog man Mike Ainscoe finally gets to see him backed by the Heart Of England Orchestra. Did it live up to the ‘Tour de Force’ billing?

No stranger to working in an orchestral setting, Steve Hackett’s latest venture took his ongoing series of Genesis Revisited shows on a short series of dates around the UK. For many, the once in a lifetime opportunity to see such a spectacle resulted in several sell out shows which  must be reassuring for Hackett to continue to appease the demand for what began five years ago as an interesting diversion to his solo career.

Backed by his usual band, it was  Flower King and Karmakanic man Jonas Reingold taking on the job of  the multitasking required from Hackett’s left wing man and a sterling job he did too taking on bass, double neck and guitar duties as well as upping the fashion stakes with a suitably rock and roll skull emblazoned jacket. The there was a  song selection that focussed mainly on the Genesis era  also dipped into the Hackett solo catalogue with the instrumental The Steppes and El Nino adding a dash of drama  although the pairing of Serpentine Song and Shadow Of The Hierophant broached the full spectrum. The latter in the prime pre-interval slot could be viewed as a repetition of a simple riff yet built and built to a grand brass fuelled climax. Only thing missing was Nick Beggs sat cross legged and bashing his fists against the bass pedals. Serpentine Song was perhaps the unexpected highlight of the show – a tribute to the late dad Hackett, it was apt that John should add his own distinctive flute to a delicate number whose harmonies and intricate playing might have it branded as a lighter piece in the overall scheme of things but balanced the set perfectly. 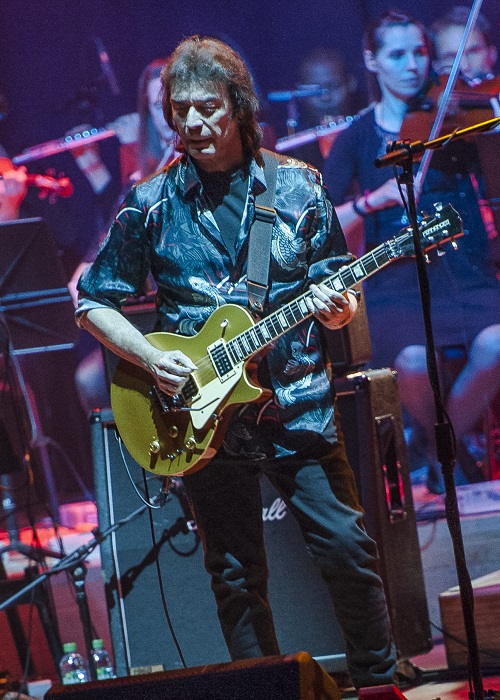 No major surprises, but talking of drama, Dance On A Volcano was back in the opening slot; red and yellow lighting adding a tension and spectacle to the impact of the outfit arriving onstage. Of course many were in a state of unadulterated bliss for the return of Supper’s Ready for the first time since the first round of ‘Genesis’ shows. The most famous of Genesis’ (and most prog rock’s) extended pieces, it saw Nad Sylvan delivering the ‘666’ lines decked out in a set of steam punk goggles as a variation on his previous costumes. If you need to ever know what a climax is, simply dig out Hackett’s version of Supper’s Ready for a definitive definition.

Now it might have been that  the different areas around the venue had differing experiences of the impact of the 35 piece orchestral parts and what difference they made to an already full band sound – added to at points by brother John Hackett’s flute and extra vocals and guitar from Amanda Lehmann. Some people questioning what was added from the normal band who are more than capable of cranking things up, while there were various times when you may have expected things to really swell, but were underwhelmed. ‘Underused’ was one term heard bandied about on the exits. We’re probably being picky and we should be grateful for there still being the opportunity to attend events like this as just a decade ago, you might have caught Hackett playing Manchester Academy 3 or the basement  of the Blackburn King George’s Hall so the investment  into the production, the likes of which a few years ago we thought we might not see again, is more than welcome.

With the well timed announcement of more Genesis Revisited/Extended shows in the UK for November 2019, with the classic Selling England By The Pound being readied for a full run through, fans will have been snapping up tickets in the excitement of the post gig aftermath.With the taster of Dancing With The Moonlit Knight and Firth Of Fifth, the promise of some new music and also the 40th anniversary of Spectral Mornings, the Hackett rounds of revisiting seem to be set with a fair wind.

You can find the Steve Hackett website  here:  https://www.hackettsongs.com/