“Maybe if we live long enough, we grow into what we always wanted to be. Just maybe, if we stick at what we love, it’ll come around and come good. Steve Ellis has earned the right to sing the Blues if he wants. And sing it he does!”
Paul Weller

Steve Ellis is the quintessential rock & soul artist. As lead singer with the 1960’s chart-topping Mod-Soul outfit Love Affair, Steve’s vocals had the kind of powerhouse range that made you sit up and notice. He was one third of the holy trinity of ‘Steve’s’- the other two being Marriott and Winwood – who emerged out of the mid-1960s UK rhythm & blues scene and became three of the best blue-eyed soul vocalists of the entire decade. All three were a different class, singers who could take a good song and totally own it with a single burst of lung power. And there’s no better example than Love Affair’s Everlasting Love which went to number one in February 1968 and in 2018 celebrates its 50th birthday.

50 years further down the line and Steve Ellis releases a new album ‘Boom Bang Twang!’ on April 20, 2018. An expertly crafted mix of new songs and some heartfelt covers with guests and long-time friends Paul Weller, COW, Manfred Mann’s Mike D’Abo, Kev Wallbank, Andy Crofts and Ben Gordelier (The Moons) all along for the ride, Boom Bang Twang! is the work of a man who believes in not resting on his laurels. He is always looking to record something new. When the decision was made to record what has become this very album, in stepped Steve’s long-time friend, Paul Weller who suggested it be done at his studio. Aside from a couple of songs from outside contributors, the album was recorded with a core group of musicians, drawn from the ranks of Paul’s band, The Moons, COW and The Dream Foundry. These musicians, under the direction of Steve and Paul, worked up individual parts and arrangements and, after a few run throughs, recorded them, playing as a group, so as to capture the immediacy of a band playing live in a room. Backing vocals and any additional overdubs were added, where necessary, but the album has the air of a band playing songs for you, rather than it being a collection of deft studio techniques that would somehow disjoint the effect of the performances.

Boom Bang Twang! shifts effortless through soul, rock, pop, reggae and blues with all the quality one would hope for from an artist who’s been there, seen it, done it, and still has the t-shirt. The first single Lonely No More, co-written with Paul Weller, is a glorious Northern Soul-esque shaker absolutely primed for radio. Soul Trek is another stand-out. Utilising an exquisite John Schroeder (RIP) string arrangement, Steve delivers an outright corker of a song. Forever (written by COW) is a real sweet, catchy love song; Forgot To Be Your Lover a truthful and respectful cover of the William Bell classic, whilst Gerry Marsden’s Don’t Let The Sun Catch You Crying runs deep, soul deep. Cry Me A River (again with Paul Weller) is a nitty gritty rhythm & blues stomper, Jimmy Cliff’s Sitting In Limbo gets the Steve Ellis makeover as does Tim Hardin’s Black Sheep Boy, whilst album closer Oh Death, sees Steve explore psychedelic blues to dramatic effect tackling the subject manner with layers of malevolent backwards guitar.

The Steve Ellis story is one of triumph, tragedy and resurrection. In 1966 as a15 year old, Steve got his first professional gig singing in a group called the Soul Survivors, a tidy 5 piece who were drawn to the sounds of the great US labels Stax and Sue Records. After the band’s first release on Decca Records, they moved on to the CBS label and became one of the most successful British pop acts of the late 1960s under their new name Love Affair, scoring a string of chart busting singles in 1968 including Everlasting Love, Rainbow Valley, Bringing Back The Good Times, One Road and A Day Without Love. With their sharp Mod looks and a host of national TV appearances behind them, the band soon found themselves enjoying the kind of exposure that was being afforded to the likes of the Beatles and Rolling Stones.

Then in autumn 1969, Steve Ellis walked out of Love Affair to re-think his musical direction. CBS retained him as a solo artist and his future appeared decidedly rosy. Steve seemed to have the world at his feet, but it didn’t work out that way

After signing a management deal with Chas Chandler, Steve released a couple of singles (Take Your Love & Hold On) and also contributed to Peter Bardens’ The Answer (1970) album, which featured Fleetwood Mac supremo Peter Green. At the same time Steve recorded an exceptional, killer lounge funk soundtrack with Keith Mansfield – Loot based on a play by Joe Orton.

From here, Steve’s next project was to form a new group called Ellis which featured the maverick keyboardist Zoot Money. Their debut album Riding On The Crest Of A Slump (1972) was produced by Roger Daltrey and featured Maggie Bell, Mike Patto and Family’s Roger Chapman. Despite some excellent tracks including the classic El Doomo), it did not reach the commercial heights everyone had hoped for, so a second Ellis album followed a year later – Why Not? (1973) produced by Mike Vernon. Although the band toured the UK & Europe, they were not given the major push other CBS signed artists were afforded and the record soon sank commercially.

Steve’s next venture was to join former Spooky Tooth guitarist Luther Grosvenor, Hawkwind guitarist Huw Lloyd-Langton, Chicken Shack’s Bob Daisley and drummer Paul Nicholls to form a new rock band by the name of Widowmaker. Despite being signed to Don Arden’s Jet label and playing tour dates with The Who, Nazareth and ELO, Steve Ellis only lasted one album becoming disillusioned with the mechanics within the group. Despite a succession of different bands and deals, Steve never again tasted chart success – undeservedly so given the quality of his recorded output post Love Affair.

Following his departure from Widowmaker, Ellis took a sabbatical from both touring and recording after a new solo album ‘Last Angry Man’ was shelved due to the producers going into litigation with each other. This led to Steve taking up work as a Docker in order to get “match fit” and to rethink his next musical step. 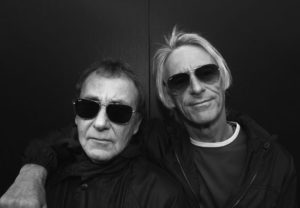 Tragedy then struck when, on his very last day at Shoreham Docks, Steve suffered a most horrific accident or as he calls it “an altercation with some two-tonne forklift blades.” An incredibly brave, 8-year fight to regain his mobility ensued and led him back to music in the early 90s.

For the best part of the next 10 years, he toured as Steve Ellis’ Love Affair and once again found himself being cited as a Mod hero to a new generation of fans whilst retaining the support and respect of his own musical peers. One such occasion was the 2001 Steve Marriott Memorial Concert (held at the Astoria), a much-revered show which saw Steve perform alongside Noel Gallagher, Paul Weller, Peter Frampton and Small Faces’ Ian McLagan and Kenney Jones. In 2004, It was somewhat fitting to see Steve joining Pete Townshend, Ronnie Wood and Slim Chance on stage for the unforgettable Ronnie Lane tribute show at the Royal Albert Hall.

The past few years has seen Steve release two acclaimed solo albums Best Of Days & Ten Commitments, as well as touring regularly and generally applying himself at what he does best – singing and performing from the heart with that tremendous (and most definitely intact) voice of his. Now back with the label where it all happened originally and with a fine new album to unveil, Steve Ellis has come full circle. The boy’s done well.

A final word from Paul Weller:

“I think back to seeing Steve on Top Of The Pops (I was 10 at the time, it’s true I tell you!), him as a little kid with a big voice, to all these years later when the same little fella is still singing (with a big voice).”

6. Forgot To Be Your Lover

You can find Steve’s music via his official website. The album is available to pre order here