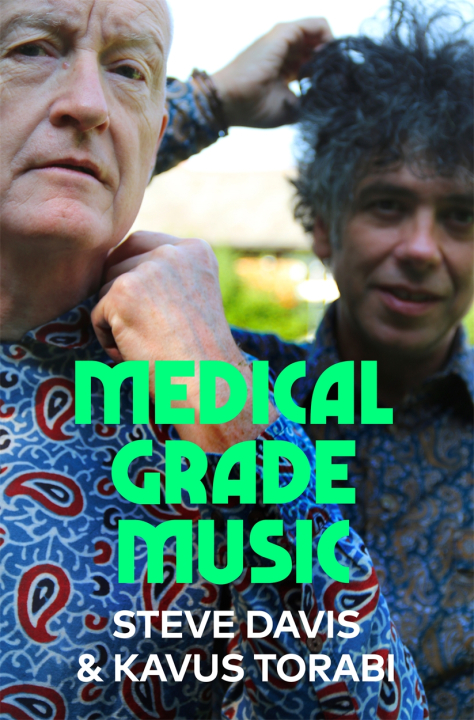 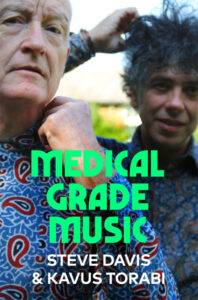 The story of one of alternative music’s oddest of couples is chronicled in this wonderful double autobiography. It’s also a great primer on music that falls outside of the Great Punk Rock War narrative and reveals a golden musical seam among the greatcoats, gloom and grease of the early 1970s. Something Steve Davis stumbles upon by dint of being born at the right time, while his erstwhile colleague spends the early 90’s chasing the same vision by skirting the more outré borders and meagre pickings of the early Britpop era with only industrial quantities of LSD to help him see in the dark.

What makes the book work as well as it does are the distinctive voices of both of the protagonists. Davis writes as a working class savant, in one sense inarticulate, or at least unconfident with his own writing, but someone with an uncanny ability to almost effortlessly pick up skills, influences and connections between the people and things that surround him. In an egoless way, he seems to excel at everything he turns his hand to and doesn’t find this in any way remarkable. Dominating snooker for over a decade, building modular synthesisers, promoting legendary Kobaïan band Magma’s comeback tour, becoming one of the most innovative and eclectic DJ’s on the scene; all in a days work. His fame was born of the Thatcher era and all of his successes seem to bear out her philosophy, it just takes a little inspiration and effort and you can be who and what you want to be. In Steve Davis land it seems this is still true, no matter how abstract and avant-garde your aspirations.

While Davis seems enmeshed in British culture to the point of camouflage, Kavus Torabi is a born outsider. The son of a Persian doctor and nurse, and born in Tehran, he seems estranged and adrift from the world around him during his first years in the UK until a mystical vision of The Stray Cats (“arch, deliberate and correct”) on Top Of The Pops in 1980 sent him on a lifelong quest for freak perfection, that psychedelic sweet spot, the endless Now. This of course would lead him away from the well-meaning but conventional ambitions of his parents to find obscurity in a succession of ill-fated, if musically adventurous bands until a haphazard blend of accident and acid drove him into the loving, if somewhat stingy, arms of his late heroes Dr Tim Smith of Cardiacs and Daevid Allen of Gong, and eventually into the orbit of Mr Interesting himself.

Whereas Davis seems, at least initially, a little stilted in his recollections, Kavus has a charming and scattershot knack with a narrative which drives his tale along at a belting pace, and a special talent for describing his formative influences: has there ever been a better description of a typical Iron maiden lyric than: “Steve Harris’ eagerness to cram in lists of historical facts meant his lyrics scanned in an awkward way, giving the songs a three legged feel. When not documenting specific wars, or war in general, they usually took their title from a book, or more often than not a film, heavy handedly retelling the story while repeating the title over and over in lieu of a proper chorus”

While Kavus’ musical journey lurches wide-eyed from epiphany to epiphany, from Maiden to Voivod and eventually to Cardiacs “being shown a film of every dream in glorious technicolour… it was all things. It was life itself” Davis’ strength is in the incredible and, let’s face it, utterly surprising breadth and depth of the music that he immerses himself in from an early age, without seemingly thinking too deeply about it (or anything!) at all.

From the outer edges of progressive rock in his youth, following the likes of Gentle Giant and Magma, and on into the realms of experimental modern composition, free jazz, developing a daedal insight into the relationships between all of the main protagonists of serious modern music over the last fifty years or so. Davis’ contributions to the book touch on so many transcendent obscurities, dropped in in such a naturalistic and uncontrived way, that you get a feel for the unbound and borderless ethos that informed the best of the early 70’s era and beyond.

Here, as in his DJ sets, there are no categorisations of taste and type, just whatever fits and has meaning in context, like where he describes dropping Charles Hayward’s (of post-prog outfit This Heat) “Speculative Fiction” into a dance tent set at the right point, somehow avoiding incongruity, and getting everyone bouncing along with the rest of it. When I saw him doing a solo DJ set, at one point he was playing bursts of Philip Glass over an angular techno track, not even roughly in time, simply because, from the vaguely engaged look on his face, he enjoyed really the obtuse noise it made. There is no better approach to music than that.

Kavus’ grand lysergic musical odyssey, or at least the first act of it, starts in triumph, joining two of his favourite bands and ends with the illness and death of his mentors Smith and Allen in a relatively short space of time, both in quite protracted and awful circumstances. You can feel the pain in the writing at that point, especially with Tim Smith, who he helped care for after a series of heart attacks and strokes left him paralysed, pain but still awe, describing him beautifully as “A magician who enchanted me into his orbit from 200 miles away, who gifted me the adventure of a lifetime”

His redemption comes, to a large extent, through his friendship with Davis, who he met at a Magma concert in 2006 (via his more extrovert wife!) and with whom he has forged a superficially strange, but incredibly loving and creative rapport ever since. Likewise, Torabi opened up a world to the snooker player that he’d only previously observed as an outsider and invited him to participate in it. As Kavus struggled with Tim Smith’s illness and Davis with what he was going to do following the death of his father – whose approval seems to have been his professional motivation – and as his proficiency on the baize declined, they supported each other and scoped new vistas for the future.

From here on in, the book becomes more of a conversation and a collaboration, the chronicle of more recent adventures and misadventures undertaken as latter day Freak Brothers, from their Interesting Alternative radio programme for Phoenix FM (“Zeuhl, Rock In Opposition, Avant-Progressive and all stops to the dark side!”), to their joint DJing sets at Bloc, Glastonbury and other festivals, to their arc de triumph, their band The Utopia Strong with Mike York of Coil. Once again, Davis just “has a go” and comes up trumps, quickly learning to build and play modular synthesizers and creating a series of completely improvised albums and live performances of twisted yet accessible instrumental music. Onward!

Theirs is one of the great unlikely bromances, and their enthusiasm for the music that they champion, as fans, curators and creators fizz off the page with the kind of dilated, white knuckle spirit of adventure that created it in the first place. This is a trip into a parallel musical universe and a great primer in the kind of ambitious music that the more conservative punk/pop/rock narratives tend to dismiss. More than this though, it’s a roadmap on how to follow your dreams (and trips) to their illogical conclusions and a paean to friendship, and a rollicking read.