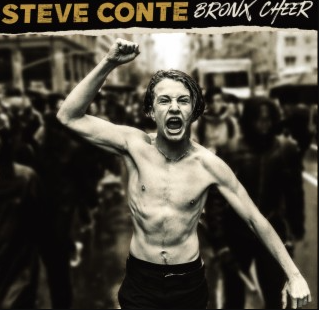 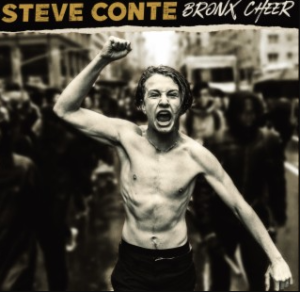 Steve Conte showcases his own considerable songwriting talents through his new solo album, Bronx Cheer, his first in five years. Ian Corbridge checks it out for Louder Than War and not only confirms it was worth the wait, but reckons it could prove to be a defining statement in an already distinguished musical journey.

Growing up in a musical family will always provide a strong springboard to any aspiring musician and this has certainly been the case for Steve Conte, who started to follow his dream, alongside his brother John, from a very early age. The experiences of his mother Rosemary Conte, a jazz singer in her own right, based within New Jersey, will no doubt have helped. But, of course, no musical career will go anywhere without a considerable amount of talent and that is something Steve has certainly been blessed with.

Steve Conte now carries with him an immense rock ’n’ roll pedigree which, over more recent years, has included six years playing with the reformed New York Dolls and eleven years playing with the Michael Monroe band, right up to the present day. And not just playing and performing, but also providing a significant input into writing some of the great rock ’n’ roll anthems of recent times, especially within the Michael Monroe band…just check out Ballad Of The Lower East Side.

But delve back into the archives a little and you will also find a music catalogue of the highest quality in terms of his great song writing, skilful guitar playing and the depth of his vocal delivery. Aside from his early career, working alongside the likes of Etta James, James Cotton, Carole King and Peter Wolf (J. Geils Band), his own bands have included Company Of Wolves, Crown Jewels (with brother John) and Crazy Truth. Through this, Steve has always kept the rock ’n’ roll candle burning very brightly. We should also not forget Steve’s collaborations with Japanese composer and artist, Yoko Kanno on the soundtracks to several hit anime series. So with all this behind him, any new release from Steve Conte always comes with a great sense of anticipation.

On the evidence of Bronx Cheer, that anticipation has been fully realised in quite a considerable way. With Steve on vocals and guitar, the nucleus of the band comprises brother John on bass and Charley Drayton on drums. There are also notable guest appearances by the likes of Clem Burke, Andy Rourke, and Jesse Malin.

The album title is a colloquial name for a raspberry, which Steve explains is “sticking out your tongue and blowing air to make a fart sound.” And coupled with the cover shot, this conveys a very direct message to a certain recently outgoing US President.

Right from the off, The Human Animal sets the pace for this rock ’n’ roll album with its clattering drums and fuzzed-up guitar, with an accompanying vocal style which has more than a hint of Steve Harley about it. Liar Like You follows as a short and blistering Ramones-style punk romp, with Charley maintaining a furious pace on the drums.

Recovery Doll has more of a 60s vibe to it, with backing vocals which have a nod back to the doo-wop era and some great guitar work from Steve. It’s an infectious fast-paced tale of excess that traces a descent from fun times to darker spaces. And if, by now, your foot isn’t tapping in overdrive, then you really should see a doctor. Three songs in and this is already shaping up to be a classic album.

Wildwood Moon ventures into more mellow and soulful territory, as Steve once again demonstrates the versatility in his vocal style, not to mention his musicianship. Flying has more of a heartfelt vibe as it focuses on how, in the face of adversity and trauma, a person of strong will can keep pushing for their dreams. It turns out that this is an old song which has been taken off the shelf, dusted down, completely re-energised and now turned into a stone-cold classic, infused with great melodies throughout. Absolute class, this.

Dog Days Of Summer serves well as an ode to the bitter end of a warm season with a slightly mellower feel, whilst Overnight Smash is more of a straight-up rocker, focusing on professional jealousy by those who don’t make the cut in the music business. Those Sexy Lies runs with a swing and a swagger befitting an artist at the top of their game and that is certainly the case for Steve Conte right now.

Guilty is a heartfelt and unapologetic love song of epic proportions, which again showcases the depth, warmth and sincerity in both Steve’s vocals and songwriting. My Degeneration brings us more fuzzed-up guitars and extended solos, whilst album closer, Gimme Gimme Rockaway is the one song off the album that was released prior to 2021, having found success with the Coolest Song In The World status on Little Steven’s Underground Garage in 2017.

Bronx Cheer simply oozes cool and is an album full of attitude, energy and above all else, a 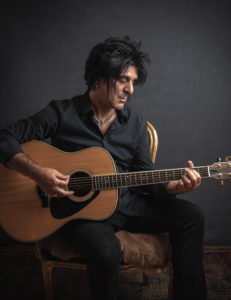 real heart and soul, deep from within the bowels of New York’s rich musical heritage. This really is a magnificent collection of songs, full of great melodies and fuzzed-up guitars, ranging from hard edged rock ’n’ roll to a heartfelt and soulful beauty, which prompt you to stand back and almost re-evaluate life itself. And within his ever-expanding musical horizons, this really does showcase Steve’s considerable vocal talents within the world of rock ’n’ roll.

Even recognising the quality of all that has gone before in Steve Conte’s musical career, this album is a defining moment in that journey, which will stand the test of time and provide a strong reference point for any rock ’n’ roll songwriters and performers in the future. I really do hope that Steve finds the opportunity to take this album on the road amidst his other extensive responsibilities, which currently include recording the next Michael Monroe band album.

You can buy Bronx Cheer here or pre-save it here.