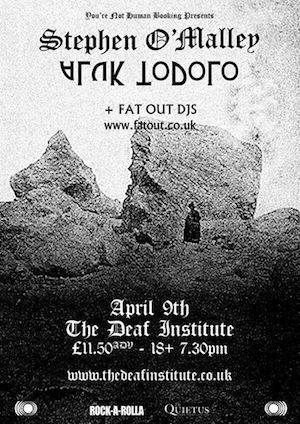 The genius that is Stephen O’Malley (of Sunn O))) fame) brought his towering, experimental live drone doom experience to Manchester yesterday as part of a UK tour with French trio ALUK TODOLO. For Louder Than War Dom Walsh was in attendance and his review of said boundary pushing “definitive maverick” is below.

The Deaf Institute in Manchester is an intriguing venue to watch bands. It’s grand in its decor and the atmosphere is always lively, no matter what kind of scene is being entertained in the main concert hall. On this particular night it was the prolific and genre spanning Stephen O’Malley, and Aluk Todolo.

Upon entry to the Deaf Institute, Fat Out DJs were spinning a range of electronica ranging from Autechre sounding, drone induced dance tunes to more upbeat Latin infused beats to jazz. All genres sampled sought to whet the palette for French trio, Aluk Todolo.

Taking the stage behind a solitary light that shimmered with the guitar tones, Aluk Todolo showed nuances of many styles and genres. From the get go and throughout there was a Krautrock influenced, rabid bass that settled into a lengthy grooves with the guitar providing the bleak colour in a range of tones. The guitar sound was discordant and harsh with a plethora of sullenly strummed chords and notes. At different points in the set, the band appeared to be playing their respected parts intentionally in a cracked formation before coming together again for a really tight blast of cacophonic, post-rock influenced glory. There were also flashes of jazz style drumming, with panache in the way the sticks seemed to bounce of the skins and the cymbals. The pace fleeted between several tempos as the guitar got more and more intense as the pace quickened. After a solid forty five minutes or so set, the single light went out and the bands success was echoed in the response they garnered from the crowd.

As the changeover happened, there were more interesting musical choices over the PA as the drum kit was dismantled to leave a wall of towering amps that would act as mini screens for the show.   Just one glance through the merchandise that O’Malley has on offer shows the breadth of his work; many pieces of his work were available on wax (with the CD version of latest Sunn O))) release; Terrestrials w/Ulver).

With the back catalogue in mind, and a reputation for anatomy shaking volume, O’Malley began an hour long expedition of dark terrain through tone, texture and any other effect his guitar could produce. The projections on amps were almost indecipherable in many sections, but looked what seemed like rain drops could have been misconstrued as the amps melting! As the dark imagery subsided, wavy lines emerged that were being contorted and dragged in the many directions that the rib shaking, monotone sound was going.   There was little interaction from O’Malley although after a good portion of the set, he raised his glass to crowd; the crowd responded in a silent union by reciprocating the gesture.

As O’Malley visited his mammoth set of amplification to tweak his levels on several occasions, the sound rarely deviated from the same chord; it was the sounds that were the offshoot of the chord that formed the frayed and tense sound which helped propel the single fifty minutes plus piece.

The sound was certainly challenging and daring in that it was a trip into the unknown. Although O’Malley was obviously in control, the thought of that unknown variable helped keep the music interesting and completely mesmerising. The constant images helped blur the lines between art and music; the two go hand in hand but you weren’t sure whether this was a gig or an exhibition.

Pulsating, trippy, mysteriously transcendent and arty, only touches the tip of ways to describe such a sonic experience. As the piece drew to a close and the visuals subsided, the stage was lit only by the red tint off O’Malley’s amp lights. An eventual, dull red projection signalled the end of the piece as the drone disintegrated. A solitary “thank you” from the stage was met with great applause and respect.

Stephen O’Malley is a definite maverick. His want to push the boundaries of sound and scope are unparalleled. With a new Sunn O))) album in the offing and more solo dates planned; one of the hardest working men in music is proving just how much of a genius he is.

Remaining dates on the tour:

All words by Dom Walsh. More articles by Dom on Louder Than War can be found on his author profile.