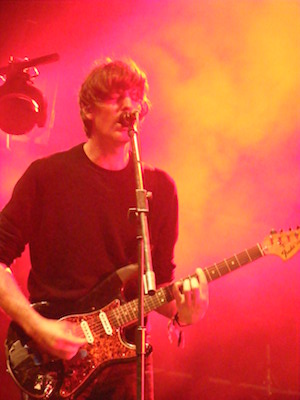 Ex-Pavement Lead Singer / Guitarist Stephen Malkmus has just released his 6th album with The Jicks and Willow Colios went to check them out live at The Kentish Town Forum.

“Sorry we don’t usually talk amongst ourselves on stage, we must be nervous or something.” – Stephen Malkmus appears to be joking but he may have a point. There is something a little subdued here, as if the band needs to feed off the crowd a bit more but the crowd just can’t quite give enough.

It’s not that new LP Wig Out At Jagbags isn’t loaded with some summery pop hits to liven up a dank London January. It has some crackers including tonight’s opener Lariat, an ode to the music of the 1970’s  or ‘The Best Decade Ever’ as Malkmus has it. If that sounds a bit like a One Direction theme, in a recent Billboard interview he explains he was looking for a Taylor Swift / Katie Perry approach.

Instead of riding a wave of communal energy that hasn’t quite arrived, it’s time to crank up the amps and wig out. There’s no harm in wigging out either; it’s what Malkmus does best. There’s more range and depth to the songs on the new record than it’s predecessor Mirror Traffic, with some brass sections on it too (sadly missing from the live show) and we get pretty much the whole record tonight plus a smaterring of older tracks in between, with (Do Not Feed The) Oyster from 2nd LP Pig Lib and Baby C’mon from Face The Truth, not the finest track from almost certainly his finest solo LP.

The real surprise though is Pavement B-Side Harness Your Hopes which is a real treat, Joanna Bolm announcing “thanks that was a Green Day cover” at it’s conclusion. The crowd, apart from a few pockets seem unmoved but it sounds fresh and exciting and reminds us of some of Malkmus’ best lyrics. His cryptic wordplay gets better with time and has given both the Pavement and Solo/Jicks LPs a real longevity. They need repeat listens to reveal all their secrets. Lyrics that seem facile on first listen become clearer and yet richer and more complex months or years later on re-hearing them.

Although tonight with new tracks like the brilliant, Pixies aping, Shibboleth and  Planetary Motion on which the band threaten to break into Cream’s I Feel Free, there still isn’t a critical mass of the band rocking out combined with audience freak out. There’s probably an equation with those to factors are divided by the size of the room so for tonight we will blame the venue. When Stephen Malkmus and The Jicks first started touring in 2001 they quickly graduated from warm up shows at  The Highbury Garage to the larger capacities of ULU and Shepherds Bush Empire and this is where they have stayed for gigs in the big smoke. It’s good that he’s still so popular but some of the atmosphere is undoubtedly lost.

The encore is a bit lacklustre and after an aborted new song they finish on a single released some thirteen years ago, Jenny and The Ess Dog. It is a fan favourite and not a bad closer but now the Jicks are on to album six, one more than Pavement recorded, there’s the inevitability that one of the 50 or so omitted tracks will be your favourite, even if we’ve been teased with a little taste of each record. (Note: No More Shoes from Face The Truth is the best thing SM Jicks have ever done. It’s their Marquee Moon. If you disagree go away and listen to it again.)

For all my whining I admit the new tracks all sound great and the Jicks still have great inter-band chemistry, with dry humour between Stephen Malkmus and Bassist Joanna Bolm and Guitarist Mike Clark looking excited throughout, getting into every song and even jumping off amplifiers.

The guitar playing from Malkmus himself is also as loose and joyous as ever. So let’s end this ‘Slacker’ label bullshit right now. Stephen Malkmus is one of the great guitarists and (non) singers without question – like Lou Reed with Richard Thompson’s chops. He’s listened to all the music from the best decade(s) ever and made it his own. Through Pavement and now with The Jicks he has morphed and funneled the sound of great bands such as The Groundhogs, Fairport Convention, Television and others into a style combined with a wit that is both literate and knowing. Consistently cool and even occasionally political (See Pencil Rot), Malkmus never takes himself or the songs too seriously either. That’s what makes his records and live shows a consistently surprising and rewarding thing. Long may he run.

Stephen Malkmus & The Jicks EU and US tour continues. You can see the dates and get new LP Wig Out At Jagbags via the Domino Record Co Website.