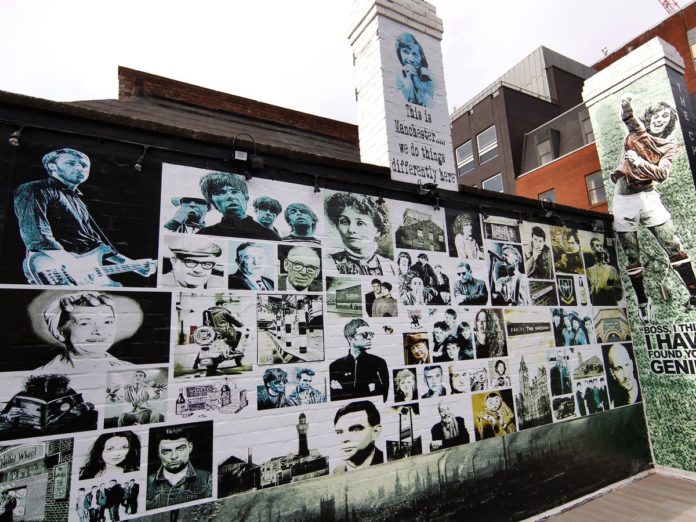 I actually got an invite to this by accident after chatting to Georgina Robinson (ex Factory Records employee and Manc PR dudester) about something totally different and the conversation got to Stephen Lynn. I didn’t realise this was the guy behind the amazing Old Nags Head mural on Bootle Street. (above)

For those who don’t know Stephen Lynn let me put you in the picture (you get me…). He’s an artist from Warrington who now resides in Manchester and his art just blows you away. After getting the nod from Rowetta of Happy Mondays fame he was commissioned by The Old Nags Head to create the massive mural on the rooftop beer garden which everyone talks about around here. It took him months to stencil out all the pictures (as above) and then they were burned into the brickwork to create an iconic scene of familiar Manc faces from all different generations, which includes the famous Tony Wilson quote, Emmeline Pankhurst, Alan Turing, fuckin’ Hilda Ogden and a plethora of music greats, too many to name.

This exhibition at the old Factory records headquarters is a celebration of some of his latest drawings, including some ordinary people he just liked to portray and a few familiar faces from the Manc scene and more. 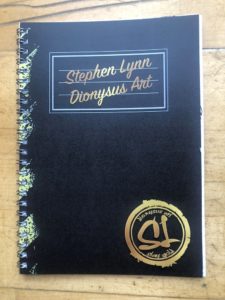 It’s all about his new book Dionysis art which is a tidy little thing that looks like a notebook but contains some great images and quotes to match the artwork. And to top it all off we get a classic old skool DJ set from Hacienda legend John Da Silva and a short set of Twisted Wheel hits from Jonny Brown to celebrate this release.

Jonny does a short set of Twisted Wheel classics and has the crowd singing along to every tune he airs. He’s still got that magic and it’s great to see in back on form with some great stuff. Strife is just fuckin’ brilliance and the lucky people here are chanting every word back to him. He still has that indie rock star look and belts out his stuff with a confident air like he’s never been away. A wonderful You Stole The Sun lifts the mood and you know they’re gonna blow up The Ritz when they return later this year. The picture of Jonny in Stephen’s book is a play on The Matrix and looks great with Stephen’s signature style.

I won’t give too much away as this is a book you should own if you love his work. They all have a photographic look to them which make them stand out with style. The fact that he’s included some unfamiliar faces along with some outright legends shows he’s a man with a heart for his art and keeps his feet firmly planted in his working class roots with no pretence. A big thanks must go out to Georgina Robinson for getting involved and securing the old Factory offices for this great display of artwork. I could picture Tony sitting at that legendary table in the centre of the room swearing like a trooper at Shaun Ryder and all the other nutjob musicians who graced this place. Sends a shiver up me spine….

Photo credits: Karen Mcbride. Use of these images in any form without permission is illegal.