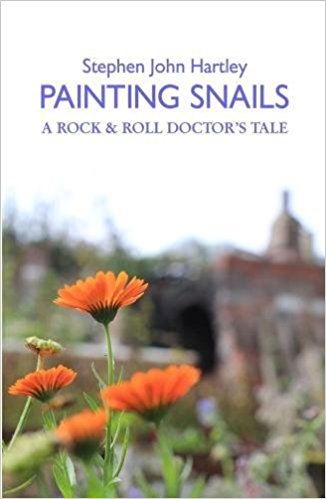 Stephen John Hartley maybe best known to Louder Than War readers as guitarist in the seminal Burnley Punk band Notsensibles, however, this book is far from a conventional memoir. Instead, it offers a stream of thoughts, which loosely hang together in an autobiographical sense, and combine to reveal a life that is certainly less-ordinary, all delivered in a “no-nonsense narrative” that offers the sense of a conversation with the reader. A conversation that takes place in a specific spot – Hartley’s allotment, overlooking the town of Burnley.

However, the allotment is not just a setting for the tales that Hartley delivers, it is a central theme and drive this fascinating narrative. As Hartley writes,” The Ranch is part of a way of life – it represents a little piece of freedom” later going further and describing it as what keeps him sane and enables him to continue working to support his family.

Having begun working life as an apprentice engineer, Hartley develops a life-long love of making and fixing things. Guitar amps, cars, various parts of the allotment and even some type-setting and woodblock printing testify to the skill of this Northern Renaissance Man.

Music is a central theme to the book and Hartley chronicles the development of Notsensibles in a matter of fact manner. Whilst a fan of the Punk movement, Hartley is less enamoured of the Sex Pistols, Clash etc. as they were, in his view, packaged by record companies and the real deal was the bands who followed.

What elevates this book to the level of unmissable however is a chapter entitled ‘Emergency’. Setting the scene on a beautiful spring day, we are suddenly plunged into Hartley and his team in the Accident and Emergency Ward dealing with a 47-year-old man in cardiac arrest. It is utterly gripping and is graphic evidence of why this book is so special.

Hartley, with no A Levels and no obvious route into the profession, decides after becoming a father that he wants to study medicine. That is a lot easier said than done and years of hardship and challenge follow before he manages to qualify. Hartley manages to convey what everyone who knows someone in the frontline of NHS is aware of; that there are millions of dedicated and hard-working professionals who are all too often betrayed by bureaucracy and a management that is too often duplicitous and riddled with nepotism. His efforts at “whistle-blowing” are draining and ultimately futile but the chapter on his refusal to play the interview game and instead record a video for his “presentation” verges on inspirational for those who have the guts to carry it off.

Not content with a well-full of anecdotes, Hartley has also recorded an excellent CD to accompany the book with Park Keeper being a personal favourite tale of pomposity and jobs-worthiness.

Painting Snails is often hilarious, always conversational and at times inspirational and is very strongly recommended.

Stephen John Hartley is on Facebook and Tweets as @elirecords1