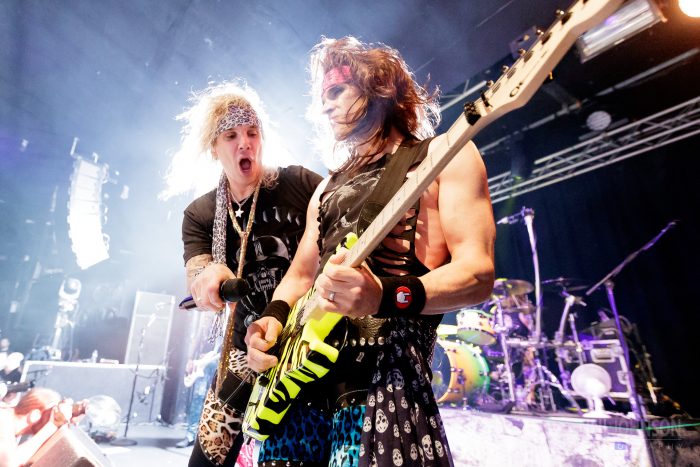 Steel Panther are back in the UK, continuing to sell out venues, shocking, amusing and entertaining all those that cross their path. Neil Johnson nips down to the glory hole (Rock City) to catch the show. 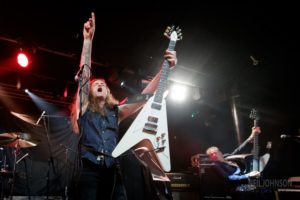 Tonight starts with Wayward Sons, Toby Jepson’s new band. If that name is familiar, it should be. Toby was the vocalist for Little Angels. Back in the day, they were a serious force on the UK rock music scene. Wayward Sons is a different kind of band, but as Toby walks out there are shouts of “I love you Toby!”  clearly the Nottingham audience hasn’t forgotten him. They dive straight into Alive from their first record, Ghosts Of Yet To Come. Toby in fine form and his new band tight and punchy. It’s an utter pleasure to watch their set.

Moving on to Inglorious, who have enjoyed a somewhat meteoric rise over the last couple of years. A stellar couple of albums and a solid live schedule have earned them a big following. During tonight’s show, the Download lineup was announced and Inglorious was confirmed on the main stage. The band seemed more surprised than everyone else when the news was announced, which really sums up the genuine nature of their live show. They come across as a really likeable bunch of guys who would be just as happy playing a tiny bar as Wembley stadium. They open 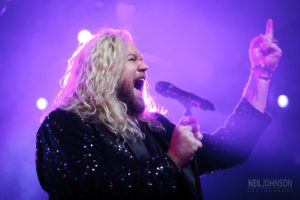 tonights set with Read All About It, which is a super stompy track with a chorus built for singing along to, which the Rock City crowd were happy to oblige. Nathan James vocals are extraordinary, he has such a great range and impact. He also never seems to stop smiling and dancing! Their set was a great showcase for their relatively short back catalogue, Taking The Blame and Until I Die were delivered with deft precision and went down especially well.

As we wait for tonight’s headliners, It has to be said that the Steel Panther show has a certain reputation, however, I was a little surprised at the range of people in the audience. A total mixture of young and old, male, female, those who were dressed up like the late 80’s hair metal bands that Steel Panther make fun of and those who weren’t. The atmosphere in Rock City is upbeat and bouncing, everyone smiling and having a good time. The appeal of the music and comedy are clearly broad, hence them selling out wherever they go.

The Panther kicks off with the fitting Eyes of a Panther, Goin’ in the Back Door and Asian Hoooker. But, there is a huge gap between Back door and Hooker while Satchel and Michael discuss the finer aspects of groupies, make fun of Lexxi, bass players, drummers, discuss who owns the band rights, plus how much money they get per track streamed on Spotify. This band can talk… and talk! Thankfully, it’s entertaining, even more so if you were a fan of hair metal back in the 80’s when the stuff they are sending up was actually being done for real.

The show continues, the band are amazing to watch and listen to. As much as its tempting to write these guys off as a comedy band, they can play, and play well. The guitar work is super precise and if it wasn’t for the incessant toilet humour and innuendo littered throughout each song, you could easily be back in 1988 at a Poison or Warrant gig. The thing is though, the innuendo and humour make the show work for a modern audience, without it, they would just be another glam band playing hair metal and frankly, I’m not sure anyone wants that anymore. What you get at a Panther show is all of the best bits of 80’s hair metal and a bit of poking fun at how absurd it all was even when it was cool.

It’s hard to pick highlights from the show but Wasted Too Much Time and Gloryhole were standouts, as was the classic Death to All But Metal. I also loved how they had the lead singer from Surreal (Steel Panther tribute band) up to sing on That’s When You Came In.

All things considered an absolutely great night and a great show by everyone, Wayward Sons and Inglorious are two bands on a roll right now and Steel Panther is an experience not to be missed! Toby Jepson though!! what a pleasant blast from the past, I think I’m going to settle down and enjoy Don’t Prey for Me, you probably should too.