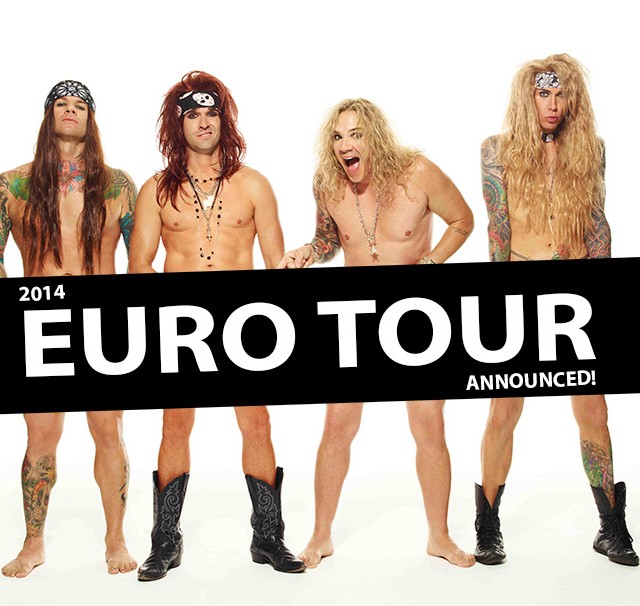 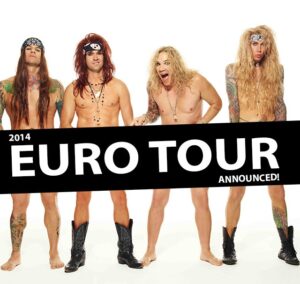 Los Angeles Glam Metal band and purveyors of all things spandex Steel Panther are upon us again with their imminent 3rd album “All You Can Eat” and yet another sold-out UK tour. Check out our review of the album here and our review of the Nottm date on their tour below.

Coming across like a suntanned version of The Macc Lads with freshly inked Kat Von D tattoos, Steel Panther take every cliché from the LA Glam / Hair Metal scene that was a world dominating force throughout the eighties and early nineties, multiply it by 100, cover it in hairspray and serve it up in a magnificently foul-mouthed and crude way.

There can’t be anyone left these days who still believes Steel Panther are an actual band, the line they draw between gig and comedy show has become finer every time I’ve seen them and the shows slicker, with bigger productions.

Having negotiated the nightmare of average speed checks that slowed our progress down the M1 southbound to a snail-like 50mph, we finally arrived at the venue, Nottingham Rock City about 10 minutes before Steel Panther were due onstage. This gave us just enough time to fight our way through the sold-out crowd to the bar and purchase a wallet-crippling pint before taking up our viewing position as close to the front as was polite to get to.

There was a very good natured party atmosphere in the main hall of Rock City and as the sounds of ‘Number of The Beast’ by the eternally dreary Iron Maiden heralded the arrival of Steel Panther to the stage, the anticipation levels and screaming intensified.

Kicking off with ‘Eyes of a Panther’ it was clear that even two dates from the end of a nine week European tour the band were very much up for it. They threw every “Rock God” pose in the book and probably a few more that were best left in the eighties, frontman Michael Starr covering every inch of the stage and interacting with the crowd like “a skinny Vince Neil” (or should that be “a fat David Lee Roth?”)

And so on it goes, add numerous gags about “Pussy”, “fucking Fat Chicks”, “doing cocaine” and let’s not forget, “Boobies” and you should get the picture.

For all the dumbness that Steel Panther try to portray in their skillfully crafted parody of a genre that they clearly love, it’s more than apparent that beneath all of this, they are supremely talented musicians who can write songs every bit as good as the original masters of the “Cock Rock” scene.

The classics were all present and delivered note perfect, from “Asian Hooker”, the utterly sublime “Just Like Tiger Woods” and to the cautionary tale of “Turn Out The Lights”.

The only low point of the gig was the inevitable “Let’s get some hot chicks on the stage” segment. Far be it from me to pass judgement but come on girls, a little dignity and self-respect please?

After the anthemic call to arms that is “Death to all but Metal” and it’s threat to do something unspeakable to Madonna, the band left the stage to “Do some fuckin’ blow, Dude” and returned shortly for a 3 song encore.

Michael Starr sang the first line of “Community Property” and then the entire crowd took over, word perfectly for the remainder of the first verse and chorus while the frontman stood there looking genuinely emotional and humbled.

The humility was short lived as the band finished the song and followed it up with the subtle as a sledgehammer “Seventeen Girls in a Row” and brought the evening’s festivities to a close with the Steel Panther manifesto of “Party all Day (Fuck all Night)” and a few well placed confetti bombs for good measure.

All in all, a good nights entertainment. I’m not going to try and intellectualise the ins and outs of the whole Steel Panther thing, as far as I’m concerned it is what it is. Everyone knows what they’re going to get if they go to a gig or buy a record, if it offends or you consider it to be moronic, the answer is quite simple. Don’t get involved.

The post-gig analysis as we crawled back up the M1 was mainly based on “is the joke wearing thin” and “how long before the UK’s love affair with Steel Panther starts to fade”? The way things are looking with their gigs selling out consistently and the albums doing good business, I don’t think it will be anytime soon.