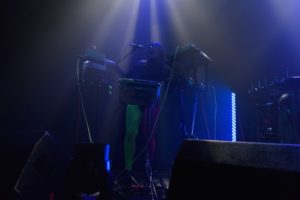 An ethereal set clouded by a thick haze, with the odd shimmer of glitter from Liverpool’s finest Stealing Sheep a triumphant return to Newcastle.

Having finally returned with the follow up to the infinitely wonderful Into the Diamond Sun, Not Real is an equally beautiful record. Tonight sees them finally returning to Newcastle in support of this exciting record, with their friends Everything Everything in tow. With the stage filled with a thick haze, they take up their positions surrounded by electronic gadgetry.

Stealing Sheep waste little time with their ethereal disco infused pop tracks shining through from the outset, despite being bathed in darkness. The odd glimmer catching on their glitter emblazoned eyes, as they dazzle everyone with the quirky rhythms. With the title track Not Real being an early highlight, its funky pulse is matched by a pounding heart.

Not Real has seen the band polish their sound and there is a slickness to the set. The exquisite synthesised basslines don’t fail to get this packed crowds’ hips shaking. Particularly new single Apparition, this twee electro pop number has a great groove to it. The track sounds otherworldly, its shamanic chanting that features a slight twinkling, before maturing into this beautiful soundscape.

Again the pounding heart of the set is the heavy drums, which become the highlight of the set in their own right. As the band finish with a beautiful rendition of Shut Eye, arguably the best track from Into the Diamond Sun. A chugging dancefloor filler, the funky swagger of this track sees the band going out on a wonderful high.

Despite the shortness of the set, Stealing Sheep leave the stage to a rapturous reception which is a perfect return to Newcastle for the band. Everything Everything follow with an equally upbeat set, featuring Stealing Sheep on backing vocals for a euphoric rendition of Regret. In all an uplifting evening from two of the quirkiest yet most intriguing live bands around.