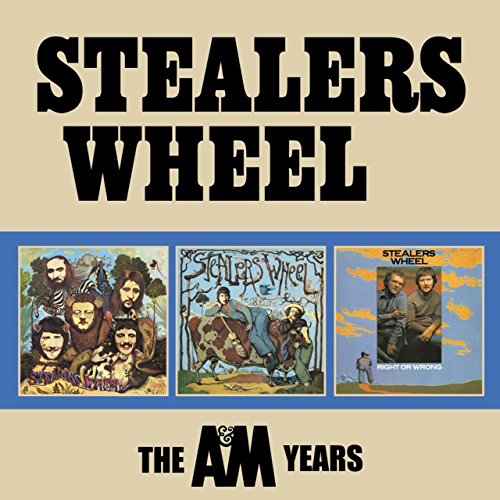 3CD boxset including all that Stealers Wheel recorded for the A&M label in 1970s including their big hit Stuck In The Middle With You, famously featured in “Reservoir Dogs”…..LTW’s Ian Canty lends an ear…………

After splitting up his Humblebums partnership with Billy Connolly on realising that they were heading in different directions (comedy and music), Gerry Rafferty formed Stealers Wheel with his Paisley childhood pal Joe Egan. They had a bit of previous, having played together in a number of small-time local outfits in the 1960s, but this new band would have a much higher profile. After forming in 1971 backing musicians came and went, but by the time the band inked a deal with Herb Alpert and Jerry Moss’ A&M Records, the line-up had settled down to the core duo of Rafferty and Egan aided and abetted by Rod Coombes on drums, guitarist Paul Pilnick and bass player Tony Williams.

Duly a self-titled debut album appeared in 1972. It was produced by prolific Rock ‘n’ Roll songsmiths Jerry Leiber and Mike Stoller and housed in a bizarre cover with a painting depicting the band as jungle animals! The contents inside more than made up for this slightly off-putting image. Though a bit of a slow burner sale-wise, this was to be their most successful record, containing the single Stuck In The Middle With you that went onto become a Top Five hit on both sides of the Atlantic. Opening track Late Again has the pair duetting on a sad but finely drawn lament to past wrongs, but this sorrowful mood is quickly sent on its way by the irresistible bounce of that single.

There’s a natural ebullience on display here and a bit of a late-period Beatles influence too (by co-incidence I assume, the record was produced at Apple Studios), with Rafferty on Johnny’s Song sounding a possible heir to Lennon, but with his own easy-going style. Though out of step with the Glam Rock that was taking over the UK at the time, they did have their heavier moments too. I Get By for example, is an excellent piece of early 70s Rock & Roll attitude. Outside Looking In is a textbook specimen of Rafferty in his prime, with a neat Psych influence in the background. Overall Stealers Wheel appeared very much as though the finished article from the off, the promise of the combination of two fine talents already coming to fruition.

It’s worth stating here that we shouldn’t see Stealers Wheel as merely a vehicle for Gerry Rafferty’s evident abilites. Joe Egan also brought a lot to the table, being a very able writer and performer, having a hand in the bulk of the songs of the first two LPs. He was as at home with tough Rockers as the aforementioned I Get By as he was with gentler material like the wistful, evocative Gets So Lonely

Here the original album is joined by three bonus tracks coming from a 1971 performance for the BBC. The bucolic flow of the Folk-influenced Steamboat Row would be reprised on the second Stealers album, but the snappy and bright rocker Please Sing A Song For Us sadly never made it to record. It’s a goodie, as is the tough version of I Get By which closes out this section, the energy displayed bettering the LP take.

Soon after the recording, Rafferty opted to leave the band, being replaced by ex-Spooky Tooth singer and guitarist Luther Grosvenor. However, with the success of the single and album Rafferty was persuaded to return to the fold as they set about recording a follow-up. Grosvenor was sent packing, but perhaps had the last laugh by taking up the name Ariel Bender and joining Mott The Hoople just in time for their Indian Summer. A few other line-up changes meant the band was now seen as a duo, with the others pretty much relegated to the role of backing musicians. Only Rafferty and Egan would be seen on the record sleeves, which may have been a blessing in disguise bearing in mind the cover of the first LP.

Second album Ferguslie Park (actually the name of a housing estate in their hometown) was released in 1974. On hearing the first few tracks it is difficult not to conclude that Stealers Wheel had seen the dark shadow behind Pop success over the past 12 months. The cynical side of the “industry” is made clear on both Good Businessman and the hit single Star, which ironically returned them to the US and UK Top Thirty. It was not as big a success as their debut LP, but succinctly displayed the craft at work in Stealers Wheel. Though Rafferty and Egan may not have been as grandiose in their ideas or as over-blown in their execution as say ELO, they obviously had a lucid vision of how they wanted to get their records to sound. On this record they plainly worked tirelessly to achieve it.

There’s a beautiful atmosphere painstakingly concocted on Who Cares and the speedy What More Could You Want is even quite danceable. They usually mixed a little bit of Funk, R&B and Soul in and on this song it all came together. Nothing’s Gonna Change My Mind adds in a bit of Country pedal steel guitar and Blind Faith’s edgy Pop/Rock could have been a hit later in the decade. Everything Will Turn Out Fine is a great album-ender, an irrepressible stomper with a killer hook. An optimistic note to end my favourite of the three albums included here.

By the time that Right Or Wrong was unleashed on the general public a year later, Stealers Wheel were no more. This record was put together with the purpose of fulfilling the contract, never a good start, which belied the cheerful portrait on the back cover of the sleeve. The bitty production process of Right Or Wrong showed through. Though they had never been exactly gung-ho, at times this LP sounds less Soft Rock and more just out and out Easy Listening MOR, with orchestral arrangements slowing the pace down a fair bit and knocking off the agreeable rough edges.

The first side of the original album in particular is awash with the stuff, though flipping the disc over Stealers cut loose a bit more. The Funk-inflcted Let Yourself Go is the stand-out on side one, having an urgency the other tracks lack. As hinted at above, later on the LP improves and the horn-drenched Wishbone is a convincing Bluesy stomp, with some fine chiming Byrds-style guitar enlivening Go As You Please and Monday Morning being a wry Chuck Berry update for the 1970s.

Though most of it is good stuff and no doubt elegantly crafted, it does make for a schizophrenic end to a short but fruitful career. This album divided opinion in the press, but by the time the reviews came in it didn’t matter as Rafferty and Egan had parted company, apparently with a fair amount of bitterness. In a couple of years Rafferty would be heading back to the charts, but for Egan found the going more difficult and after a couple of solo albums he quit playing music in the 1980s.

Though Stealers Wheel are mostly known for providing the backing music to the ear severing scene in Reservoir Dogs today, they deserve much more. Egan and Rafferty perfectly complimented each other and in the best of their work they combined to ferment some perfect Pop/Rock. As for this new compilation of their work, if ornate, literate but earthy Pop Music is your thing, dig in.