Home News Stayin’ Alive Campaign to save the Manchester building where music legends, the... 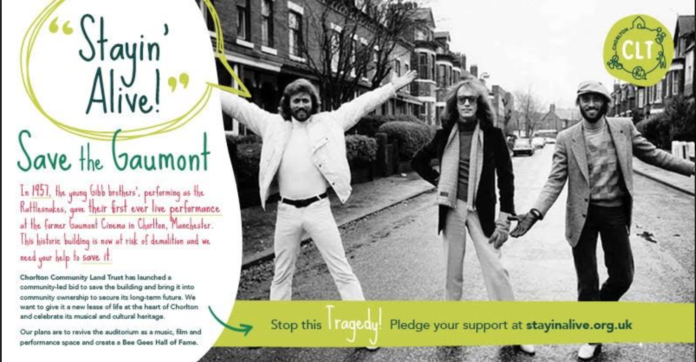 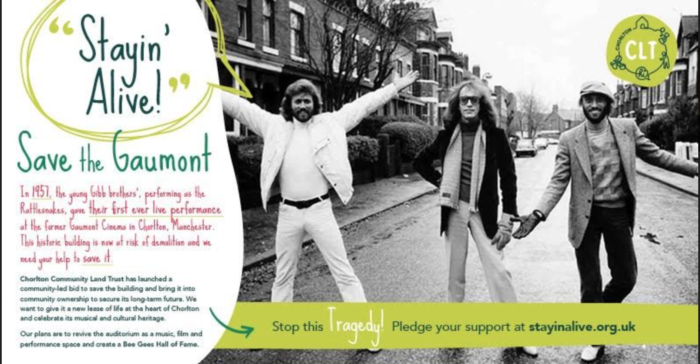 Stayin’ Alive Campaign to save the building where music legends, the Bee Gees first performed.

“Bee Gees fans from all over the world come to have their pictures taken outside – even though it’s a funeral home!”
So says Chris Peacock from volunteer group, Chorlton Community Land Trust, who are campaigning to save the The Co-op Funeral Care from being sold off and turned into flats.
The historic building – formerly The Gaumont – will be 100 years old in 2020 and is the venue where the Gibb brothers first performed in public!
The Bee Gees have sold more than 220 million records worldwide, making them one of the world’s best-selling bands of all time! But before the Bee Gees, the Gibb brothers’ first band, The Rattlesnakes made their live debut at their local cinema, The Gaumont – a stone’s throw from Oswald Road Primary School where they spent much of their school days – and down the road from where they lived on Keppell Road.
In Australia Bees Gees Way was created to honour the band’s hometown in Moreton Bay, Queensland where they lived, having emigrated from Chorlton, Manchester. However, in the UK there is very little to mark the band’s roots.
The CCLT’s Stayin Alive campaign to save the venue and celebrate the Bee Gees’ heritage is getting support from fans around the world, as well as he Bee Gees’ cousins, Hazel and Justine Gibb.  At a recent CCLT campaign meeting on 26 September, Hazel and Justine spoke of how the Gibb family – including surviving Bee Gee, Barry Gibb – are all supporting the campaign. Simon Hooton from CCLT:
“Time is critical to save this landmark building – we have just a few days left to persuade the Co-op to change course. It is an important part of Manchester’s historic music scene so we want to preserve it and celebrate the world-famous Bee Gees and encourage more visitors to the area.”
CCLT have been working with developers and local residents to generate a plan that would help make Chorlton a more vibrant place for residents and visitors and retain this unique piece of music history. The plans are to convert the old cinema building into a market style food hall with flexible scope to also be a performance space for live music and cinema nights. CCLT are also working with the local community health centre to bring forward a new GP Practice with potentially a gym, community space and some affordable housing on the site too. The campaigners are also keen to integrate the development with the upcoming re-development of the precinct and to create a new public square outside the building too.

CCLT have drafted plans (see attachment) and have been liaising with Manchester City Council and also the Co-op. CCLT have been given until this Saturday 9 November by the Co-op and want to raise £250k. So far, £55k has been raised in the first few days!

The #StayinAlive crowdfunding website is now up and running. Follow the link below for the campaign video, more information and to make a pledge:

This is a one-off opportunity to help a community save an important historic building, put another destination on the Manchester music trail and help create a more vibrant Chorlton.