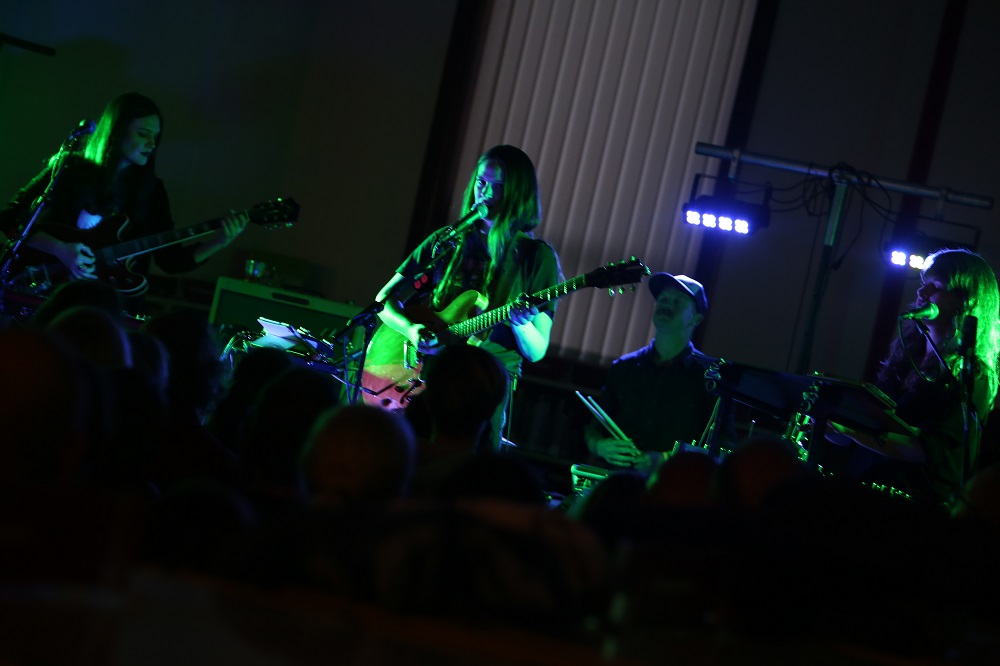 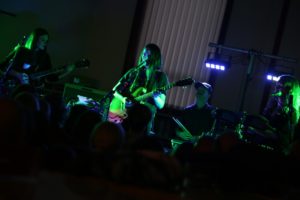 I grew in Barrow in Furness, and as a bookish only child my local library was a second home, so it was an incredibly moving experience watching The Staves knock out a magnificent set in a hallowed place that literally changed my life.

The Staves are three sisters, Camilla, Jessica and Emily Staveley-Taylor, who tonight are joined by drummer Dave Power to promote their second album If I Was. The sisters made the journey from their Watford base to the wilds of Wisconsin to work with Bon Iver, and there’s no doubting he has changed their sound from old school pastoral British folk to something approaching Americana.

This gig was promoted by Get it Loud in Libraries who over the last decade have put on gigs in libraries recognising these spaces are now not just about lending books, but have become multi-media community hubs.

It is a brilliant idea that has even seen Adele play a gig in her early days and tonight The Staves seemed genuinely touched they are playing on makeshift stage in a South Cumbrian public library. Emily even apologises for blagging some of a librarian’s milk from the dressing room fridge.

Unlike Smoke Fairies who went down a similar road but mucked up their sound by rocking out too much, the addition of Power’s clever drums has added some pace and bite. On tunes like the brutal Blood I Bled’s full on guitar and keyboards the drums underpin their ethereal three part harmonies.

There is plenty of good natured sisterly bickering going on, as being surrounded by books seems to relax them especially on an epic Make It Holy as their voices soar and climb round the bittersweet words. They use just their voices on a moving Don’t You Call Me Anymore which you can’t help but think is based on hard won experience.

Loops seems to be in vogue these days with close harmony groups, and the sisters introduce them for Let Me down. They just about control the torrent of pin sharp vocals that threaten to overwhelm the senses. You will not hear a sadder song all year than No Me, No You, No More focusing on the lies lovers tell each other.

The Staves are also very funny and the more bluesy, world weary sound of their new single Tired As Fuck hinted at a very fertile new direction before they went off for an encore crouching awkwardly behind the book cases as the sell-out crowd shouted for more.

They came back on to read bits from Bobby Robson’s autobiography which they had liberated at random from the sports section. There is nothing to beat the instinctive sound of siblings singing together, and the Staves save the best for last as they strip back Springsteen’s I’m On Fire really getting into the true intent of a master songwriter they describe as one of their favourites. They finish off with a heartfelt acoustic version of Mexico from their debut EP as the sisters gather round the mic singing their hearts out in perfect harmony.

There is a genuine intelligence and substance to The Staves, and they have clearly benefited from Bon Iver’s brilliance as a producer. Yes, they have such great voices they could get away with just churning out the same old folk tinged tunes, but they took a risk with their sound that paid off.

This was a deeply personal experience on so many levels, and some 50 years after joining this library seeing it full of people enjoying a gig would have beyond the wildest dreams of the younger me or the old school librarians. Yet the shadow of that young boy lurked somewhere in this crowd silently clapping a band who are utterly confident in what they are doing.

More information about Get it Loud in Libraries here. Information on The Staves can be found at their Facebook and Twitter pages.