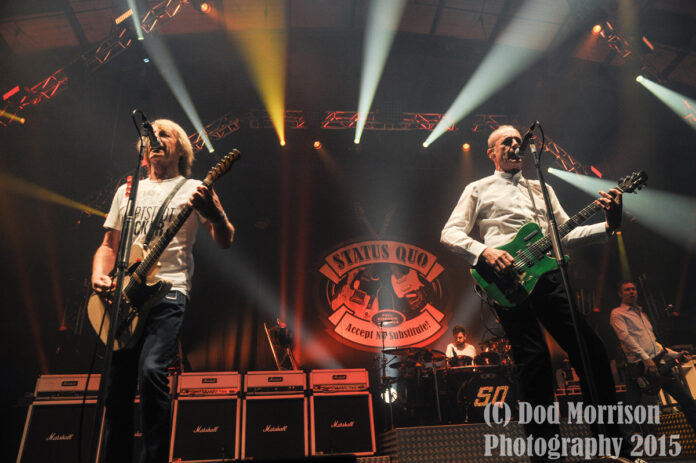 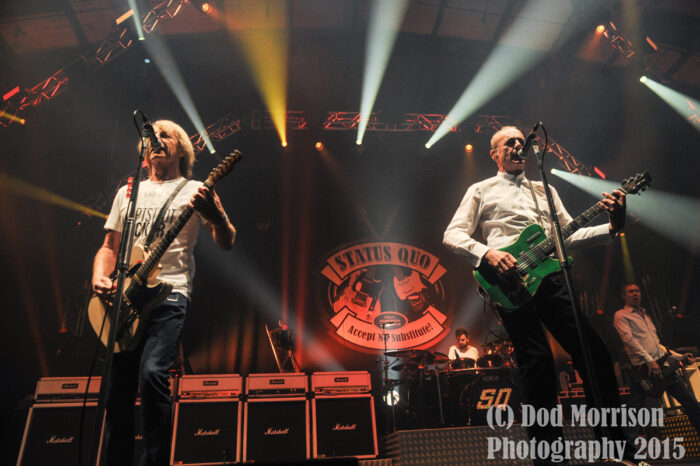 Sadly, an electrical problem (possibly caused by the onset of Storm Desmond, which was pounding The Hydro from Friday afternoon) delayed the start of the show until a good 15/20 minutes after Wilko Johnsons advertised `onstage` time. This resulted in his set being reduced to a mere 5 songs!! Yes, 2 of them were `Roxette` and `She Does It Right’, but that did not alter the fact that the band was finished their set and off stage before they had even really got going!…A real shame, particularly for those among tonight’s crowd who had come to hear Wilko rather than The Quo! The sound for Wilko was fantastic, but the lights, regretably, were basic at best……Frustrating. 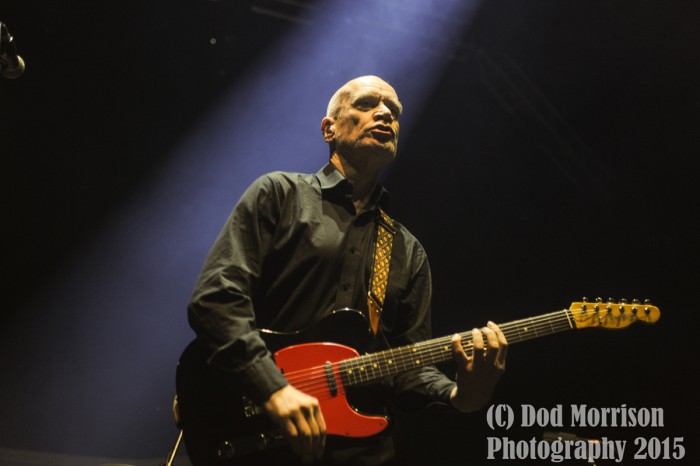 STATUS QUO……It`s almost impossible to believe that Status Quo first evolved in 1962!!! But it`s a fact none the less….5 decades on though, and with a handful of personnel changes along the way…the band still ROCK!!!

From the moment they step onstage, it’s obvious that all 5 of the band members are charged up and ready to rock…..Kicking off, as ever, with ‘Caroline’, they launch into a 90 minute set that encompasses their entire career; they have a new lighting rig for 2015, but the same white backline – a major strongpoint. Their 90 minute set covers pretty much their whole career, Rick and Francis are on magnificent voice.

It`s noticeable just how close the band members are throughout the set, with all five of them spending a fair percentage of the set in the central area of the stage. All 5 of them are clearly enjoying the show and are also communicating with one another all throughout. Their set covers each decade of their career, although with such a huge back catalogue, it must be SO difficult to decide which songs to play….`Gerdundula` is back in the set, with drummer Leon Cave alongside the other four band members front and centre stage, playing a single drum .

Francis, Rick, Rhino, and Andy meanwhile jostle each other and interact with one another all during the song; each one vying to be in front of the other. Their smiles are reflected by those of the crowd, and they time the song to perfection, rather than stretch it out a bit too far as they had done when it was previously included in their set. All five are in fantastic voice throughout the show. Francis entertains us with some banter between songs as per usual…There are more `highlights` than it is possible to list; Leon Caves drum solo is just the right length and the multiple spotlights that focus on him during it really highlight his ability perfectly. He may be the newest member of the Quo, but his solid drumming and vocal contributions undoubtedly make him a key member of the current line-up.

Andy Bown plays guitar as much as he does keyboards these days, and clearly relishes being able to get out front and prowl the stage interacting with the fans as much as possible; Rhino is in his element too, making a lot of contact with the crowd throughout the 90 minute set. `In The Army Now` is a massive sing-a-long and `Burning Bridges` has us all up on our toes as Rossi commands. But, as always, the gig flies by all too quickly and the band finally depart to a massive standing ovation.

Yes, they can only fill the floor and first tier of The Hydro, but there are far bigger bands who will play here and generate only a tiny percentage of the excitement of a Quo gig…. Long may they continue!!! 7 Decades??