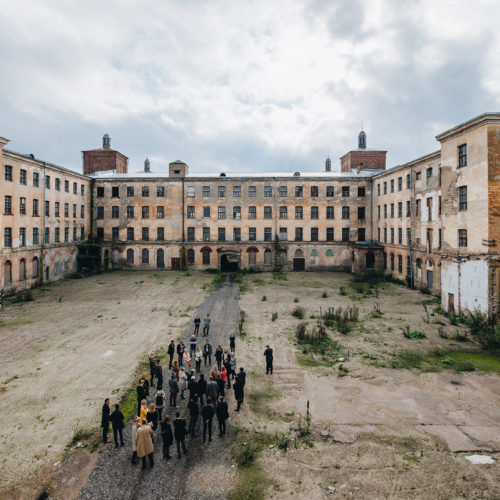 Can music change the world? John Robb reports back from a unique festival rejuvenating  Narva – a small city on the Estonia/Russia border – with cutting edge music, ideas and culture and driven  by the inspirational team behind Tallinn Music Week.

The power of music may have become diluted over the years as we are drowned in the stuff. Muzak dribbles out of mass media, plods away in gyms, whines in shopping centres and steals your concentration with its dull emotional pulse wherever you making you sometimes forget its inspirational power.

Those life changing moments that the electric shock of great music provides may be blurred into the digital ether but the micro revolutions still flare up. The personal leap from monochrome to dayglo that music provides still goes on as a few more of another generation see the world in full colour with music as the portal to a wide screen life.

On a bigger and more ambitious scale Station Narva is trying to change a whole city with the power of music and culture. Narva is the third biggest town in Estonia – the remarkable country tucked away in the coroner of Europe that is moving swiftly into the 21st century. Moving with a forward thinking culture that makes lumbering dinosaurs like the UK look tired and old. It’s capital city, Tallinn, is a mixture of old town beauty and hi tech futures glowing after inventing Skype in its cobbled streetshas a music scene to match with the amazing and haunting  Maarja Nuut or the mainstream rap success of Tommy Cash which is all underlined in the annual Tallinn Music Week – the best music showcase event in Europe.

Not content with this, the team behind Tallinn Music Week – the wonderful Helen Sildna and her dynamic crew, have embraced a broken city two hours drive to the east on the Russian border called Narva and in a remarkable initiative are attempting to spread the high decibel love. The power of music is regenerating the town from new arts centre and venue, a lick of paint and, more importantly, a connection and hope instead of isolation and deprivation.

Narva is a 90 percent Russian speaking town in the Russian part of Estonia. It once had the largest mill in Europe – the 15 000 people employing Kreenholm Mill, which means Crow Island in English. The mill shut over a decade ago and the town was cast away, trapped by geography and history and rumbling with discontent.

The Tallin Music Week team moved in last year and promoted the first Station Narva festival headlined by Echo And The Bunnymen and Shortparis, putting it the town the musical matrix. They have returned for the second year in the newly reconstructed arts and culture centre which is one of those perfect European venues with a great PA and the energetic bustle of optimism and art resounding around its freshly painted walls. The sparks of life are returning to the town and the main drivers are now the local Russian Estonians with their Estonian friends stepping back where they can – it’s an object lesson in a new European future where people get on with stuff and leave the bickering to the millionaires, the media and politicians.

This year there is a great bill of talks about how to create a future for these towns like Narva. As we wander around the town and peer over the narrow river into Russia and then back into Europe we feel the unique crossroads that the town, like history, is at.  Narva is not on the edge – it’s in the middle – a unique opportunity to join Russia and Europe together. A fulcrum. A bridge. An example of another future in a different kitchen.

Music, as ever, is the glue and the bill of bands is filling the rooms with joy and great sounds. Inturist are from Russia and despite half the band not being allowed over the border because of the 21st century love of pointless visa hassle turn in a great set with only two of them on stage. Delivering a hypnotic jam up between the bassist and skronk sax player, it’s like no wave dealing out its angular shapes with a dose of the long lost Morphine and their nocturnal drones and UK post punk outfit Blurt’s post punk sax pop/noise. It’s of course hypnotic and wonderful.

Later on we are in a really venue by the river – a drinking den that looks like the hull of wooden ship with a small theatre upstairs. The venue is by the river front and is so close to Russia that your mobile slips into Russian phone signals. On stage Lemon Trees are dealing their melodic alt rock with adept guitar noodling whilst our old friends, Moja have flown in from Japan for this one blistering show and return tomorrow. The Japanese duo are ferociously brilliant as ever with their pounding polyrthymic drums delivering fractured and thrilling beats and a bass that is cranked through so many pedals that it switches sound from barre to barre with a high IQ and impatient intent. The songs are manic and explosive rushes of energy and ideas and intent and Moto make their very Japanese, free jazz, punk rushes addictive as ever – they truly are a wonderful band.

Aisha Devi is fascinating – of mixed Tibetan Swiss heritage she brings a very mid 21st century to the music room with sparse electronic beats, soundtrack washes and dark atmospheres creating a backdrop to her unique voice that reflects her beautifully mixed heritage. Her charismatic presence domaines the stage as the music takes you on an unfamiliar yet enticing  trip into the possibilities and electronic sound.

Kaschalot are Estonian and deal in the Scandinavian leering  love of punk’n roll that takes the energy of punk rock and the motor city blues of Stooges and MC5 and the fluidity of booze and creates a very Baltic rock n roll. This is a halter skleter verging on the edge of collapse addictive rampage of baseball caps, half shaved bar faces, high energy rock n roll that kicks out the jams.

Headliners on the first night are Icelandic electro pop duo Gus Gus who have gone deeper into the possibilities of digital pop. They are like a 21st century version of the classic synth duos from back in the yore like Pet Shop Boys or Blancmage but with the attendant melancholy of the tundra like landscapes of their home island. In their current 2 piece mode they are at their most flexible and sparse and utilise the adventure of space perfectly. Biggi Veira, ever-present in the group’s intriguing history is still in his high heals and blusher behind the bank of keyboards providing a perfect backdrop for the salacious and sex vocals of current singer, Daníel Ágúst. It’s groin grindingly effective as the songs pound into the packed and swaying room and the legendary Icelandic duo’s techno pop is throbbing and powerful and sees them as the elder statesmen of Icelandic techno orgasm pop that is currently represented by the wonderful sex beat of Hatari – reviewed here.

Asian Dub Foundation headline the second night and the UK based band bring the party with a genuine content. Decades into their own idiosyncratic and thrilling journey, this is the best show I have ever seen them perform. Their melange of punk, post punk, dub, ragtag and Indian musics is a perfect reflection of the real 21st century UK – the UK that is a million miles away from the grey faced old Farage vision of the country. ADF encompass the vibrancy of a future where we bricolage all the great cultures resounding down our streets and out of headphones and car stereos into a seamless whole. The Clash were working on this in their Combat Rock period and I can’t help wondering if Asian Dub Foundation have now finished this great work off. Oh and you can dance to it as well. The deep shuddering bass guitar is dancehall dub heavy and the frantic beats skid your feet and the urgent politically and socially charged voices demand a better future but it’s all joyous and exiting stuff and the room is a meltdown of dancing and good times.

They are the perfect finale to the event – bringing together all the loose strands of culture in the ether and creating a new whole – an example of how to live in the 21st century and like most of the bands on at the festival an embrace of a better future than Trump-world with its ancient belch of monoculture.