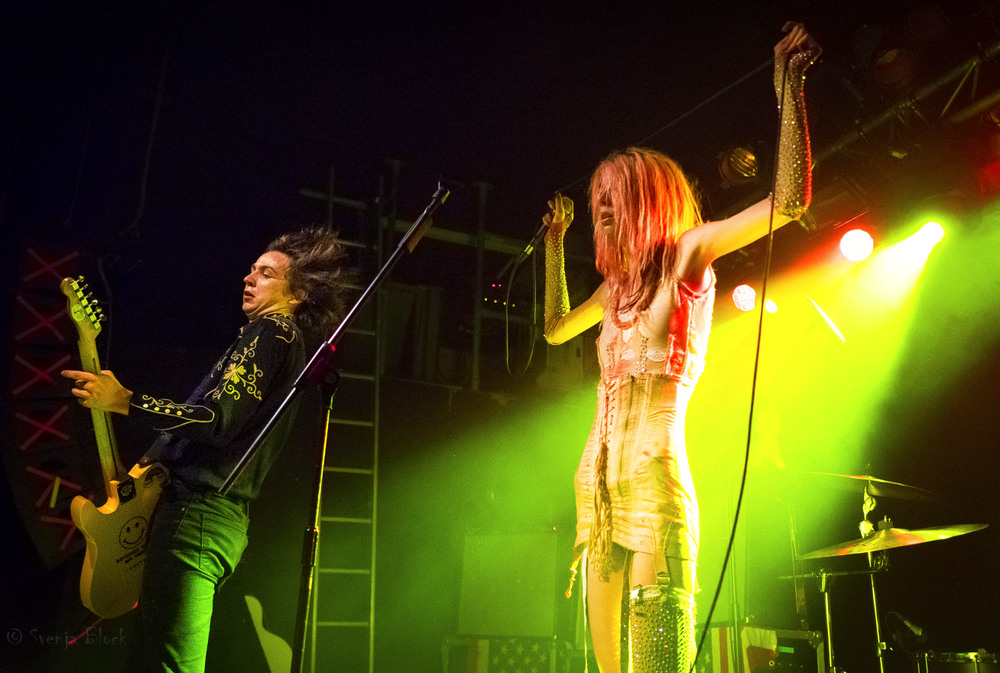 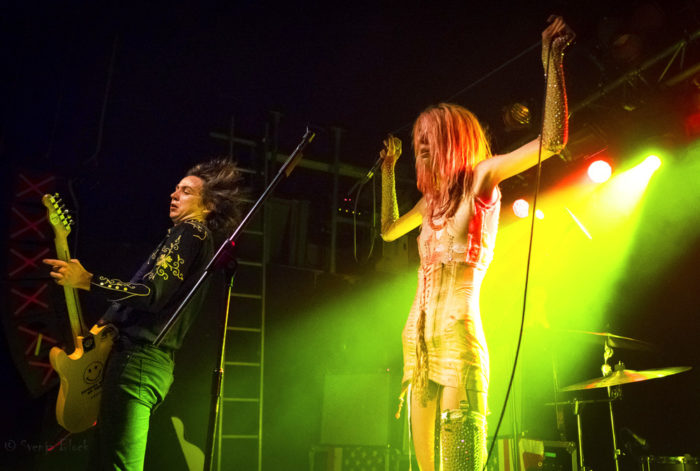 “Let’s not stand too close. I’ve heard she spits blood”, exclaims a concerned punter two minutes to show time. But it’s ok, Louder Than War’s Andy Duke has brought plenty of gauze to Starcrawler’s gig at The Garage in London.

The spectacle of vocalist Arrow de Wilde’s immersive antics with this LA based quartet are as well documented as they are explosive. While undoubtedly carrying the baton from the likes of Daisy Chainsaw’s KatieJane Garside and Iggy Pop, the singer’s seemingly unhinged performance style is very much her own. The band kick off their set before a 600-capacity crowd with Castaway. Swells of guitar feedback, swishing cymbals and rumbling bass puncture the PA before Arrow makes her grand entrance with an effortless backbend. This lot know how to start a show. And a decidedly fast paced one at that. Only five minutes in and guitarist Henri Cash is already bashing out the high string chord motif to their third offering, Used to Know, on his butterscotch Telecaster. By this early point in proceedings, the audience have already been treated to dozens of scissor kicks and windmills from the embroidered western shirt loving axeman. Not to mention witnessing the band’s front woman pull her microphone’s lead around her neck like a noose to worrying effect. 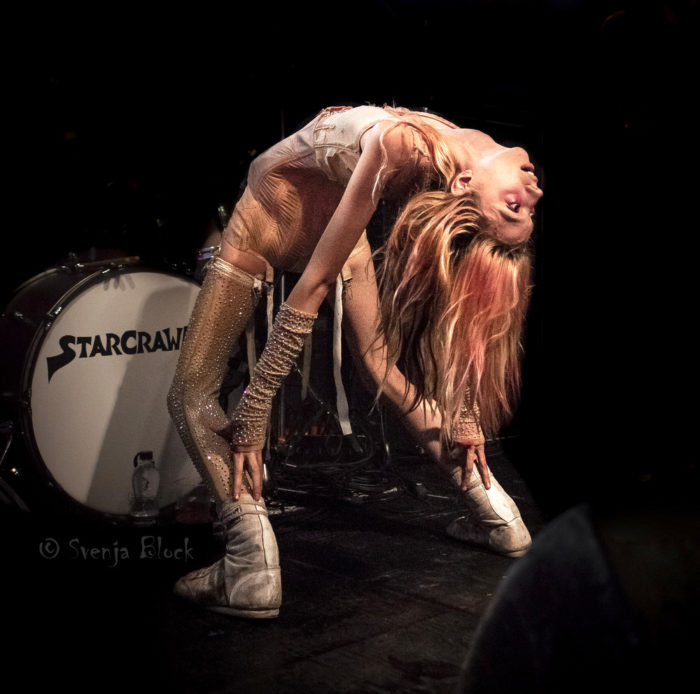 Banter in between the songs is dispensed with in favour of loud and pulsating six-string squeals that make the guitarist’s blackface Fender combo amps beg for mercy. Bassist Tim Franco, in John Entwistle fashion, is as static as he his focused. Averting his normally glued gaze from the drummer to the audience, he summons his inner PiL-era Jah Wobble and begins the haunting intro to Love’s Gone Again. They’re a tight and formidable rhythm section with Austin Smith’s pulls and pushes providing a unique driving force from the drums. The deft skin basher would not have looked out of place in the first incarnation of Kings of Leon with his long and luxuriant tresses. And he’s not scared of adding Bill Ward-inspired fills over effortlessly tight but stylistically juxtaposed Ramones-style beats throughout the set. 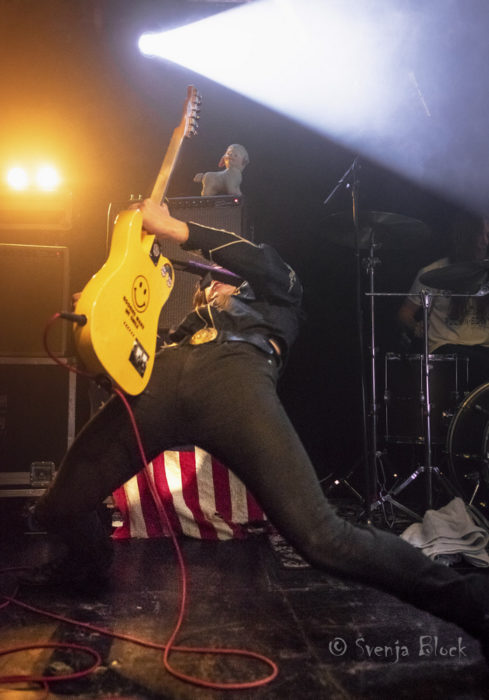 As a live proposition, Starcrawler should be nicknamed Era-crawler as their sonic delivery straddles a varied and surprisingly disparate range of genres and directions. This is a good thing, particularly as their detractors seem keen on criticising the young band for being overly reverential to the 1970s. The call and answer vocals between Cash and de Wilde as featured on Pussy Tower and Love’s Gone Again, for instance, recall the dynamic between John Doe and Exene from the seminal LA band X. And Arrow’s lilting octave jump vocal stabs, showcased to great effect live on Different Angels, brings to mind 80s-era Lena Lovich and Siouxie Sioux. Added into this musical cauldron is a helping of 90s grunge, particularly on the Nirvana-esque Full of Pride, and early Black Sabbath. The latter’s influence is heard in the deliciously sludgy Chicken Woman as well as the end of show instrumental finale. But, regardless of the styles they employ the Californian outfit have the biggest impact with the Garage’s audience when they manage to weave in anthemic singalong choruses or catchy lyrical couplets as featured on I Love LA and Ants respectively.

The foursome finish their twelve song song set with exciting drama. With abandon befitting her surname, de Wilde steals drinks from audience members in the front row before crowd surfing most of the way to an exit at the back of the venue. Drenched in fake blood from her shenanigans earlier, she provides aggressive kisses and hugs to random audience members before disappearing into the night with the band playing on. 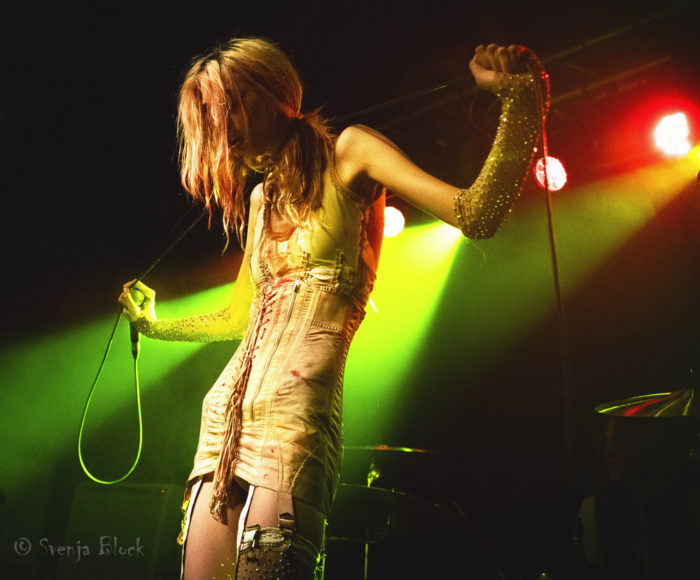 
Please note: Use of these images in any form without permission is illegal. If you wish to use/purchase or licence any images please contact Svenja Block at blocksvenja@yahoo.com.

Starcrawler’s debut album is out now via Rough Trade Records.