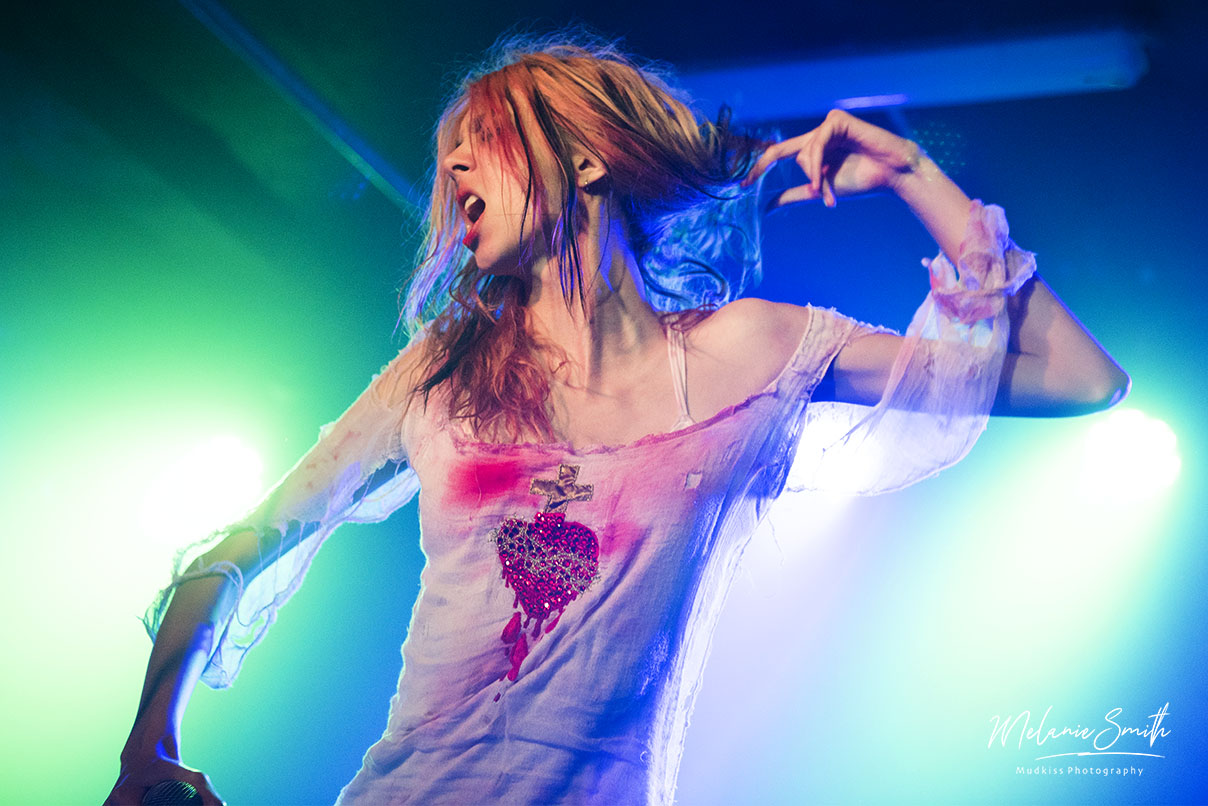 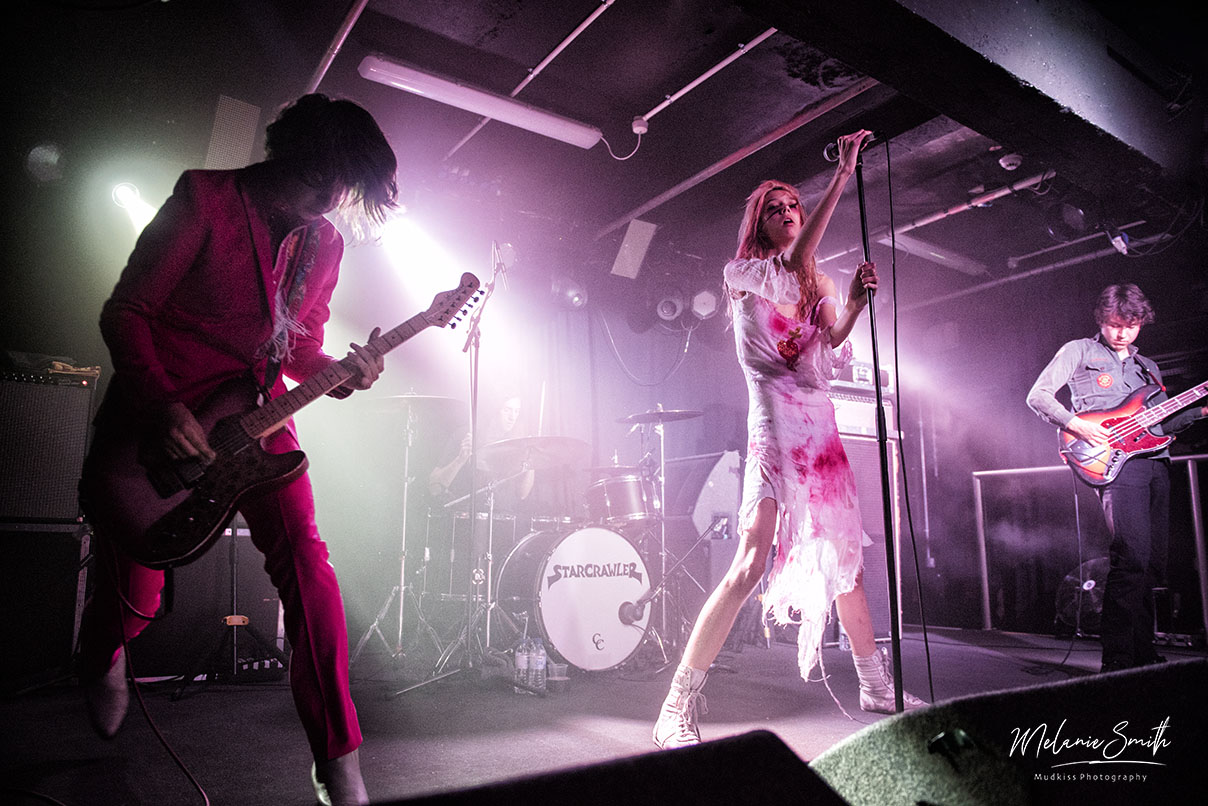 Cazz Blase and Melanie Smith step into the dark and twisted punk world of Starcrawler.

A blisteringly hot day in Manchester feels like entirely the wrong kind of setting in which to be enjoying Starcrawler and Plague Vendor, two ferocious punk bands from L.A, fuelled variously by rage and unknown dark forces. Seemingly gig goers across the city agree with this sentiment as this is a surprisingly sparsely attended gig for the two bands. Those who do brave the heat are in for a treat though as it really is a case of two bands for the price of one.

Plague Vendor, who open tonight, are signed to Epitaph records and as a punk band they are energetic, tight and fierce. They have attracted a small crowd, admittedly enthusiastic, people who are watching them from various vantage points across the floor. While the band play furious hardcore their singer, Brandon Blaine, puts on the show of his life. 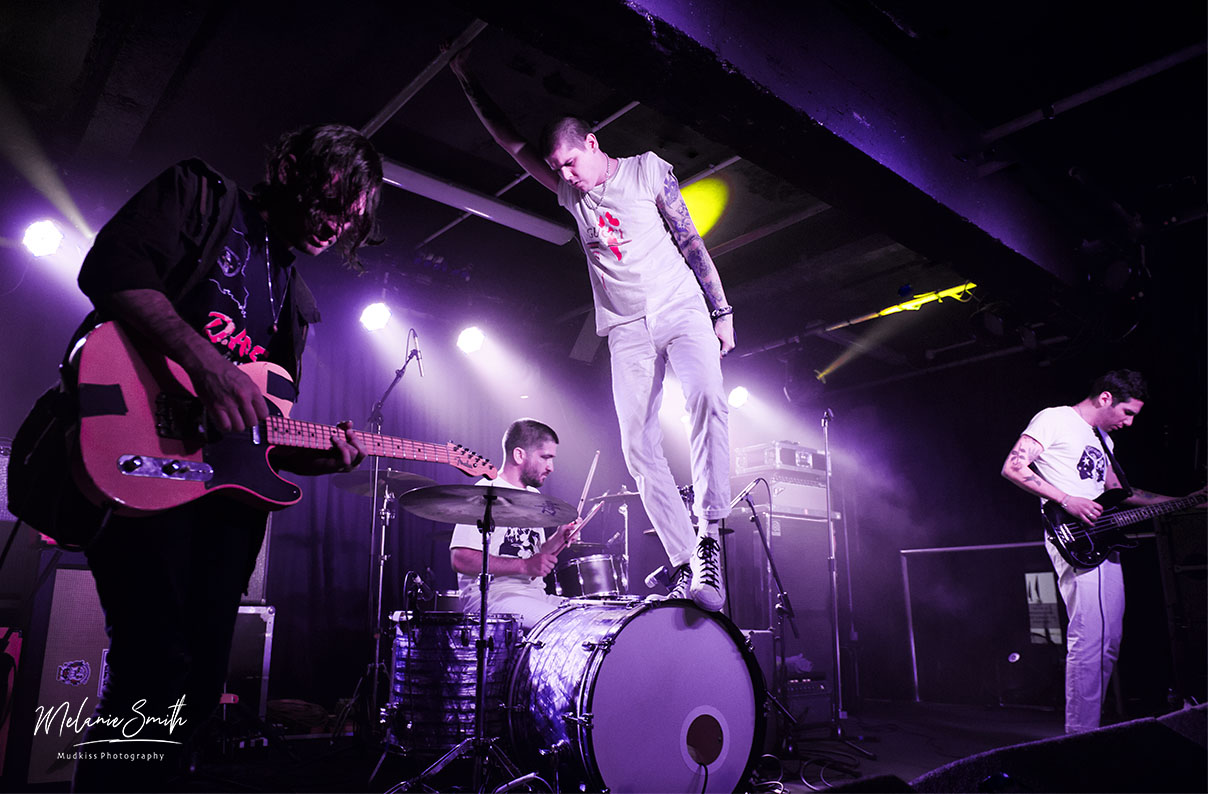 His close cropped hair gives him an air of the late Sid Vicious, but when he borrows a woman’s sunglasses and puts them on he looks more like Captain Sensible. Throughout the set he moves closer and closer to the edge of the stage and, eventually, temptation proves too much and he heads off the stage altogether. Soon he’s in the pit, then he’s over the barriers and into the crowd where he stalks the audience like a panther, prowling as he spits out lyrics, getting in peoples faces. Later Brandon grabs hold of the rail above the stage and swings from it, climbing and twisting on and from it like a gymnastic Ian Svenonius.

As the set reaches its concluding arc, Brandon uses all of his charisma as a performer to persuade the crowd to move closer to the stage, whereupon he moves amongst them, harrying and charming them like he was born to it. As the lights come up at the end of the set it’s clear that Plague Vendor have more than earned their support stripes tonight. 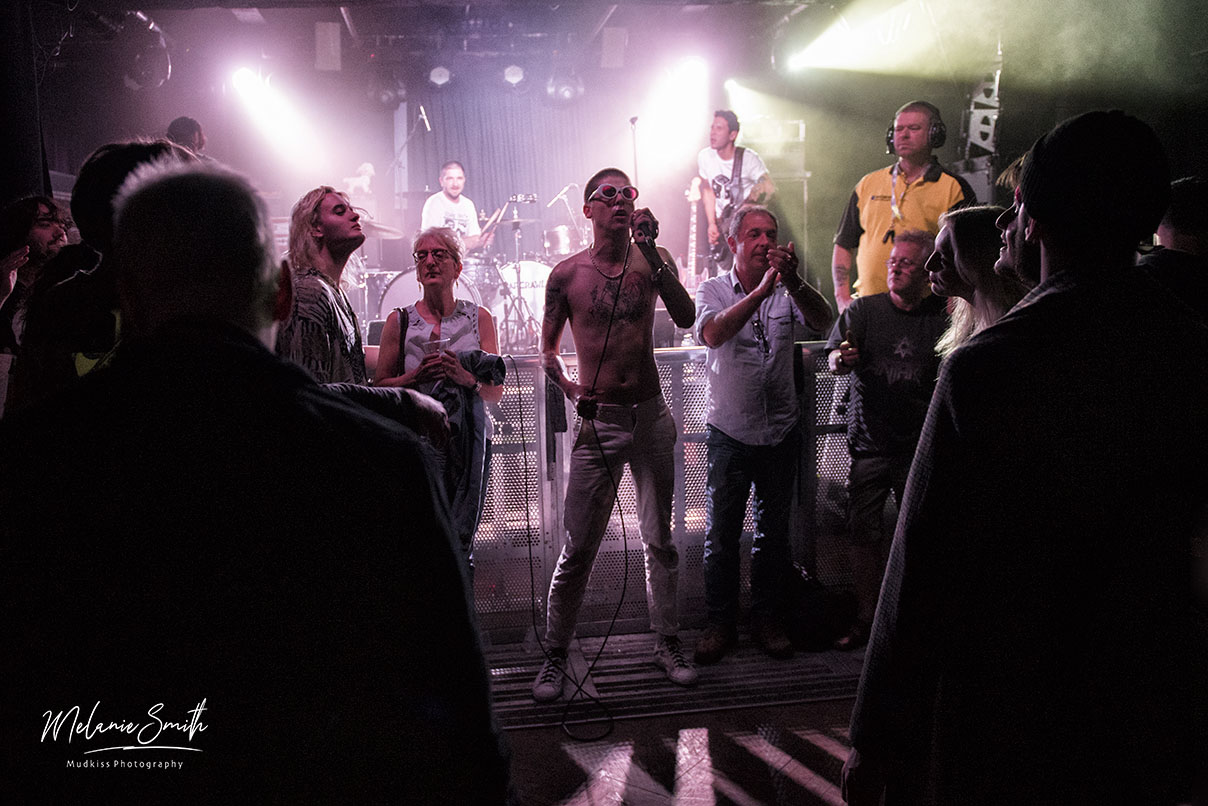 By the time Starcrawler come onto the stage more people have arrived, though it’s still not a huge crowd. As the lights go down the drummer, bassist and guitarist all come onto the stage and the drummer starts up a steady pounding backbeat. Then the guitars kick in, creating a series of long, drawn out wailing riffs.

In the dressing room, a creature stirs and a bedraggled waif with tangled hair hanging over her paint-smeared face, dressed in a tattered and bloodstained white dress stumbles out through the stage door. She half staggers, half walks onto the stage, looking slightly bewildered. Then, she grabs the microphone and begins to snarl, roar, arch her back and generally contort and writhe her way through a set of loud Stooges esque garage punk rock. 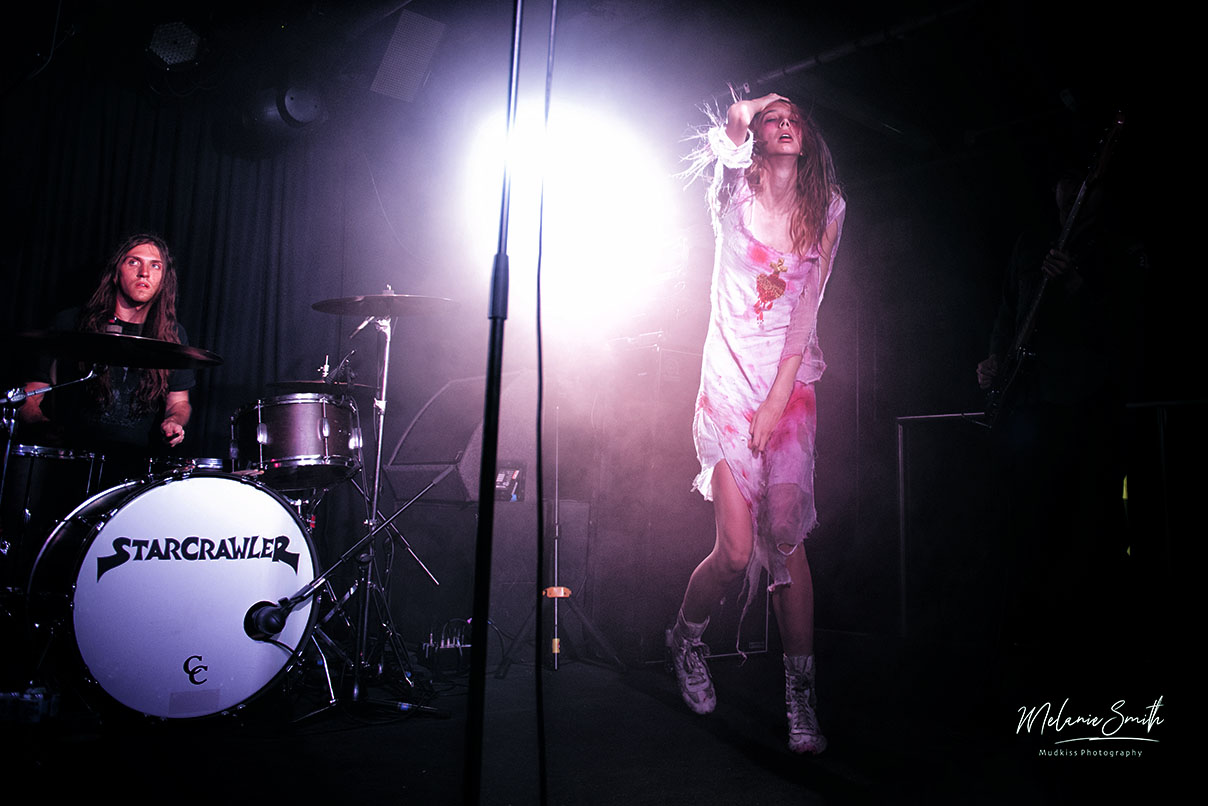 Not one word does Arrow de Wilde utter to the audience, she leaves all the talking to the guitarist Henri Cash, an energetic player with a certain New York Dolls flamboyance and Heartbreakers esque nihilism. At the end of each song the lights go down and Arrow drops to the floor in a protective crouch, her back to the audience. Sometimes she collapses, spreadeagled, onto the stage. 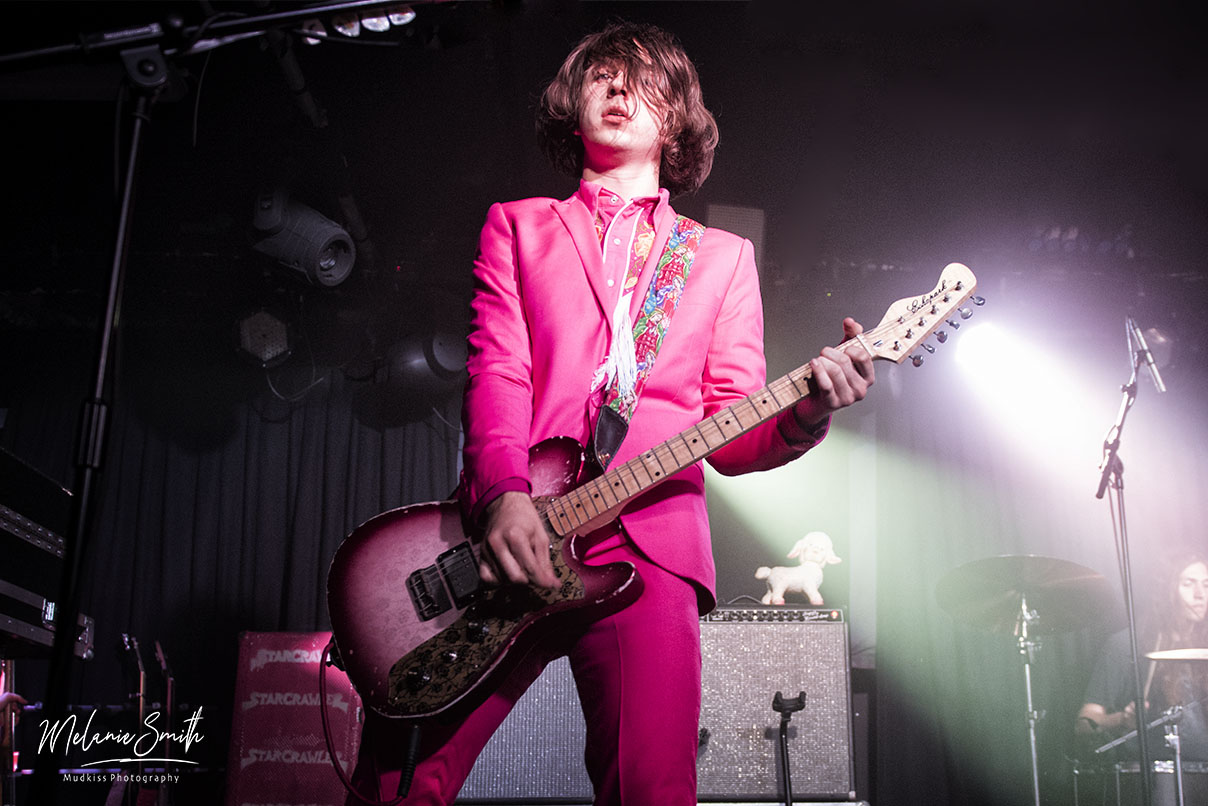 There’s shades of Katie Jane Garside in her Daisychainsaw period here, also Melora Creager of Rasputina, as the very chic neo goth girls in the audience would attest. But the performer Arrow de Wilde really embodies is Iggy Pop: She gurns, she writhes, she gyrates, she puts the microphone up against her crotch and the lead through her teeth. Another touchstone may well be Courtney Love, but Courtney Love having a really, really bad day. 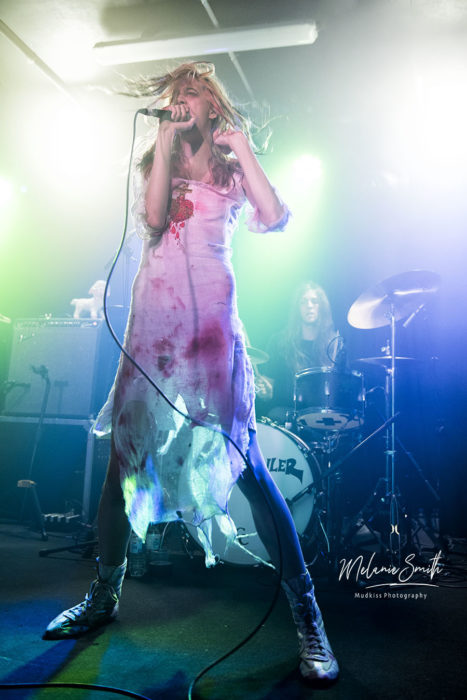 At one point she hauls herself up from her prone state on the stage into a crab position, at another she spits on the stage before spraying the crowd with her water bottle. What becomes apparent as the set progresses is that, while Starcrawler play killer punk rock and while Arrow is an extremely charismatic frontwoman, what she’s bringing to the stage goes beyond a little girl lost performance: It’s something much, much darker than that, as the judicious use of fake blood towards the end, and her overall appearance, suggests. There are times when I feel deeply uncomfortable watching her and I suspect that I am not alone in this.

By contrast to my own occasional discomfort, the tiny woman next to me is gripped and doesn’t take her eyes off the stage throughout the whole performance. She is clearly having a great time. At the end of the set Arrow staggers off stage and crawls through the crowd like the predatory Eli in Let The Right One In. She collapses in a bloodied heap on the floor of the Academy 3, surrounded by audience members. She then returns, through the crowd, in a complex sequence of manoeuvres that culminate in her being hoiked over the barrier head first, legs in the air, before being escorted back to the dressing room. The tiny woman who was next to me, meanwhile, has somehow ended up on stage playing bass and looks ecstatic. It makes as much sense as anything else. 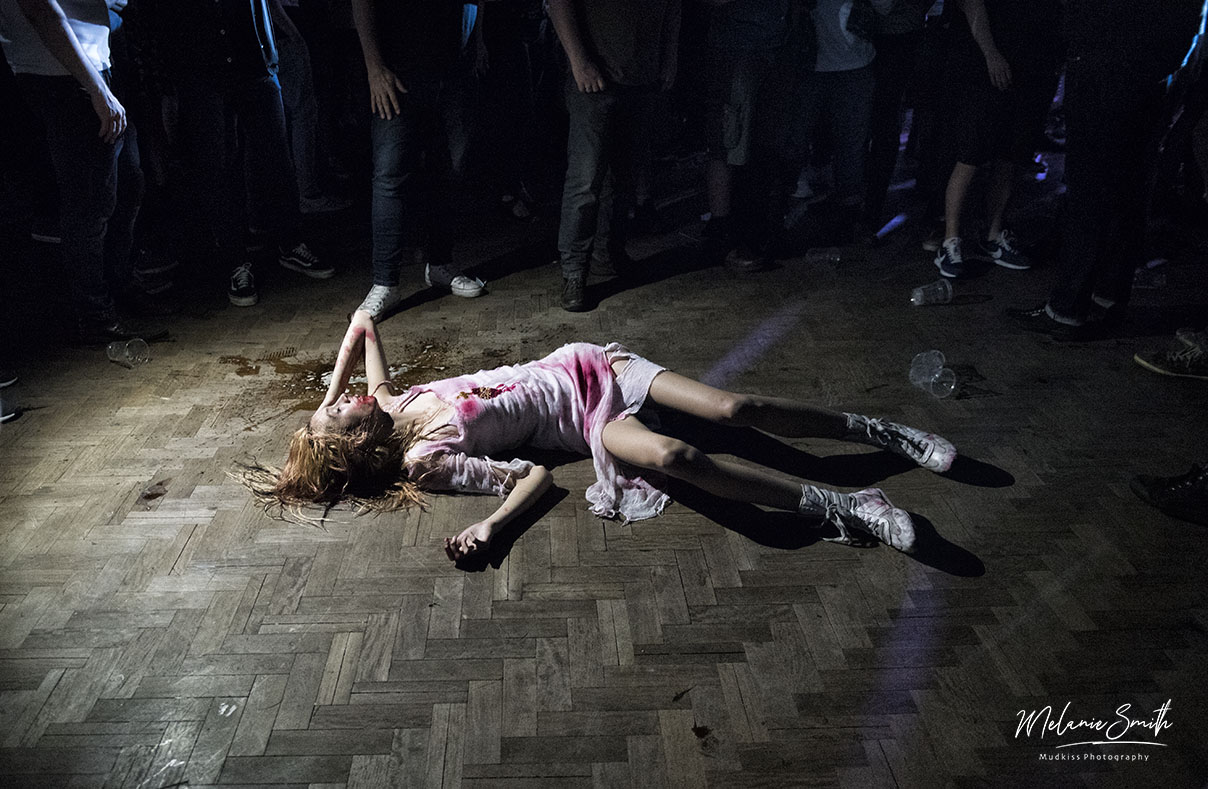