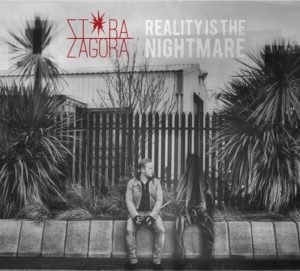 Stara Zagora
Reality Is The Nightmare
Self-released
Out now

Sean McGeoch’s other-worldly project effortlessly transcends its influences on an impressive debut album that carves out its own identity, while conjuring echoes of Mercury Rev, The Flaming Lips and Neil Young

From its bold, wordless vocal intro on ‘Back to Earth’ through to a haunting conclusion on ‘Stick Around’, Stara Zagora’s debut album is an absorbing experience, instantly drawing the listener into a cocooned dream-world that’s both soothing and addictive.

‘Reality is the Nightmare” carries a distinct whiff of mid-70s dislocation, a retreat into inner-space to protect the psyche from the harsh realities of the outside world. McGeoch’s singing may at times evoke Jonathan Donahue or Wayne Coyne, but McGeoch is a superior vocalist, utilising his upper register with confidence to make this a much more satisfying listen than the often strained efforts of the two US psychonauts.

Stara Zagora’s captivating opener, featuring backing vocals from Glasgow singing legend Monica Queen, is a strong statement of intent, but the album really hits its stride on the epic ‘It’s Good To Be Strange’. Based around a hooky chord progression remiscent of The Beta Band, the album’s second track boasts some very effective acid-rock guitar figures.

‘Shoot to Kill’ continues the faintly unsettling atmosphere while adding a dash of Pink Floyd-tinged claustrophobia to the mix. Start Zagora’s melodies and songwriting are strong throughout the purposeful 6 tracks of this fat-free album, which clocks in at a perfect 43 minutes. Producer Johnny Smillie brings all his skills and experience to the recording, ensuring that the album’s arrangements and sonics are entirely simpatico with McGeoch’s songwriting.

Tellingly, the Ayrshire-based singer-songwriter cites Mike Oldfield as a key influence, and this comes through strongly on standout track ‘Night Terrors’, which features the disturbing refrain “We came to crush your spirit”. Whether the song’s subject is the titular anxiety attacks, or a metaphor-cloaked external threat is open to conjecture, but either way it’s a compelling track. Smillie provides a sublime, needling guitar solo that brings to mind David Axelrod-era Electric Prunes.

Penultimate track ‘I Wanna Give You Up’ is an ethereal delight, its spacey atmospherics ushering the listener towards the meditative finale, ‘Stick Around’, a glimmering spiritual of exquisite delicacy which concludes this highly accomplished album on a note of cautious optimism.

‘Reality is the Nightmare’ successfully carves out its own elliptical universe. Slip into the seductive depths of Start Zagora’s debut album and you might not emerge for a while.

Buy ‘Reality is the Nightmare’ here.