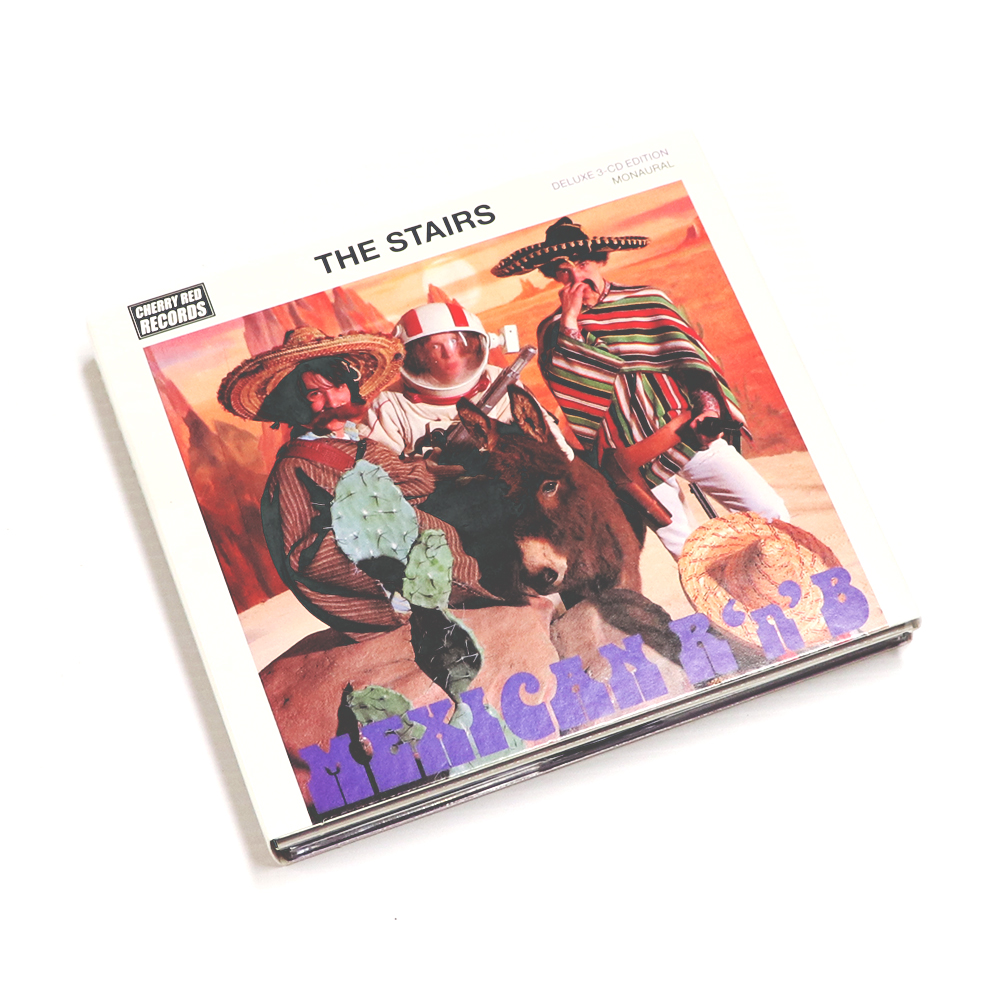 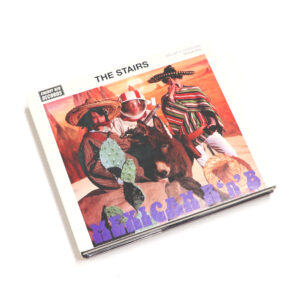 Bumper reissue of The Stairs’ sole album, originally issued on Go! Discs in 1992. This version comes with two extra discs, full to brimming with demos for the aborted second LP, sessions and rarities. LTW’s Ian Canty hears a band wonderfully out of step with the 90s.

To say that The Stairs stood out as something a bit different from the rest of the Go! Discs roster, when they made their debut with the label in 1992, is something of an understatement. Their updated take on classic 60s rhythm and blues was a world away from the political pop of Billy Bragg and the Beautiful South, with only the La’s’ modern version of Merseybeat sharing any common ground at all with them at all. Despite this, their album, Mexican R ‘N’ B met with critical acclaim and one sensed that their sheer joyful energy and winning songwriting signalled the way in the new decade. For some reason, this did not send The Stairs onto the commercial success they deserved, but that is not to negate the album’s worth, and this new upgrade ably demonstrates their strengths.

The original trio that made up The Stairs came together in Liverpool during 1990, with leader, Edgar “Summertyme” Jones having spent some time previously with Ian McCulloch’s band. Guitarist, Ged Lynn and drummer, Paul Maguire completed this initial line-up (Jason Otty would augment The Stairs on harmonica and also appear in photos in the music press). From the outset, the band’s philosophy was simple: they wished to hark back to the vital energy of the original, aggressive sound of early British R&B and US garage with all the wildness that entailed. Though they were not merely content with attaining a status of being a mere covers or copyist band – they were an original act with songs and views of their own and a very definite idea of what they wanted to sound like. As a new decade dawned, people seemed a little more relaxed than in the 80s about delving round in the past for their influences and The Stairs’ manic vim and 60s smarts were a perfect expression of this feeling. Things were opening up a bit again.

Creating a buzz around themselves early on by setting up their own garage club, where they spun classic “Nuggets” tracks and built up their own impressive set of songs, a chance meeting with Chas Smash of Madness (by then an A&R man) led to them being snapped up by Go! Discs just before the Weed Bus EP on the independent label, Imaginary was released. Although the EP got as far as the test pressing stage with Imaginary, a seven-inch of the same name was eventually the band’s first recording issued by their new label.

The first disc presented here is the entirety of their Go! Discs record career, with their debut album, Mexican R ‘N’ B obviously being the centrepiece. It has exciting playing, great songs, irrepressible energy and above all, a hint of mystery that set it apart. They rang true sonically and this record made it abundantly clear this wasn’t just a novelty outfit trying it on. It would be totally pointless to suggest that they weren’t influenced by the 60s, because that is plain as the nose on your fizzog, but the sheer ebullience they bring out in their compositions more than compensates for any feeling derivativeness. A love of those classic bands of yesteryear forged into new and thrilling sounds, which after all is pretty near to what most bands do i.e. use their influences plus their own input to form something fresh. Put simply they were the real thing and Mexican R ‘N’ B is a true beauty, one of the very best records of the early 90s.

Even the often slightly cartoonish (and I mean that in a positive way) Jagger-style twang Jones occasionally affects somehow aids the band’s authenticity, as a lot of 60s garage punk in the US like the Chocolate Watchband and the Seeds went in that direction vocally too. At times they also recall the thrilling explosiveness and ramshackle thud of the early Pretty Things. After a while, like most great albums, you forget about the influences and just get on with enjoying it in the here and now. It may well be a smug soundbite to say that for instance “Sweet Thing may well be the best thing Nanker Phelge never wrote,” but really it’s just a great and memorable song. The Stones were influenced by the blues, garage bands by the Stones and the Stairs by garage, and on it goes…

The weird intro and outro to the album adds to the sense of it being something different, helping set it apart from the pre-BritPop contenders. Mr Window Pane is pure storytelling sneer in the Ray Davies vein and Mary Joanna a giant-sized, gleaming power-pop thrill. Right In The Back Of Your Mind goes about its business in the feral manner of the Stooges, circa Funhouse, a savage pounder. The huge psych-out of Fall Down In The Rain is really something to behold and the more 90s sound of Mundane Mundae is cunningly welded to a fine Hollies/Kinks song/story. The rowdy hum/R&B punk of Wrapped Around Your Finger is another real treat – they never stand still long enough to be workaday, and Mexican R ‘N’ B is still an aural delight all these years on.

Perhaps it was inevitable that The Stairs covered I Can Only Give You Everything, as they do among the bonus tracks on this disc – the old Them/garage standby was a perfect fit for them. Also among the extras, When It All Goes Wrong is sparky and addictive and Fall Down In The Rain enlivened by some great guitar pyrotechnics. I loved the blazing fire of You Don’t Love Me (You Don’t Care) and on Mad Song, Edgar Jones gives a great vocal performance, more Scott Walker than Mick on this one.

The first part of the second disc here gives a view of the band in their formative years, prior to signing to Go! Discs. There’s a little less of the full-on Jaggerisms about the vocals and overall, this is a bit less stylised and looser. The more relaxed approach helps the songs to be honest, making it less easy for people to write them off as copyists. Last Time Around mixes hardcore R&B with psych in a winning manner and they even verge on a country rock/beat amalgam on Mr Joke Shop Owner! For me, Flying Machine works better in its form here – an excellent piece of soulful pop.

Much like their labelmates the La’s, The Stairs fell apart during sessions for their second album. Initially guitarist Lynn left the band and was replaced by Daniel Kierney and Carl Cook, but after several attempts to get a follow up LP, entitled Who Is This Is in the can, the band split in 1994. Recordings/ demos from these sessions make up the second half of disc two and the bulk of disc three of this new collection, along with two tracks from a radio session (I Saw Her Today and Do It To It). The final offering is an Edgar Jones demo of I’m Bored, a song played live by The Stairs, but one the group never got to record.

These later recordings see The Stairs following the general direction of their spiritual forerunners, away from garage and more towards experimenting in psychedelia and blues. They still retained their sure pop touch despite the change of emphasis. Early indications of this drift are the punchy psych of Custard Flys and Skin Up, where guitar crazed funky blues meets stoner proto-metal in an insanely catchy way. It wouldn’t have taken much to imagine When She Walks Down My Street storming the charts, had it gained a proper release at the time.

Shit Town did emerge as a single (but only late in the day in 2015) and it is a real ace, almost a ska rhythm and Cockney Rebel feel to my ears! Do It To It throbs with punky reckless abandon and I’m Bored has Jones sounding like a Scouse Captain Beefheart. All the extras help enhance the set and a thorough sleeve booklet has contributions from the band, giving one an insider’s view.

Since the split, Jones has worked on a number of different projects, including bands the Big Kids and the Isrites, as well as much solo and session work. The Stairs did reform for a while in 2016 and toured, but as yet have not released any new material. So, as I write at the beginning of 2019, what we have here is an engaging and pretty thorough picture of a great band that dared to bring colour and a full-on 60s vibe to the fairly dowdy early 90s scene. A consummately realised reissue.