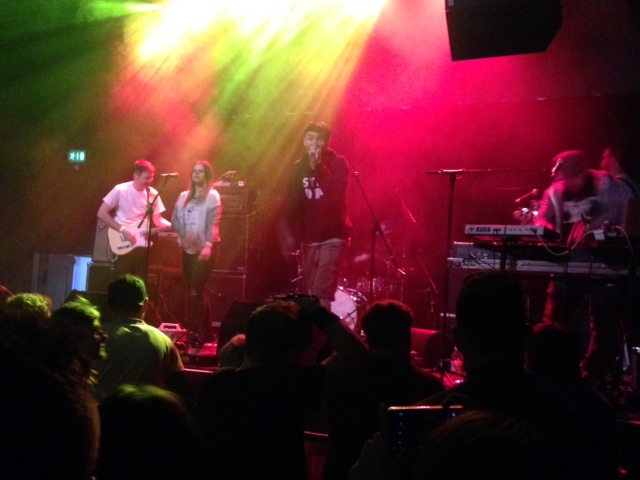 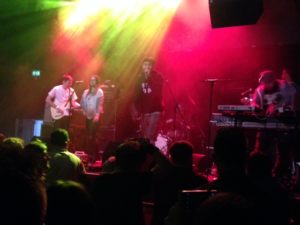 Stag and Dagger Festival
Glasgow
1 May 2016

This multi-venue festival in Glasgow offers up a host of indie delights. Stephen Watt reports.

Twenty notes were enough to buy yourself an Early Bird ticket to Glasgow’s inimitable Stag and Dagger festival. Eight venues in total, extended across the top half of Sauchiehall Street, have provided a mixtape of intensely pleasurable feelings to punters since the festival was brought north of the border in 2009.

Our day began downstairs in the congested Broadcast cellars where newcomers Lovesick greeted the early revellers. Clad in monochrome, the four-piece which hails from Stirling, Glasgow and Holland were a thunderbolt, delivering a swaggering seven-song set. After bassist Stuart Ivans growled at sound technicians for the failure to mic his bass for the set opener, the band’s intense paroxysm worked favourably in producing an Arctic Monkeys-tinted sound in stomping songs such as Free and Follow, evincing all that is good about basement indie shows.

With no other bands yet playing elsewhere we opted to remain in Broadcast for The Ninth Wave. Opener Upstairs People was perhaps apt as one can imagine the crowds at the top of the staircase reeling at the out-of-tune vocals wailing toward them. However, there’s good reason that the Glasgow band have climbed ladders from busking in the city to performing at Stag and Dagger, and their avant-garde chimes improved, much to our relief; none more so than on Liars and Best Friends. Duel-vocals, alternating instruments, and synths kept their brand alive with nods to the Naked and the Famous poppier sound. Another unfortunate lead disconnection mishap mercifully did not ruin an otherwise fine set in front of a relatively staid audience.

With the festival now opening doors at other venues, the crowds began to select their fancy. Next door at Nice n’ Sleazys, Undo were first on with their guitar-driven grunge. It appeared that being one of the early bands on a stage was resulting in sound hiccups as the wail of feedback threatened to shatter even the most plastic cups of cider. Celebrating band member Joe Campbell’s birthday, Undo have only appeared on the scene this year but were fortunate enough to control a favourable audience for at least half their set, with sizeable drumming showmanship featuring on songs Scarlet and Fire Party. A frantic energy dissipated their final song of the afternoon, dedicating it to a relative of Campbell who had recently passed away.

The mid-afternoon crowd was now swelling so it was a little surprising that there were not more people crammed in to the ABC2 to see Dundee favourites The Mirror Trap. At times, the new-wave indie sound opted by the five-piece seemed too busy, promoting Gary ‘Panther’ Moore on vocals in a Simon Le Bon role playing in front of Shed Seven. Audience members appeared a little unsure what to make of the band’s charms, but after a short absence from the music scene and a completely new album to promote, it may simply take a little while for the fresh material to knit its way into the hearts of their fans.

Back to Broadcast for South London wildcats Shame. Where a number of relatively new bands featuring at Stag and Dagger opt to drop their eyes to the floor between songs, Shame frontman Charlie Steen dared the audience to make their move first. This was fearless, animated, post-punk artistry which could well see the band climb from sweaty basements to more prestige arenas. Having recently supported Mark E. Smith’s The Fall, it was easy to see the influence that the sneering Mancunian’s antics have had on Shame with Steen’s semi-rap, spoken word spitting just about managing to avoid parodying Phil Daniels on Blur’s Parklife, whilst running around the room bare-chested, trying to shag and fight everything from the microphone to the upholstery. The lyrics aren’t bad either with songs like Angie in their cannon. Closing with the heart-warming Gone Fisting, the bluesy-punk served up by the young Londoners left a lasting impression on all those lucky enough to catch their set.

After the brashness of Shame, we climbed Scott Street’s hill towards the Art School to catch Glasgow’s West Princes play in familiar grounds of the Vic Bar. This appeared a disappointing set with music created for the sole purpose of shopping centres. Indeed, the most rambunctious element of their set was to gently dry-hump guitars like dogs with itchy scrotums. Leaving midway through, upstairs in the Art School Assembly Hall, the far more zealous Haelos were debuting their dark euphoric sound from album Full Circle, lending a much-needed injection of dance to the festival’s mix. It quickly became clear why Zane Lowe has championed the Hackney-trio of Arthur Delaney, Lotti Benardout and Dom Goldsmith on Radio One as their wonky electronica, shoehorn and synth-organ sounds in Earth Not Above harked back to Massive Attack’s glory years.

The fast drums and squealing guitars of Milk Teeth reverberated in Nice n’ Sleazys shortly afterwards with all five foot of attitude Becky Blomfield leading the band in a Converse-tailored pogo at the front. Despite a nine-hour drive to Glasgow, the Bristolians packed enormous punch on tracks from their Vile Child record. Flanked by Chris Webb and touring guitarist Billy Hutton, there was an evident Garbage-influence rumbling on songs such as Swear Jar while the pop sensibilities of Crows Feet dips into Courtney Love-Hole territory. This was a refreshing return to grunge which is largely missing at present and which Milk Teeth comfortably fill.

In the ABC1, American indie favourites We Are Scientists bouncy guitar riffs and hits such as Nobody Move, Nobody Get Hurt had the enormous crowd lapping up their set. Having featured in a series of their own televised comedic shorts, the Scientists know that their chat in-between songs is a huge element of the charm which maintains them such a loyal following and in Keith Murray and Chris Caine, there is plenty of showmanship and musical talent to back up their playfulness. The understated drums of birthday boy Keith Carne behind the spikey guitars of the original members works well during Nice Guys, and a welcome return to Glasgow by those who turned out.

Young five-piece rock outfit Area 52 demonstrated why Radio 1 had afforded them air-time lately with catchy songs such as What Do You Want? making the Art School Vic Bar twitch shoulders and tap Doc Martens on the chequered floor. Dipping into occasional metal, the Reading teenagers (aged 16 to 19) did enough to prick the curiosity of passing S&D revellers making their way upstairs to the Assembly Room. It was here we watched Glasgow’s favourite hip-hop act Stanley Odd perform tracks from third album A Thing Brand New. The fantastic political and social commentary of Who Am I? had fans echoing MC Solareye aka Dave Hook’s lyrics, while Veronika Electronika’s backing vocals over a slide-guitar on Pastime when Solareye considers his first steps into fatherhood offers a far more tender output from the usual propaganda served by the Edinburgh band.

After an unsuccessful attempt to catch Emma Pollock perform at the CCA due to the sheer volume of attendees squeezed into the small venue, it was all back to Sleazy’s to continue the assault of Glasgow’s pop-rock, female-fronted bands where the Van Thompson twin sisters, Chloe and Hannah aka The Van T’s, were playing. The distorted sound emanating from the Sleazy’s humming amps appeared to be continuing from the earlier segment of the day, only allowing the listener to absorb parts of songs where guitars were less in play. The blessed Growler was a standout in an energetic set although it appeared that the tiring crowd were reluctant to move much to the Van T’s ingenious riffs and melodies.

Beneath the second largest disco ball in Europe, our closing act of the night were Band of Skulls from Southampton. Whether it was Guitar Hero or Jools Holland which introduced BofS to you, this was a thrilling set and the off-kilter guitars on songs such as Sweet Sour swaggered with all the confidence with which one would associate with American heavy-hitters. Russell Marsden’s sexually-charged vocals alongside bassist Emma Richardson offered up the evening’s richest harmonies, and continued the ABC’s fine reputation of closing the festival with quality acts after Albert Hammond Jnr (2014) and Django Django (2015).

All words and images by Stephen Watt.