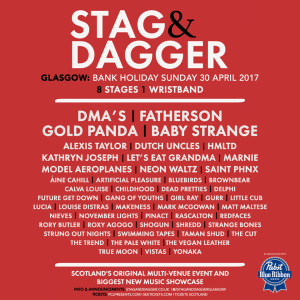 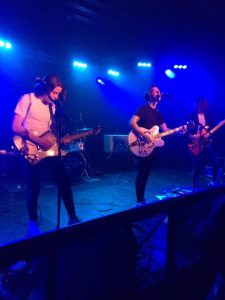 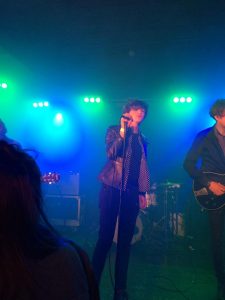 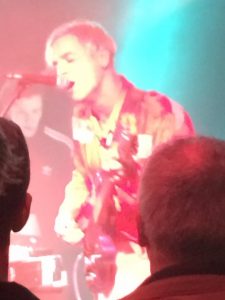 LTW sent Roxy Gillespie to see what Glasgow festival Stag and Dagger 2017 had to offer. Here is what she found.

Sauchiehall Street runs like a main artery through the city centre of Glasgow. Past the chain stores and generic coffee shops, the street gets a little more interesting. Here, the culture of the city begins to show itself. The Stag and Dagger 2017 festival inhabits the venues found on and around this hallowed ground. For a ridiculously low price punters were able to see some amazing talent mostly in intimate settings; grass roots at its best. 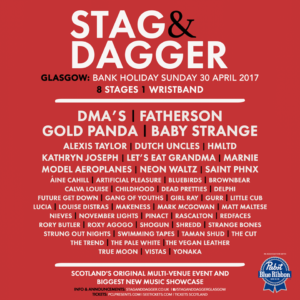 The tiny basement space At Broadcast proved hugely popular- too popular at times. People queued to enter, especially as this was the only venue open between two and four pm. Acts including Lucia wowed the early crowds. Her gutsy power punk played to a capacity audience. With strong vocals and an excellent band to back them, Lucia Fontaine is a rising star on the Glasgow scene.

Rascalton provided more punchy Glasgow punk and the crowd went wild, showing why there is padding on the ceiling beams to protect the crowd surfers. The band pushed the audience into a good natured frenzy.

Just when things were looking like a power-punk festival, Taman Shud hit the Broadcast stage at Stag and Dagger 2017 with something completely different. The London band created a wall of doom-laden excellence that verged on veneration, although to what arcane deity was unclear. Deep and sonorous, yet with often driving rhythms, the band performed an excellent set.

Girl Ray gave a quieter take on the alternative scene. The band had interesting female vocals with unusual intonation and just enough bite to make the set interesting. With acts like Dead Pretties and November Lights and an after party featuring Vistas and The Vegan Leather, Broadcast provided a dazzling core to the festival as a whole.

Nice N Sleazy was situated next door to Broadcast, making it the easiest Stag and Dagger 2017 festival venue switch to perform. With acts such as Louise Distras, Yonaka and Calva Louise, this was another impressive line-up. Childhood finished the night with some soft soul styling from this up-and-coming London act.

The famous Glasgow Art School also provided a couple of performance spaces at the festival. Roxy Agogo, the sporadic manifestation of solo work by Hamish Fingland, played to another packed crowd in the Vic Bar. With some beautiful vocals and beat-driven electronic grooves, the set gave a rare opportunity to hear tracks such as ‘When You Dress Up’ and ‘Crocodiles’ which were superb live. The evening also featuring acts including Let’s Eat Grandma and the stunning Glam Punk of HMLTD.

The Assembly Hall also featured a strong collection of acts presented by Electric Fields with Shogun, Marnie and Dutch Uncles wowing the crowds. Gold Panda finished the night with some redoubtable ambient electronica.

For those relishing a gentler style of music, the space at the CCA provided a sophisticated line-up. Matt Maltese provided a set with subdued keyboards and heartfelt vocals, and other performers included Nieves and Alexis Taylor. The mellower vibe on offer here provided something for those wishing to escape the heat and tumult of the club spaces.

The largest venue, The O2 ABC 1 saw an excellent opening set by local heroes Baby Strange. The band never put a foot wrong, playing to a full hall and managing to get a pit going at the front. The band have quite a strong catalogue of memorable tracks under their belt and their 45 minute set was pure class. With a couple of new tracks including Motormind to add to the favourites such as Pure Evil and California Sun, the crowd was more than happy. Ending on anthem Pleasure City, this was one of the best sets of the festival.

The smaller room at the O2 ABC had another fine set of acts on offer. Model Aeroplanes thrilled with their sunny indie set including Club Low and Fever. The harmonising vocals were sublime and the set was tight and bouncy. A real crowd pleaser.

As the main O2 room saw DMA’s finish their fine indie set, the room became even fuller for Neon Waltz. This was another stand-out performance. The introspective indie was melodic and beautiful, with real quality from the guitars, rhythm and keyboards. Their full sound soared, pleasing the fans and those new to the band alike. Tracks like Perfect Frame and Stronger formed part of a perfect set and a fitting way to end the Stag and Dagger 2017 stage at the O2 ABC 2.

Stag and Dagger 2017 proved to be a hidden gem of a city festival. Both known and emerging talents showed how vibrant the current music scene is and the standard of music on offer both in Scotland and further afield. It also showed the huge support for music in the city of Glasgow, sometimes lacking in other areas of the UK. The venues were full of punters enjoying an extremely strong assembly of bands at an extremely reasonable price. Glasgow yet again proves itself to be a hotbed of talent and creativity. Roll on Stag and Dagger 2018.

All band photographs by Roxy Gillespie