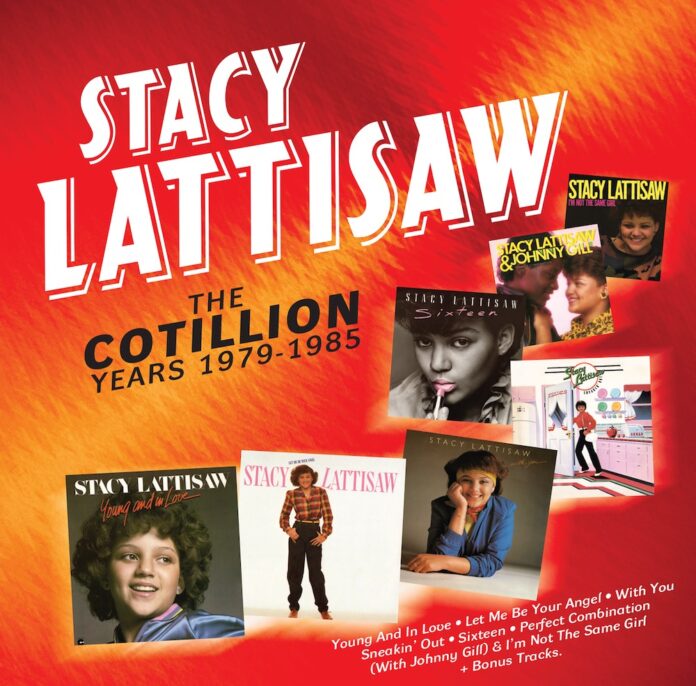 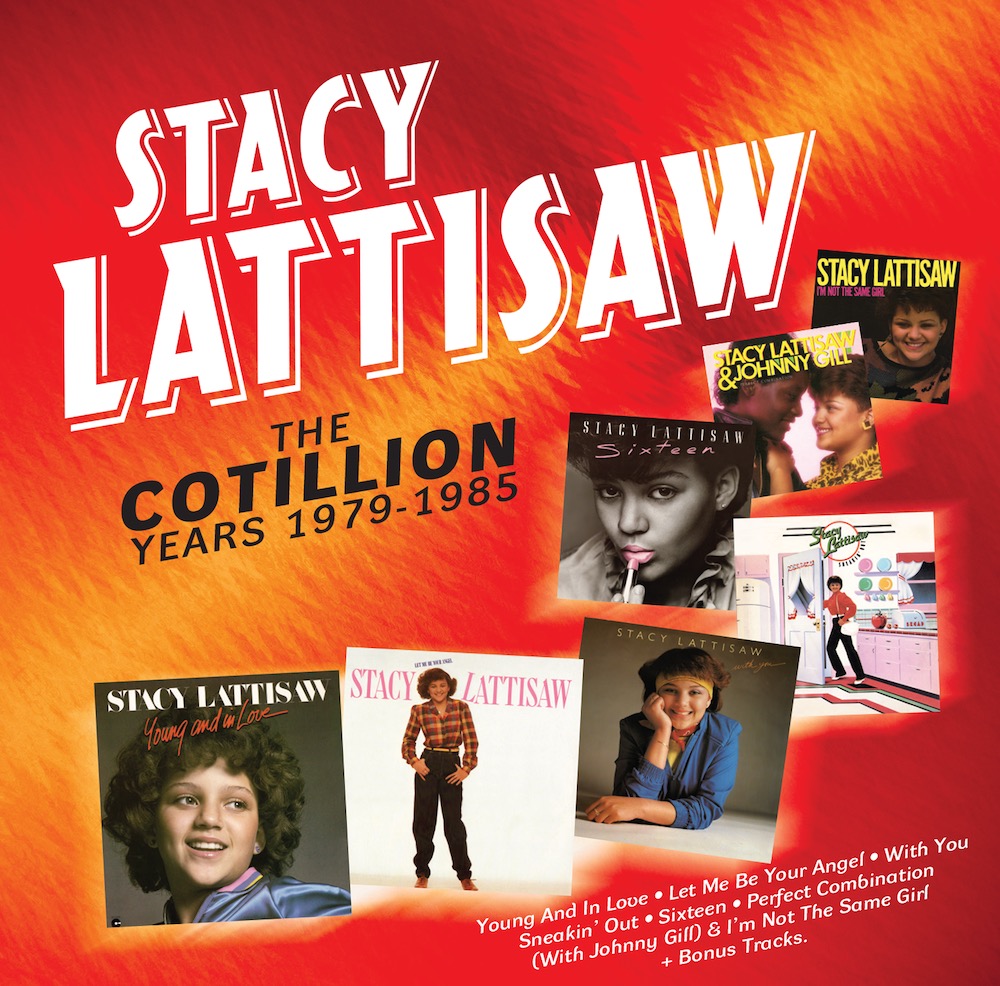 New 7CD set which brings together all seven albums Stacy Lattisaw recorded between 1979 and 1985. She is probably best known in the UK for her hit single Jump To the Beat. Ian Canty hops about lamely to the rhythm…

When I was a kid I looked on the child stars of the era with a mixture of disdain and jealously. Disdain when confronted with the smug children on television desperately trying to read the autocue, having been pushed in front of a camera in order to prove BBC/ITV were down with the kids. Actually the disdain turned into pity, because this was the highpoint of their lives and it would all probably be downhill from there. I never really considered any other downside to fame at the time (and let’s face it there are many). I was jealous too because these kids were clearly pretty untalented, but had somehow found their way to the big time. As as I had no talent as well, then why not me too? For people around my age who had done rather better, the green-eyed monster was there even more intensely, as I imagined they lived a life of total luxury. They probably didn’t even have to go to school either, which was the main benefit I could see in being famous back then. The lucky, lucky so and so’s I thought.

It is a viewpoint that I imagine was not uncommon for youngsters nationwide at the time. I was slightly more charitable to youthful music stars – after all they had to have some extra ability beyond occasionally stringing together a coherent sentence. For instance Stacy Lattisaw. She even had the temerity to be a mere few days older than me when she had the smash hit single Jump To The Beat in the summer of 1980. But to be honest that kind of thing also gave me a bit of hope, something that my lack of any musical ability ultimately stymied. I had to concede that it was fun and a pretty ace dance record, with members of the Chic organisation hovering in the background.

Washington D.C. native Stacy was 12 when she cut her 1979 debut album, having shown a talent for song since she was half that age. After impressing at a free concert given at Fort Dupont Park, she was signed by Atlantic subsidiary label Cotillion Records at the end of 1978 and her first collection arrived in the summer of 1979. Unfortunately Young And In Love is a firmly middle of the road sound, with Stacy’s voice see-sawing between being quite soulful and at the other extreme coming over a bit irritating. The latter is sadly more prevalent, for example on the sugar-fest Three Wishes – if ever a record could rot your teeth, this is it. The title track, a hit for the Flying Pickets in the UK a few years later, slides between both the positive and negative. The song gets a disco refit at the end (plus a 12 inch version as a bonus), which represent one of the few bits of ground given to music more fitting the end of the 1970s on this disc.

She does though do a disco-ish Downtown, but Kevin Turvey aka Rik Mayall modernised the tune better. The Hustle hitmaker Van McCoy, in one of his final projects before he died of a heart attack later in the same year, oversees what is a very easy listening-orientated sound. Spinning Top is a fair go at 60s soul-flavoured dance, but it is difficult not to draw the conclusion that Young And In Love has a very young singer fronting something extremely antiquated.

Narada Michael Walden was brought in to produced the next platter Let Me Be Your Angel and stayed for the four subsequent Stacy LPs. Nile Rodgers and Bernard Edwards of Chic were also on hand and their influence can be heard on the big hit single Jump To The Beat. A year had help knock the more abrasive tones off Stacy’s voice and all was set for a good quality disco pop set. Dynamite, the other single taken from the LP, is a speedy and catchy funk number and the title track is the kind of fairly convincing ballad that the debut failed deliver despite a couple of attempts. Don’t You Want To Feel It (For Yourself) is one of a few efforts on these early records that feel a bit inappropriate lyrically with the benefit of hindsight, but the music is another authentic and danceable slice of the Chic sound. Jazz piano slowie provides a downbeat end for a record that it is for the most part firmly and successfully aimed at the dancefloor. Single versions of Jump To The Beat and Dynamite are appended to this disc.

Cotillion were determined to get as much as they could out of Stacy’s hot streak, even though surprisingly Jump To the Beat itself missed the US pop chart entirely. The result of this was With You rolled off the production line just over a year later in June 1981. Despite lacking the input Rodgers and Edwards this time around, this set is a reasonable selection of modern funk/soul. Opening track and single Feel My Love Tonight is rhythmic and danceable, with a rap section emphasising the “up to date” feel and Screamin’ Off The Top is a cool slap bass and strings floater.

Love On A Two Way Street is the album’s big dramatic ballad and it works fairly well. It was a top thirty hit in America and is an accomplished effort, if perhaps not truly memorable. The title track follows in similar style. I know “fast opening before wheeling in the ballads” was a common gambit in soul music at the time, but I did feel here it took away the momentum of what was a bright start. The breezy and funky Young Girl gets things back on track and Spotlight also drifts along nicely. Another so so slowie in You Take Me To Heaven brings With You to an end. This disc is the first of the set not to have any bonuses added to it, but it is one of the better albums here.

Only another 13 months passed before the next Stacy Lattisaw album came out, with the record label treadmill in full effect. Sneakin’ Out starts with the r&b funk of the title track. It seems amazing that this wasn’t one of the three tunes taken from the LP for single release as it is a full-on dance monster that is up there with anything else she ever recorded. Guys Like You (Give Love A Bad Name) isn’t a bad piece of sunny soul pop either, though things tend to peter out afterwards in a succession of decent but hardly earth-shattering efforts. A cover of Shirley Ellis’ Attack Of The Name Game was released as a single and has some nice rhythmic touches, but is very much a novelty item rap that appears to take The Tom Tom Club’s early work as a jumping off point. A 7″ version is the sole bonus on this disc. Sneakin’ Out concludes with the electro handclaps of I’m Down For You and sleepy ballad I Could Love You So Divine.

By now Lattisaw was right in the groove of putting out an album a year and Sixteen duly rolled out in July 1983. Like its predecessor it begins with an upbeat and funky title track, which is good fun. Black Pumps And Lipstick takes thing on apace, if in a gimmicky way that sounds a little dated today. The cod-Motown drive of Million Dollar Babe seemed a natural single choice, even if it didn’t hit big. Kathy Sledge puts in a sassy guest spot on What’s So Hot About Bad Boys and a breezy The Ways Of Love builds nicely enough. The slower songs don’t really drag either, apart from syrupy set closer Miracles, which was bewilderingly extracted as a single. That instance aside, the other seven are strong and help to make Sixteen the best collections of this set. The extras on this disc are 7 inch versions of two album tracks that were put on single b sides 16 and The Ways Of Love, plus a 7″ cut of Million Dollar Babe.

Next came Perfect Combination, which changes the format by having Stacy duetting with old friend and Johnny Gill. They were partners away from the studio too, which no doubt helped them gel on record. It gets underway with a great dance tune in Block Party, where Gill’s full voice combines well with Stacy’s sweeter tones. The brisk Fun ‘N’ Games is good too, complete with HM guitar soloing. The slow and gentle title track clocked in at a lowly number 75 on Billboard, but was the only single from the LP to reach the business end of the US charts. A cover of The Shirelles’ Baby It’s You and Block Party missed the top 100 completely, which was unfair on the latter in particular. The synths and guitar that drive Heartbreak Look are rather groovy, but for me the album was another one that tailed off again after making a good initial impression. No bonuses on this one, which is odd as there was a 12 inch single version of Block Party at least.

For the final Cotillion LP I’m Not The Same Girl producer Walden, having helmed everything post-Stacy’s 1979 debut, was replaced by Michael Masser. This was not a change that achieved the required upturn in fortunes and soon afterwards Lattisaw decamped to Motown for a three album stint. This 1985 effort though was aimed squarely at the charts and the easy listening stance of the material harked all the way back to her first collection in a way, though this is a far more modern sound. Still, nothing much stands out other than Toughen Up’s flowing pop/soul and one can understand why the link up with Masser produced disappointment all round.

It is certainly an arguable point that Stacy Lattisaw may have paved the way for the likes Tiffany and Debbie Gibson. She retreated from the public gaze at the end of the 1980s, perhaps burnt out by the trials of stardom at such a young age and the gruelling recording schedule that saw her release eight albums before her 21st birthday. Seven of those records are presented here and although there are a lot of enjoyable dance numbers throughout on The Cotillion Years, the need for a fast turnover of material had the inevitable upshot of truly memorable tunes being few and far between.

Sixteen is probably my pick of the seven, with the pretty bad debut being bottom of the class, but all the early to mid-1980s sets have something to recommend about them. Whilst the singles were snappy and infectious, the albums always came up a bit short in my opinion, lapsing into a tried and tested formula. Nevertheless this is a well put together, listenable set on the whole with informative sleeve notes, all of which may be a boon to fans of danceable pop music.