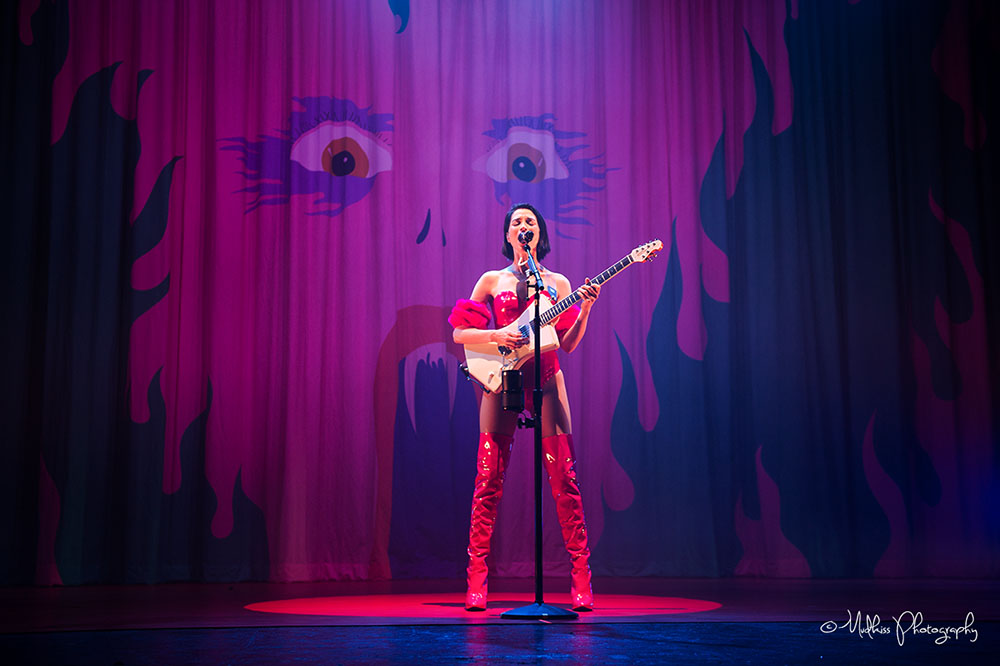 It was an evening of gig-meets-film-meets-theatre as St Vincent – the now five-album artist name of Annie Clark – took to the stage of Manchester’s O2 Apollo on Wednesday 18 October. And by that I mean no ordinary theatre – but an operating theatre. Conflating a gig with a ‘clinical quality’ may seem like an odd concept – but perhaps no surprise in the development of an artist who is no stranger herself to exposing the unnerving.

From the sensual, inviting intrigue of ‘Strange Mercy’ back in 2011 to the distorted drive of her self-titled 2014 album, St Vincent has been progressively pulling back the flesh to reveal a kind of social injury, indignant – as seems to be the case in her new 2017 release ‘Masseduction’’, which the current live tour is showcasing.

First, we started with the operating instruments. No support acts, but a short film ‘The Birthday Party’ (part of the horror anthology XX) introducing a kind of suburban horror – a children’s celebration party torn into by the exposing of one woman’s insecurities… and a corpse. A kind of quiet cut through the filling-in audience like a knife. A sense of intrigue or more like an uncertainty as to how to respond? I felt elements of both.

But what was a stand-out feature of this evening was how St Vincent cut the divide between entertaining the audience and arresting them – she offers no false sense of security – it’s the audience’s turn to stand and take.

And then the procedure began – St Vincent standing statically in the far-left corner of the stage, starting with the track ‘Marry Me’ over soaring strings, her vocals clear-cut and impressive. There was something almost scalpel-like about the start – a kind of determined sharpness as she stood before a backdrop of curtains, the plastic-pink quality of her outfit adding to a sense of seething satire around fetishized femininity. Perhaps it was the rousing riff of tracks like ‘Cruel’, perhaps it was the minimal staging which allowed Clark herself – increasingly the subject of high-profile and tabloid-newspaper sensationalism following her relationship with Cara Delevingne – to keep the audience in suspense, rather than stimulated. 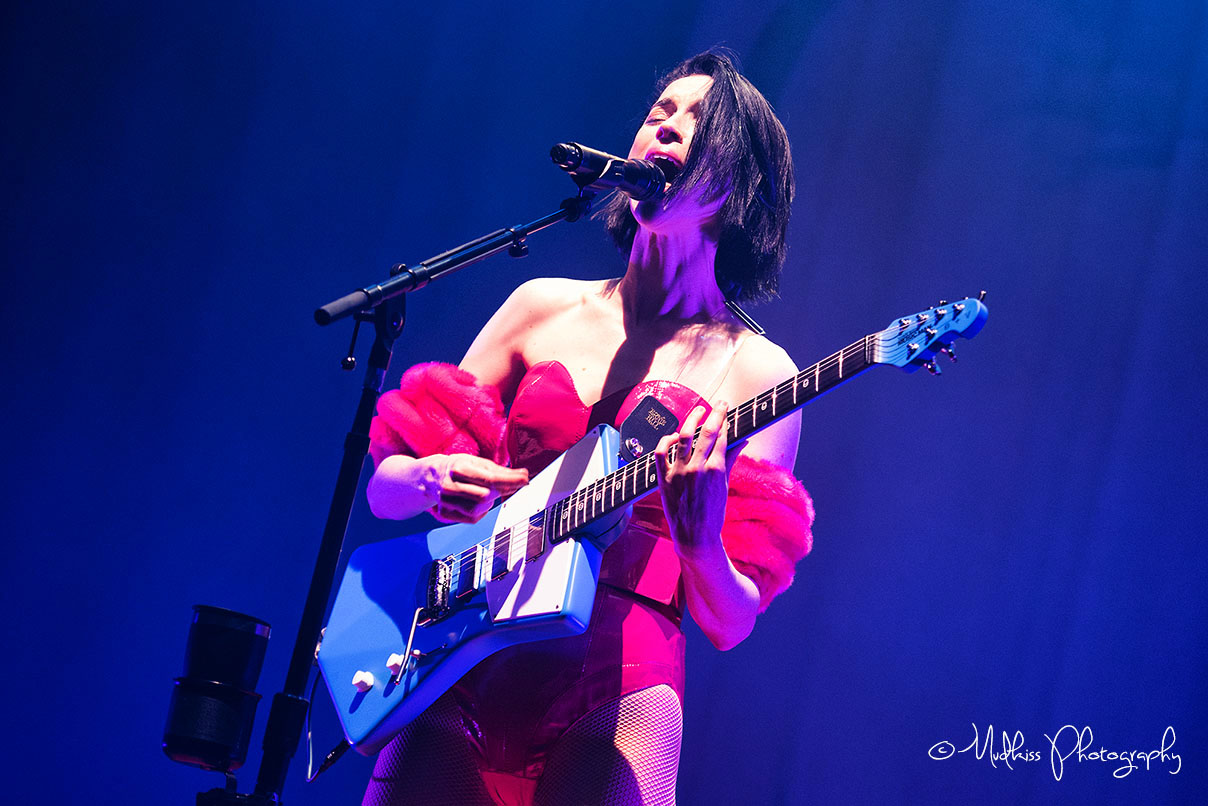 I’ve been the subject of titillation enough, the presentation seemed to say, the performance of St Vincent a defiant stance of an artist now choosing what the viewer sees – the once sabotaged, now becomes the surgeon. The concept of a gig – gutted – certainly interesting. And as she was handed a series of her specially-designed Ernie Ball guitars in their array of colours and angles, the similarities were almost unnerving – the backing track both sonically powerful and yet somehow sanitising. It sounded good. But is ‘good’ what it seeks to convey? Questions add to the intrigue – and the intrigue kept coming – from her clinical precision on ‘Digital Witness’ to her later guitar jamming with a grungy edge for tracks like ‘Sugarboy’, seemingly fluid, faultless even.

“Manchester – a pleasure it is…” – her interaction with audience was minimal and certainly a contrast to previous other Manchester gigs, which gained notoriety in their own right with examples of St Vincent seething over a blistering backing band at The Night and Day café earlier in her career, or climbing all over the interiors at The Albert Hall. Now we were being treated to no such spectacle, instead a highly choreographed set which seemed both cinematic and surgical, isolating and yet impressive. 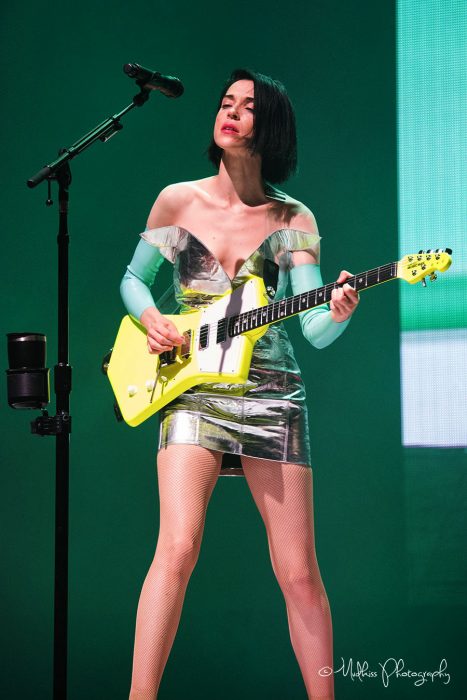 Then it was like the operation had hit through onto the bone – as the billowing curtains were peeled back to reveal a grotesque clown-like female-tinted face, in an evening which felt very much of two halves. The striking synth notes and dark carnality of ‘Masseduction’ was brought to the stage in turn– almost like something to survey; testament to an album which combines gouged-out-glam-rock with feminist gravitas. Opening song ‘Hang On Me’ hit home, whilst the track ‘Sugarboy’ started to expose those fluctuations of identity and desire, alternating the cries of ‘boy’ and ‘girl’.

And yet it was not just an experience that was visceral, but almost primarily visual, as a series of videos featuring St Vincent herself were projected onto a massive backing screen accompanying the tracks – bringing together unnerving characters of desire: pop-colour makeovers, lashings of leopard print, leather-clad dominatrixes, even crushed cake. It left the audience almost with a kind of dilemma – do I watch the artist or watch their art? Watch the artist or watch their art? It was this tension some may think is irritating, but others will see as a stand-out intelligence of St Vincent’s performance, calling on the viewer to question how they engage with music, gender and desire all in one go.

Are we viewers, voyeurs or both? Even when the pop-craziness of ‘Pills’ started up, people still seemed uncertain whether to ‘lose it’ or not, as if swept into kind of overarching suspension – St Vincent stood at a distance on a podium for much of the performance, as if surveying. 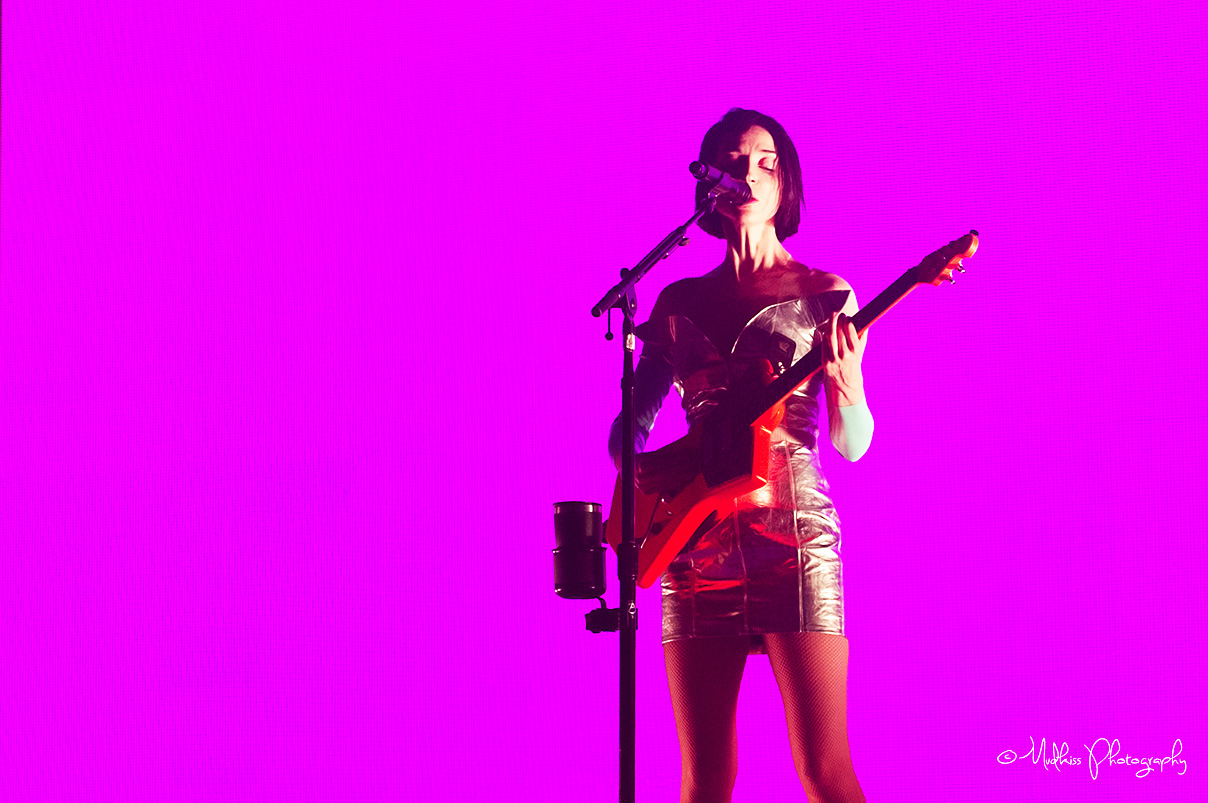 St Vincent creates music clearly meant to experiment and challenge on a number of levels, and the captivating quality is in that we are still incensed by it. Fan-favourite ‘Los Ageless’ still had a gutsiness to the beat and accompanied by her blistering lashes on a lime green guitar, whilst great versatility was shown between the slower, more-lingering notes of ‘Happy Birthday, Johnny’ whilst the awning-openness of ‘New York’ seemed to bring a swell of emotion to her sparkling eyes. Even the surgeon sheds a tear.

For an album which exposes and interrogates the fluctuations and fabrications of seduction, St Vincent’s performance could be considered masterful, wielding and working the guitar with a fine-tuned talent, creatively choreographing the set. Some may not want to stand and watch the surgery – but perhaps that’s the whole point. It’s time to expose and explore the concepts in society that people condemn as sick but so many crave… money, kink, power, fame. So many want to get their hands in them – some do, some don’t.

It’s a dissection of desire, done on stage. What it does the audience is perhaps the thing to be thought – or fought – over. Experimental, arresting and intense.