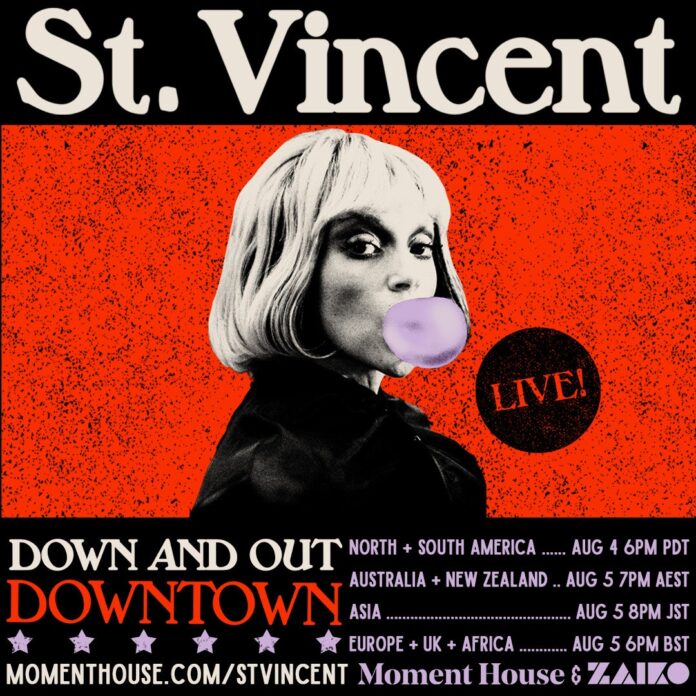 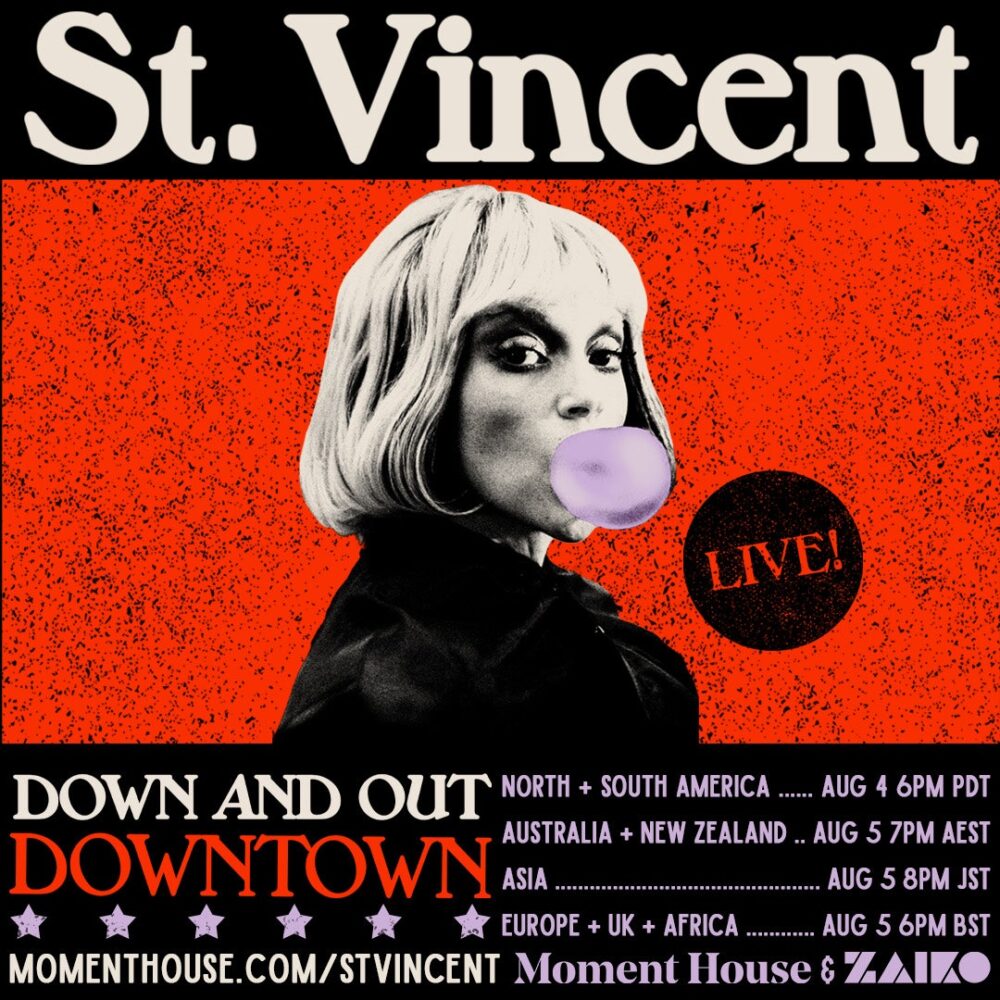 Doubling down on the 70s pastiche of her latest album, St. Vincent delivers a livestream concert like no other. Elliott Simpson reviews.

Annie Clark (aka St. Vincent) has always been chameleonic. With each album cycle, she seems to reinvent herself – just look up the dystopian pop star look she sported for her last album Masseduction – and her latest release is no exception. Taking inspiration from the sleaze of 70s rock stars, Daddy’s Home presents us with a whole new era of St. Vincent, complete with dyed blonde hair and a leather jacket.

This new persona took centre stage during her new livestream concert event, Down and Out Downtown. Online shows from artists have understandably become a trend recently, but it’s hard to think of anyone who’s put as much effort into it as Clark. The special commits itself fully to the theme of this album cycle, from the low-res picture quality – complete with colours bleeding into each other – to the canned applause that’s played after every song.

The members of Clark’s band are also dressed in period-appropriate outfits as well: think patterned shirts, leather jackets and an abundance of sunglasses. The stage is also set up almost like a living room, littering with sofas and chairs for Clark and her backup singers to lounge on.

Still, this would’ve all been for nothing if the music wasn’t there – which, thankfully, it was. Songs from Daddy’s Home make up the bulk of the set as you’d expect, starting with the album’s electric opener Pay Your Way In Pain. Though it doesn’t deviate significantly from the album’s version of the song, it acts as the perfect mood-setter for the rest of the show.

As is always true, the songs that shined the most on stage weren’t necessarily the best ones from the album. Down and Out Downtown – which was one of Daddy’s Home’s more underwhelming cuts – comes to life here. The band fully embodied the song’s laid-back tone, the backup singers lazing on the sofas while Clark languidly plucked out the song’s riff. Similarly impressive is At the Holiday Party, which served as the show’s emotional climax. The live version of the song does a fantastic job of wringing all the lovelorn drama out of the song, offering a roaring finale.

Peppered throughout the set were also a few older songs, coated in the same retro gloss as the ones on the new album. Swapping out the songs’ original sonic palettes for the 70s cheese of vibraslaps and electric sitars, the best of these transformed the old songs into something completely new. The new takes on Strange Mercy’s Cheerleader and Masseduction’s Los Ageless shone in particular, making it almost possible to forget the original versions of these songs even exist.

Digital Witness doesn’t fare as well, not quite surviving the style change. The off-kilter, sci-fi groove of the original is lost in translation and the song can’t help but feel like it’s missing something crucial. New York similarly suffers, though for feeling much too similar to the original.

Another major highlight of the stream comes after the main show has finished, with Clark wrapping things up with a short solo acoustic set and a Q&A segment. In particular, the acoustic set was a real treat. Clark indulged in some fan favourites – including the terrific Laughing With a Mouth of Blood from Actor – delivering them in mesmerising stripped-back format. More than anything, it hints at how incredible a St. Vincent solo tour would be.

Out of all the livestream concerts that have popped up during the pandemic, Down and Out Downtown is one of the finest. And no point did it feel phoned in, featuring the perfect blend of new material and older stuff, including a handful of deep cuts. As someone who felt a little lukewarm on her new album, it definitely helped me see it in a new light.

All words by Elliott Simpson. More writing by Elliott for Louder Than War can be found at his author’s archive and other work in his portfolio.